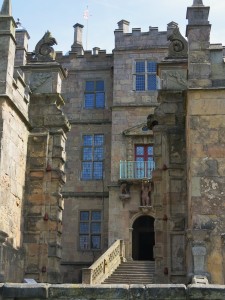 The Little Castle at Bolsover

Visiting two historic sites at opposite ends of England, one enchants and one disappoints.

This year is the 950th anniversary of the Battle of Hastings, the beginning of the Norman Conquest of England and the modern world as we know it.

Is that too much to claim? I don’t think so. The battle was one of those seminal moments in history which changed the world forever. The Saxons were done for and the Normans took over. They united England and Wales in a way that had never been permanent, which eventually grew into the United Kingdom and the British Empire. Without William the Conqueror, none of the following history would have happened in quite the same way.

What was this little battle on the south coast of England and even more importantly where was it?  King Edward, known as the Confessor for his holy ways, died on January 6, 1066, setting off the chain of events that culminated 10 months later in an extremely bloody battle on the Sussex Downs between an English army led by King Harold and a Norman army under Duke William. On October 14 they met and Harold died. William laid claim to the English crown and the rest is history. 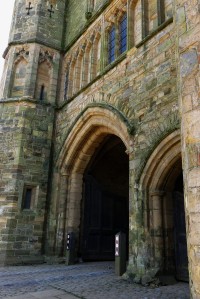 First fact: the Battle of Hastings didn’t take place in Hastings. It took place in or near Battle, nothing more than a series of fields some miles to the north. I was incarcerated in two schools nearby for much of my pre-teen childhood and as a youngster was dragged to the battle site by a sadistic Anglican headmaster from one school and a kindly history teacher from another. The first was much given to caning boys’ bottoms and the latter somewhat given to over affectionately patting boys’ bottoms. Fortunately, I escaped un-caned and un-patted. But I did learn about the battle. I should add that the main attraction of a day out at Battle Abbey was the eponymous girls’ boarding school on-site. The mere sight of these leggy young ladies was enough to get pre-teen boys’ hormones raging. Up skule, indeed. But back to the main story.

After the bloody events of the day, apparently ferocious even by medieval standards, the king vowed to build an abbey on the site where Harold had fallen, in penance for the bloodshed. The monks, however, felt that the site was unsuitable and so there is a chance that Battle Abbey is not really the site of the fight. Archeology, which might prove the issue one way or the other, has been no help. If the abbey was built on the actual site, then the monks would have destroyed all evidence of the battle during construction. However, the claims of nearby Caldbec Hill and Crowhurst notwithstanding, it seems likely that Battle is indeed the true site. An investigation by the TV series Time Team also supports this view. 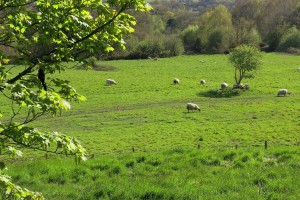 Sheep graze on the battlefield

Fifty years on, or more, I am back at Battle to check out the Abbey and the battle site. Let me say what a huge disappointment it was. In the anniversary year, you would have thought that English Heritage could have gotten their act together and had things ready for this year. But no. The museum is closed for renovations. The main buildings are closed for repairs. The boarding school has taken over the rest of the buildings and sheep graze benignly on the battlefield. There’s literally nothing to see except the ruined backside of the monks’ latrines and a stone where the king allegedly fell.

The explanatory film in the new visitor centre is worthwhile, but the walk around the ruins and the edge of the battlefield is pedestrian. On top of the steep fee, not reduced while renovations are ongoing, there’s a charge for parking. If you’re desperate to see the spot where King Harold allegedly fell then go, but otherwise save your money. Perhaps they’ll have the place ready for the anniversary in October, perhaps they won’t. This is British muddling through at its best. 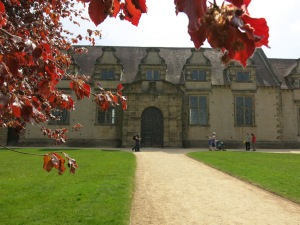 The Riding House at Bolsover Castle

A few days later, I’m further north and taking a look at Bolsover Castle, another pile of ruins. Having had my hopes dashed at Battle, I don’t have high expectations for another English Heritage site. I’d found out that there’s to be a horsemanship demonstration on the day of my visit, so I book a ticket and arrive at the site an hour or so early so I can take in the ruins.

Unlike Battle, the parking is free. The horse show is a mere £3 extra and the gate a tenner. I fork out another few pounds for a good illustrated guide book, which lays out the story of the place very well. Briefly, it’s this. On the site of a long abandoned 11th century Norman castle, William Cavendish in 1617 inherited an exquisite miniature castle from his father. He went on to finish the building, added a very grand series of state rooms in a terrace on the neighbouring escarpment and a splendiferous Riding House, where he entertained his guests with displays of horsemanship. He was friends of royalty, spent years in exile during the Commonwealth, and for services to the returning King Charles II, was named Duke of Newcastle.

On the throne in the Star Chamber

It is for the displays of horsemanship in his wonderful Riding House, that I have come to Bolsover. The art of manège is little seen today, as the showier sport of dressage has dominated for many centuries, but it is fun to see riders dressed as they might have been in 1600s on splendid Andalusian steeds, putting these animals through their paces. Cavendish was a great proponent of treating the animals in his training with gentle care, believing that when a rider and animal were together as a team there should be “one gentleman and one beast and not two beasts.” Today’s display is put on by the folks at Action Horses, who provide the stunt riders, among many other shows, for Poldark. I’m pleased that as I write these words, Poldark wins a Bafta for best television drama series. Having had a long chat with riding master Mark Atkinson, whose son Ben doubles the riding on the show, I almost feel a sense of pride in the achievement. Unfortunately, no photos are allowed. 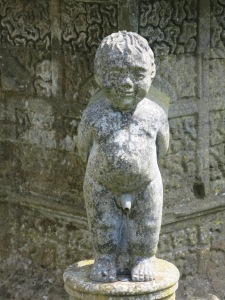 Bolsover Castle did not suffer well after the first Duke died. His son barely visited and the grand state apartments fell into ruin. By the turn of the last century, local mining and subsidence had put the Little Castle in danger of collapse. However, finally English Heritage got hold of the place and has recently done some worthwhile restorations. The wall walk and the gardens are nice, though the lovely and original fountain with little boys pissing into the pond beneath a buxom Venus isn’t splashing. The rooms in the castle are mostly restored and one can see that the Duke must have had a wonderful time entertaining, but there’s no furniture left. A friendly guide, also called Nigel, takes my picture in the throne room. The chairs are all reproduction, he says, so I can sit wherever I want. The tapestries are fake, but look grand. The photographs of tapestries from elsewhere have been Photo Shopped onto coarse material. I don’t care. It adds a little life to the room. In other rooms, some original wall paintings and portraits still hang. It’s hard to imagine how they’ve survived centuries of neglect.

The Cavendishes, of course, are a big deal locally with other family seats at Welbeck Abbey, Hardwick Hall and Chatsworth not far away and all much grander. But in its quiet way Bolsover Castle has something to say and I am thoroughly entranced and entertained by my visit.