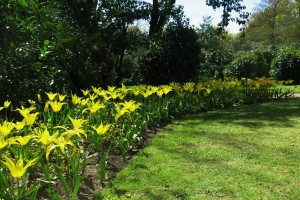 Tulips spread a splash of colour across the bucolic Sussex countryside as I rediscover England and things English.

England in the spring is enchanting. Along every lane where we are staying in South Yorkshire daffodils bloom. When we cross the border into Derbyshire, a mile or so west, the scent of trees blossoming assaults us from every side. In Nottinghamshire, less than 500 yards to the south, acres of rape seed (which Canadians archly call canola) stretch to the horizon with a bright yellow pallet. In the south we discover a lovely private garden thrown open to the public. 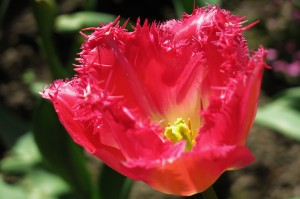 We have been not exactly house hunting, but at least looking at places where, should we decide to return to our motherland, we might settle. The houses have been lovely but unsuitable. A 17th century cottage beside a babbling brook has thick stone walls and oodles of character, but an unnavigable old staircase and tiny rooms. A real Tudor house sits inches from a busy main street. An old stone tannery needs lots, and I mean lots, of money spending on it. And so on.

Unlike North America, where the agent assiduously guides the prospective buyer through the house highlighting every good point with a salesman’s exaggeration and hiding the bad through clever distraction or outright lying, in the UK, the agents do nothing. The receptionist at the office might answer the phone after two dozen rings, might give you the correct directions to find the house they represent, and might warn you that the owner will meet you at exactly such and such o’clock. The person in charge, whom we never meet or indeed speak to, is ominously called the “negotiator.” 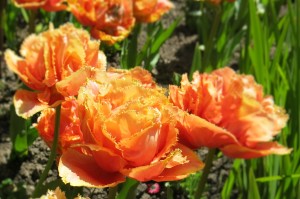 We had clearly forgotten how much we might have changed after 50 years in North America. Not that we think like North Americans, heaven forfend. We are British after all. But I’m reading Bill Bryson’s new best-seller The Road to Little Dribbling: More Notes from a Small Island in which his adventures, as an American revisiting the English countryside after many years, makes wry observations on the differences between the two solitudes. One reviewer says “Bryson can write a page about a cheese sandwich, and make you take the part of the sandwich.” 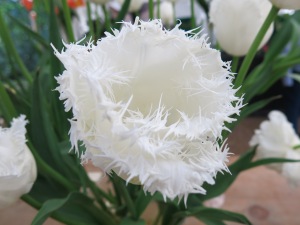 I find that hard to believe. In the local branch of a national coffee chain, I am tempted by an advertisement offering, for a limited time, “The Great British Toastie.” It looks very good in the photograph, with folds of ham stuffed inside and melted cheese spilling out. The reality is somewhat different. I order it at the counter and am told to go and look for it in the chiller cabinet. So this is not going to be custom toasted, apparently. Inside a hermetically sealed bag, sits a thin sandwich, the toast marks already burnt into its pale exterior. The nice lady behind the counter takes my offering, pops it in to the microwave and delivers it to my table a few minutes later. Cut in half it reveals a minute slice of anemic ham which barely covers the interior, along with a miserly scrape of deadly white slime that looks a bit like day old pus. It tastes as bad as it looks. 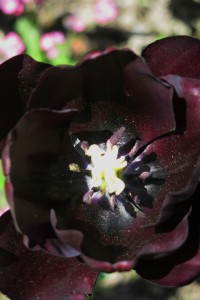 Odes to cheese sandwiches aside, Bryson’s book is hilarious. And I mean laugh out loud funny. So if you love England, buy it. And if you’re thinking of visiting England, buy it. In fact, buy it anyway.

American Scott Waters visited England and learned many things, some of which I repeat.

“Almost everyone is very polite; the reason they drive on the left is because all their cars are built backwards; pubs are not bars, they are community living rooms; you’d better like peas, potatoes and sausage; refrigerators and washing machines are very small; pants are called “trousers”, underwear are “pants” and sweaters are “jumpers;” the bathroom light is a string hanging from the ceiling; “fanny” is a naughty word; there’s no AC; instead of turning the heat up, you put on a jumper; if you speed on a motorway, you get a ticket (Period. Always); you don’t have to tip, really; they took the street signs down during WWII, but haven’t put them all back up yet; everyone enjoys a good joke; soccer is a religion, religion is a sport; cake is one of the major food groups.”

I can personally attest to the fact that every one of his statements is true. But he didn’t say anything about the English passion for gardening. Funny.

Pashley Manor Gardens in Ticehurst, East Sussex, are a splendid example of one eccentric Englishman’s passion. James Sellick owns the Manor, which he keeps private and the gardens, which open from Tuesday to Saturday, he generously shares with the public. The pretty Tudor mansion dates back to 1550 and was further enlarged in 1720. There’s an excellent café on the terrace where a spectacular wisteria blossoms. 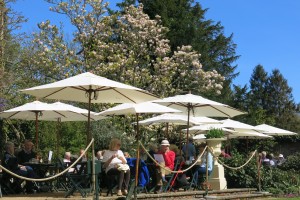 Cake on the terrace

Sellick opened the gardens to the public in 1992, with a modest display of tulips, and the garden has grown from there. The design was by the late Anthony Du Gard Pasley, who was involved over many years. Until his death in 2009 at the age of 80, Pasley was a noted garden designer and landscape architect, who lectured at London’s Inchbald School of Design, the School of Architecture in Canterbury and internationally. He clearly knew what he was doing, for the gardens are a delight of unexpected vistas and surprising plantings. I think the similarity in his name and the name of the gardens is a happy coincidence.

We’ve timed our visit to coincide with the Tulip Festival in April and May. Unlike Amsterdam’s spectacular Keukenhof Gardens, which are only open two months a year during tulip season, Pashley Manor has other offerings to keep it going throughout the year.  Once the tulips are over mid-May, other plants come to the fore, such as lilies, roses, rhododendrons and dahlias, new this year, so this is a three-season garden open until September. 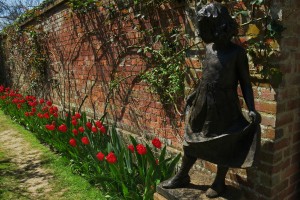 We park for free in a field and pay our entrance fee at a rustic gate. The weather is one of those rare warm spring days, perfect for strolling and enjoying an afternoon tea. And stroll we do, through precise plantings of tulips, around a series of ponds linked by tinkling waterfalls, onto an island of rhododendrons which will be luscious another day and through the rose and kitchen gardens, all waiting to share the promise of summer. Strolling done, we reward ourselves with a proper pot of real tea and share a delicious home-made cake. Ducks from the ponds mooch around our feet looking for crumbs and sit down companionably under the table, ignoring the “don’t feed the ducks” sign.

The tulips really are amazing and come in so many colours and types and styles that I am hard put to describe them. Cleverly, Sellick’s gardeners have under-planted the bulbs with other later blooming flowers so this is not a one note show. Its not as historic or as large as Sissinghurst, a dozen miles to the east in Kent, but very much worth a visit.

Featured image: A bed of Fly Away tulips at Pashley Manor Gardens, Sussex