The spectacular cliffs of Capri provide a stunning contrast to the culture and history of Naples.

The early morning sunlight cast a bright yellow hue across the Bay of Naples as we walked down the gangplank and made our way along the busy pier past the 13th-century Castel Nuovo.

While Naples rarely gets the accolades that befall more glamorous Italian cities like Rome, Florence and Venice, it’s a great port of call – not only as a city filled with Renaissance architecture and historic treasures, but also as a jumping off point for many wonderful nearby venues. For example, it’s just a short bus or taxi ride from the pier to the ruins of Pompeii and Herculaneum, the beautiful seaside town of Sorrento, the sensational Amalfi coast, and the magnificent Isle of Capri. 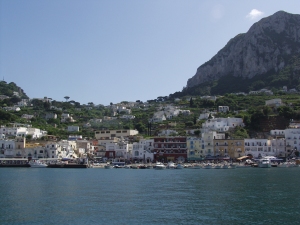 Founded by the ancient Greeks in the 6th– century BC and called Neopolis, the “new city” was eventually captured by the Romans in 326 BC. The Romans loved the natural beauty and mild climate of Naples, and quickly turned it into a vacation retreat area. In fact, they designed and built Herculaneum as an exclusive resort town with large villas overlooking the beautiful bay, lots of nice shops, and water access for boating.

With the fall of the Roman Empire in 475 AD, Naples fell under the control of various invaders including the Goths, Byzantines, and Spaniards before becoming an independent kingdom in 1734, and finally part of the newly formed Kingdom of Italy in 1860. As a result, the city’s historic center, which is blessed with many medieval buildings and an abundance of Renaissance architecture, has been declared a World Heritage Site by UNESCO. 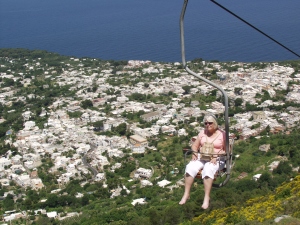 My wife and I were tempted to spend the day walking around the city, but since our daughters had never seen Capri, we decided to catch a hydrofoil at the nearby ferry dock for the 50-minute voyage across the Gulf of Naples to this romantic island. At 40 Euros per person (about CAD$58) for a return trip, it was a much better bargain than the ship’s shore excursion to Capri (including lunch) which was priced at US$175 per person!

Capri is sometimes called the “Island of Dreams,” and as soon as we walked off the ferry at Marina Grande we could see why. High above us were spectacular cliffs with brightly colored villas and a narrow road that wound its way up to the top.

While there’s a funicular that whisks its passengers half way up the cliff face to the town of Capri, it had a long line-up. So we hailed one of Capri’s pretty convertible taxi cabs and made the slow journey up the winding road to the village of Anacapri (30 Euros) at the very top of the island.

My wife, Gail, enjoys the view

For centuries, the only path between Capri and Anacapri was the Scala Fenicia – the tiny, criss-crossing footpath originally cut into the side of the mountain by the Phoenicians. However, today there is a wider (but still narrow) road that ascends the steep slope and provides breathtaking views of the water and coastline below.

Once we reached Anacapri, we stopped for coffees on a small patio and then boarded a chair lift (La Seggiovia) up to Monte Solaro, which at 1,950 ft (595m) is the highest point on the island. There’s an old stone building at the top with a pretty terrace, a small restaurant, and stunning 360 degree views of the entire island and surrounding bays. On a nice day, this is a “must do” trip for anyone who wants to get great photos – in fact, the girls took lots of each other in various poses with the island and bays below them.

After taking the chair lift back to Anacapri, we jumped in a taxi for the short ride (15 Euros) to the town of Capri where we had lunch at a pretty sidewalk café – a wonderful repast of Caprese Salad (buffalo mozzarella cheese with ripe tomatoes), followed by squid ink pasta with monkfish. After lunch, we strolled through the narrow streets of Capri, which are filled with charming villas, trailing blooms and designer boutiques. There are also some delightful cafes in the Piazza Umberto, which is right next to the clock tower and the funicular.

It was now close to 3:00 pm and time for us to travel back along the winding road to the waterfront to catch a return hydrofoil to Naples. As we boarded our ferry and took a final glance back at the spectacular cliffs and brightly colored villas of Capri, we could understood why it known as the “Island of Dreams”. 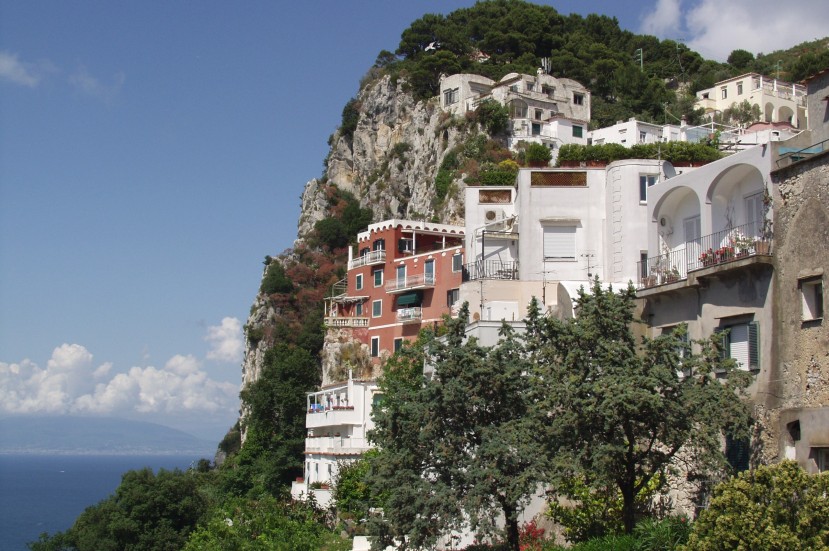