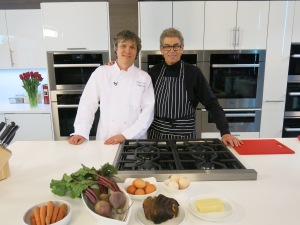 Bart and Nigel, ready to attack the ingredients

If I’d known that making fresh pasta was this easy, I’d have been making it years ago. Now all I’ve got to do is wait for someone to give me a pasta maker. (Anybody listening?)

We’ve been to the Dufferin Grove Organic Farmers’ Market to shop many times, as it’s an easy run from our Annex townhouse. In the winter the market contracts and goes indoors, but in summertime it spreads around the park and snuggles up to the outdoor ovens, where bakers make wonderful fresh breads, cinnamon rolls and pizza treats.

Due to the pressures of our shooting schedule for Market to Table, we visit in January, on a bitterly cold day, and manage to chat with several of the merchants while buying the goodies Chef Bart Pocock has specified on his shopping list for the show, especially smoked organic Berkshire pork and pretty turkey eggs from Jens Eller of Marvellous Edibles Farm.

Chef also lives around the corner and takes his boys there for pizza making in the summer. He tells me they can pick fresh herbs from the park’s herb garden to go on their pie too. Getting them involved is one way to get kids to eat and have fun too. 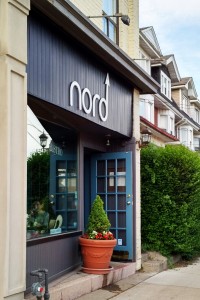 By the time we end up on the kitchen set, kindly provided by Miele, we’ve honed what we’ll make and how we’ll do it. Originally Bart was going to make beet stained pasta, but then he settles on his carbonara concept and feels pasta made with carrot juice will look better. I bring Jens’ fresh heritage carrots and a bunch of beets to the show kitchen, just in case he changes his mind again. Because the pasta has to rest, Bart makes the carrot juice and a batch of pasta in advance in the prep kitchen.

Once we get rolling with the taping, we stop for very little. Some ingredients are made two or three times over so we don’t waste valuable crew time and can skip ahead. As TV chefs and presenters have been saying for ages: “Here’s one I made earlier!”

In pasta, as in life, size apparently does matter and soon big fat hand-made pappardelle noodles are waiting to go into the boiling water. The meal comes together quickly and the crew pronounce it delicious. One of the fun things we’ve introduced is a scene to run under the credits of the crew noshing on the dishes the chefs produce. Nothing is left over at the end of each taping, I can tell you.

During the taping Bart tells me about the new restaurant he’ll be opening in the spring, and by the time we broadcast the episode, his Nord Bistro has indeed opened on Dupont Street. I drop by for dinner and, yes, the home made pasta is outstanding. 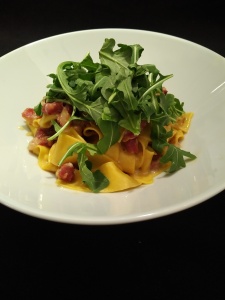