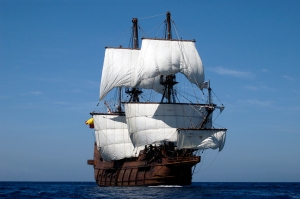 An array of unusual sailing vessels of yore have arrived in Toronto for the long weekend as part of The Redpath Waterfront Festival.

The most unusual vessel in the array of Tall Ships to arrive on Toronto’s waterfront this week, was the Norwegian replica Viking long ship Draken Harald Hårfage. Far from being a tall ship, it has a short stubby mast to hold its traditional rectangular sail, offset by sweeping clinker-built lines and an imposing dragon figurehead rising above the bow. 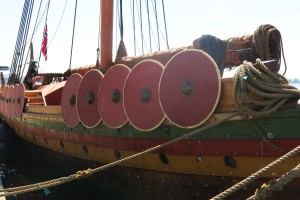 The open boat left Norway on April 26, 2016, for the Atlantic crossing in the path of Leif Erikson a thousand years ago. They travelled from their home port in Norway, via the Shetland Islands, Iceland, Greenland and Newfoundland. Captain Björn Ahlander said: “The work onboard is heavy, wet and cold, therefore it demands great mental and physical condition. There’s no privacy for the crew, they are exposed to rain and cold weather, with only short breaks for sleep. The stretch from Greenland to Newfoundland has been the toughest. We have endured heavy gales, icebergs, breaking waves and a stretch with no wind at all.” Nevertheless, these tough modern-day Vikings have arrived safely in Toronto and look ready to take on visitors over the long weekend. 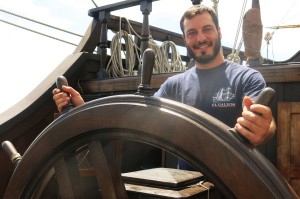 José at the helm

By contrast, the 16th century Spanish replica galleon El Galéon is majestic and fat, with the blunt bow and chubby hull of that era, when the Spanish treasure fleet sailed from the Caribbean and English pirates tried to take the gold away from them. Launched in 2009 and completed in early 2010 in Spain, her first voyage was to China, via the Suez Canal. She crossed the Atlantic three years ago, sailing the traditional route from the Canary Islands to Santo Domingo in the Caribbean on the Westerly Trade Winds, she sailed 80 per cent of the time and made the voyage in 27 days. Since then she has been cruising off the Atlantic seaboard. Her voyages have logged 40,000 nautical miles to date. 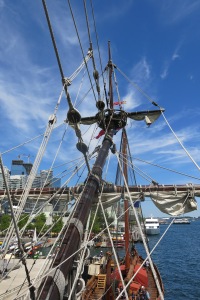 The galleon’s bowsprit towers over the Viking long ship

The crew of 20 are all needed to set the sails, which takes about three hours of hard labour, crew member José Manuel Ambrosio told me as he showed me around the ship shortly after she docked in Toronto yesterday. Sadly, all the cannons on this merchant galleon are replicas and don’t fire. The noble quarters in the stern are off limits to crew and visitors alike, although we can peer in and see how the vessel’s rich owners would have lived in olden days, including the privilege of a pot under the bed, rather than the very public heads in the bow. The bowsprit of El Galéon towers over the Draken moored just to the East, with two extraordinary square sails I’ve never seen before. The first is called the ‘cebadera’ or flying jib, and the front and smaller one is called the ‘sobrece badera’ meaning in front of the flying jib. It’s topped with a curious small crow’s nest, named the ‘widow maker.’ Any crew member falling from there had no hope of survival, José added.

Ship manager Fernando Viota showed me the modern wheel, an authentic replica, but now powered by hydraulics. In olden days, it required two crew members to haul the rudder around, but today’s helmsman can turn with two fingers. A beautiful brass compass is boxed at the wheel and points directly north, towards the CN Tower. Behind is a small cabin containing all the modern electronics required for safe navigation and communication.

A fascinating and weathery ship, with several decks for the public to explore over the next few days. 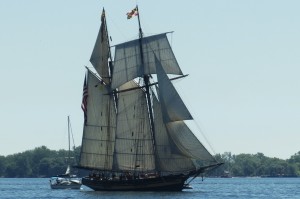 A true tall ship is Pride of Baltimore II, an 1812-era topsail schooner, with towering back swept masts built for speed and manoeuverability. She pulls into the dock at Harbourfront last and nestles snugly behind the galleon, whose aft galley towers over her slender bowsprit.

Built in Baltimore’s inner harbour, she was commissioned in 1988 as a sailing memorial to her immediate predecessor. Baltimore Clippers were designed to outmaneuver the heavier ships of the Royal Navy. In addition, at least one of the replica guns aboard really works, as we heard just before she docked on Thursday this week.

On Sunday, July 3, the final day of the festival, the Parade of Sail at 1600 hours will include all participating ships and unique local vessels. The ships will tour the harbour and then sail along Toronto’s dock wall from west to east.

My little sloop Peccavi will be sailing in the harbour and trying not to get in the way.