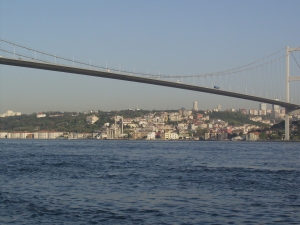 “Without a doubt, Istanbul is certainly the most beautiful place of the world.”  – Gerard De Nerval, French poet

We could hear the mid-day call to prayer as the Celebrity Solstice sailed past the soaring minarets of the Blue Mosque on its way to Istanbul’s cruise ship terminal.

A bustling and intriguing city of some 14 million people, Istanbul has at various times been called Constantinople and Byzantium, served as the capital of three empires, and been home to 13 civilizations spanning a breathtaking 10,000 years. It is also the only city in the world that spans two continents (Europe and Asia), which are linked by a series of bridges over the busy Strait of Bosphorus. In fact, many who live here reside on the more suburban Asian side, but work in the crowded downtown European section. 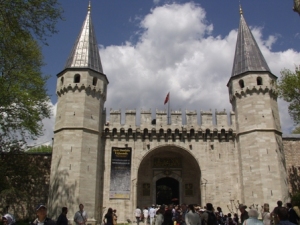 Since our ship was only in town for an afternoon and morning, my wife Gail and I decided to take a tour that spanned both days in order to get the most from our visit. Luckily, many of the major sights of interest are situated close together in the Old City, as this part of Istanbul is almost permanently mired in traffic gridlock.

Our first tour stop was the Topkapi Palace, which for hundreds of years was the centre of Ottoman power and in its heyday was home to up to 5,000 people, including the harem, all serving the needs of one man – the Sultan.

There are some magnificent collections housed here, including 4th and 5th century celadon porcelain (favoured by the sultans as the pigments are purported to react to poisons by changing colour), and samples from the priceless treasury collections, including the richly bejeweled Topkapi dagger (made famous by the movie in which Peter Ustinov attempts to steal it), elaborate gold and jewel-encrusted thrones and furniture, and the egg-sized 86-carat Spoonmaker’s diamond.

After ogling some of the biggest and rarest jewels the world has to offer, we took a brief walk to the nearby Blue Mosque. Considered one of the finest examples of Ottoman architecture, it was commissioned in the early fifteenth century by Sultan Ahmet I. At the time, the design of the Mosque was so grand that it was considered impossible to build.

Today, its domes and gold minarets still dominate the skyline, and it is the only mosque in the world to have as many minarets (six) as the mosque in Mecca. There is nothing blue about the exterior of the Mosque, however, which takes on various hues depending on the mood of the sun and time of day. But once inside, we were struck by the beauty of its 21,000 blue and white Iznik tiles which create a calm and graceful interior.

Early the next morning we began our tour with a trip to the Asian side of the continent for a photo op of the city’s European skyline, and then returned across the Bosphorus to a carpet store in the Old City. Plied with local drinks ranging from Turkish coffee, apple tea, or, for the adventurous, raki (an anise flavoured spirit similar to Greek ouzo) we were given a short talk about the history of Turkish carpet making and the variety of types and price ranges.

While some stayed to purchase, we made our way to the nearby Grand Bazaar, a rabbit warren of over 4,000 shops and stalls spanning more than 60 streets and 20 stone gates. Although there is evidence that a marketplace of some kind existed at this location for many centuries, the present design only dates back to the 19th century, when the bazaar was restored following the 1894 earthquake. The energy is high as locals and tourists alike haggle over everything from antiques to Turkish delight, to clothing and jewelry.

After leaving the bazaar, we strolled through the ancient Hippodrome, home to the omnipresent Egyptian obelisk carved from a single piece of granite around 1500 B.C. The Hippodrome is located right next to the magnificent Hagia Sofia, which was originally constructed by the Emperor Justinian as a church in 537 AD. Although the building maintained its status as the largest Christian church until the 15th century when it was converted to a mosque by the conquering Ottomans, it was turned into to a museum in 1935 by Mustafa Kemal Ataturk, the founder of the modern-day Turkish Republic.

The Sophia features many beautiful frescoes and mosaics, and has a magnificent dome that at 56 metres (about 15 storeys) high is spacious enough to house the Statue of Liberty with room to spare. In spite of having been extensively modified over the ages, it remains an inspiring architectural marvel and, like Istanbul itself, a fitting monument to the incredible civilizations that have lived and thrived in this part of the world for so many millennia.