ON THE SUBJECT OF RESTAURANT CRITICS 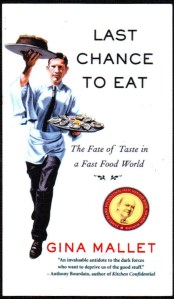 Chris Nuttall-Smith was the second best restaurant reviewer I’ve ever read on Toronto’s culinary scene. My late friend Gina Mallet was the best.

Nuttall-Smith announced in a column in The Globe and Mail on September 24, 2016, that he was writing his last column. Both he and Gina managed to capture the essence of a restaurant, the food and what the chef was trying, not always successfully, to accomplish. Gina wrote until she was too ill to continue. Nuttall-Smith’s reason’s for writing his last piece was not announced. More research was needed.

“… now, the bespectacled, fit and youthful-looking critic will be in front of the cameras… He says he’s working on a television show about food, though he wouldn’t divulge details,” says a column on CBC News’ website.

I wish Nuttall-Smith good luck in the hotly competitive world of television food shows. I know how tough it is because I have my own food show, Market to Table, albeit on the almost invisible Bell Fibe TV1 channel. Throughout his time as a restaurant critic Nuttall-Smith made a point of being invisible, just as that long-time arbiter of food taste Joanne Kates hid behind a giant hat. Breaking out of self-imposed invisibility will be a challenge.

Gina was a quite different person, not at all invisible.  At the time of Gina’s death in July 2013, I wrote:

“Our friend Gina Mallet has died. What a loss to the writing community and what a loss of a truly interesting person.

“As two single British women, Gina and Diane were friends and from time to time Gina asked her to be her companion when she went out incognito to do her devastating restaurant reviews. Later I tagged along – she jokingly dubbed us the OMC: old married couple.

“We went with her to Morgan’s on the Danforth, where she was kind to the neophyte chef. We accompanied her to The Hot House on Front and Elle ma dit, on Baldwin. We discussed the merits of fresh truffles at the Niagara Street Café and there were more over the years. Always we were amazed how she could write such plangent reviews, with a few notes scribbled on the back of an envelope. Her memory for what she had observed was impressive, considering how much fun we always had – and how much wine we finished off. We loved her for her quirky British humour and her vast intelligence. There wasn’t a subject she couldn’t tackle and write about like an expert. In New York, she worked at Time and she came to Toronto to become theatre critic for The Toronto Star.  Writing at the National Post about food she really showed her stuff. A true journalist. 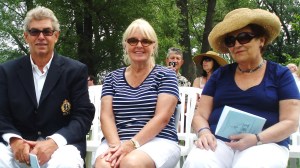 Nigel, Diane and Gina at the Blessing of the Boats, Toronto Island

“She came sailing on my boat a few times, and always brought home-made sandwiches. In later years she found it hard to get on and off the boat. We always imagined she was a contemporary, not one much older than us, but already her strength was fading.

“At her house, at one of her inimitable dinner parties, where a dozen of us crammed into her Rosedale bachelor flat around a makeshift table on mis-matched chairs, she passed around a photograph of herself as a young woman. The picture was taken by her former school chum Lord Snowdon. She was heartbreakingly pretty. I wonder if she ever broke a man’s heart, for as far as we know, she never married. We mourn that girl of long ago and our wonderful writer friend of later years. She was my inspiration and we will miss her sparkling company.”

Some weeks after her death, we went to a marvellous party (as Noël Coward said it, first and best).  On that occasion, I wrote:

“The party we’ve been to was such a good party that I wished our late friend Gina Mallet, in whose honour and memory it was given, could have been there. Gary, our gracious host and his wife, opened their lovely Wychwood Park home for Gina’s strange collection of strays and friends. We had stumbled into friendship with Gina through a book launch, and then accompanied her on many restaurant reviews for the National Post. She came to our house and dined with our friends, who were circumspect about her often very right wing views; but nobody came to blows, as they sometimes did (verbally at least) at her flat where she in turn hosted some really crazy dinners.

“Indeed, I said to one of her oldest friends, that when my turn came, I would like to be the centre of attention at my last party and thence to slip away gently into that good night, contrary to Dylan Thomas’ suggestion. It’s all in the timing, he replied and I concurred.

“The meals at Gina’s, Gary remembered, ‘… were Homeric in their scope: they lasted the average length of a speech by Fidel Castro or the time it takes to get a bachelor degree from our local university. Alcohol was involved. The conversation was lively. Mostly Gina lay in wait … then went in search of all (contrary) notions, either half-baked or ill conceived. When she was done a truce was called in order to recover the dead, while Gina re-loaded.’

“Gina’s nephew was there from England and had brought over, displayed on all the tables around, the entire contents of Gina’s library. We were invited to take as many books as we wanted, or could carry. Diffidently, I asked if I could take one particularly big book. Take more, he cried, take this one, and this one. I prowled around and took several great cooking books, especially those with Gina’s bookmarks of torn pieces of paper in them. Some of the scraps had cryptic notes on them, most indecipherable. Clearly I have undertaken a Sisyphean task. Now I simply have to read all these books and find out what she was thinking when she read them.

“I took two books authored by other Nigels – Nigel Slater’s The Kitchen Diaries and Nigel Nicholson’s Portrait of a Marriage. I took The Wooden World, a dry but fascinating book on the history of the Royal Navy in the 18th Century. Then there was The Food Chronology, The Short Life and Long Times of Mrs. Beeton, History of Food, From Julia’s Kitchen, and Food, A Culinary History. Room was made in the bookshelves for the new arrivals.

“Being a sailor, I immediately stuck my nose into the Royal Navy book, which focuses on the period around the Seven Years’ War, and explodes many of the myths I’d come to love in the books by O’Brian and Forester. It might have been a bit much for Gina, and I’ll never know why she had it in her library, but from the way the spine cracked, it’s possible she never read it. Perhaps it was merely a book review assignment.

“At the same time, I’m reading Food in England by Dorothy Hartley, this edition published shortly before Hartley died in 1985. She was a respected historian, and clearly an English cook of the old school. Lots of meat to digest here. If I find some good English recipes, I’ll try them out and share them here. More fascinating is The Food Chronology: A Food Lover’s Compendium of Events and Anecdotes, from Prehistory to the Present by James Trager. Bookmarks abound. What fascinating fact did she intend to reference on page 188? Was it the 1793 introduction of Minton willow pattern blue and white porcelain tableware; or was it the 1794 fact that one French general of brigade Napoleon Bonaparte, 25, offered a prize of 12,000 francs to anyone who can invent a means of preserving food for long periods? Mostly these seem to be sources for some of the incredible knowledge that Gina tucked away and scattered throughout her restaurant reviews.

“Sadly, copies of Gina’s own 2005 book – Last Chance to Eat: The Fate of Taste in a Fast Food World – were only available in Polish, but I kept a souvenir business card to use as a bookmark. Her book won the James Beard Award. It’s not on Amazon, but you can borrow a copy from the Toronto Public Library.

“For me, Gina will live on in our library, and I look forward to finding new tidbits of information, tucked away between the pages in her scribbled little notes. What culinary adventures will Gina’s notes take me on tomorrow, I wonder?”

Material in this story was originally published in July and October 2013.