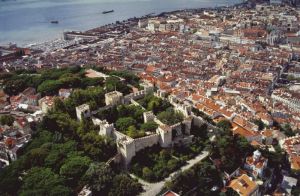 During the “Golden Age” of Portugal, Lisbon was one of Europe’s greatest cities. And Iberia’s city on the Tagus still shines bright.

The ramparts of the historic Castelo de Sao Jorge rose from the early morning mist as the Emerald Princess sailed up the Tagus River from the Atlantic Ocean into the port of Lisbon.

Founded by the Phoenicians around 1200 B.C., Lisbon has been ruled by a number of invaders over the centuries including the Greeks, Romans, Vandals, Visigoths and Moors. In 714 A.D., the Moors occupied “Lissibona” and over the next 400 years enriched the city by erecting beautiful mosques, cultural institutions and public buildings. When Lisbon was retaken by Portugal’s Afonso 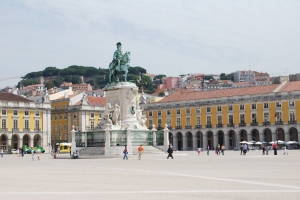 Henriques in 1147, the Christians began blending European styles of design with the city’s existing Moorish architecture.

Unfortunately, many of these beautiful buildings were destroyed during the great earthquake of 1755, when two-thirds of Lisbon was reduced to a pile of rubble. However, the disaster provided city planners with a clean canvas, and they created a magnificent new landscape of grand squares, beautiful palaces and elegant Manueline-style gothic churches that today rival any city in Europe.

My wife Gail and I began our walking tour in one of those grand squares, the Praca do Comercio, which is located near the river in the lower business district of Baixa. One of three main neighbourhoods (bairros) in the city centre along with the Bairro Alta and the Alfama, the Baixa is a series of long avenues lined with shops, bakeries, and restaurants that run for about 10 blocks from the Praca do Comercio straight up to Rossio Square. 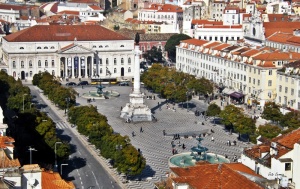 If you like pastry, it’s impossible to walk past the windows of the local bakeries that are filled with sinful but delicious treats like Portuguese custard tarts. We bought a package of six tarts to share with our waiters back on the ship, but they were so good they were finished before dinner!

Eventually, we made our way up Rua Augusta to Rossio Square, which is surrounded by pretty buildings including the Teatro Nacional de Dona Maria II, and a series of 18th-century shops and hotels. The square is lined with traditional mosaic pavement, and is graced with two baroque fountains and a large statue honouring Dom Pedro IV. 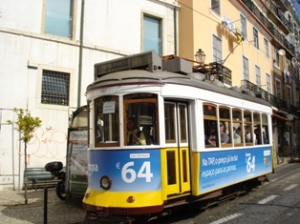 At this point, we had to make a choice between taking the Ascensor de Santa Justa up to the Bairro Alta to the west, or taking the tram up the steep slope to the Castelo Sao Jorge to our east. Made of iron and decorated with filigree, the neo-gothic Santa Justa elevator connects the lower district of Baixa with the higher Bairro Alto some 32 metres above. It also provides a stunning view of Rossio Square, the earthquake induced ruins of the 14th-century Carmo Church, and the historic Castelo Sao Jorge. However, we decided to skip the elevator in favour of a tram ride up to the castle, and a return walk through the fabled Alfama district.

Perched high above Lisbon, the hilltop fortress of Sao Jorge was built by the Visigoths in the 5th century, enlarged by the Moors some 400 years later, and supplemented with new additions by the Christians beginning in the 12th century. The medieval-looking castle has three distinctive parts: the old castle, the Citadel and the Alcacova Palace, which was home to the Portuguese monarchy until King Manuel built a new palace by the Tagus River in the 16th century. 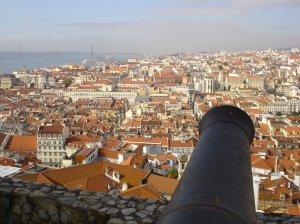 The views from the castle’s ramparts are amazing, and provide a panoramic vista of the entire city stretching from the grand squares of the Baixa, to the red-tiled roofs of the Moorish quarter of Mouraria, to the narrow, sloping alleyways of the Alfama, and to the great Tagus River at the foot of Lisbon where our ship was moored. Within the castle’s walls, there are several statues, including one honouring Martim Moniz, the nobleman who sacrificed himself by jamming his body in Lisbon’s gates during a siege so that Christian forces could gain entry to the walled city.

After touring the castle, we walked along a series of winding alleys to the nearby belvederes of Portas do Sol and Santa Luzia where we had a beer and enjoyed the marvelous vistas, including spectacular views of the churches of Santa Engracia and Sao Vicente de Fora. The Santa Luzia Belvedere is next to a small garden which backs onto the tiny Church of Sao Bras, where there’s a beautiful blue and white mosaic portrait depicting the Praca do Comercio before the earthquake of 1755. 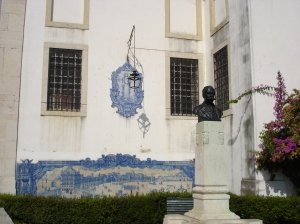 Mosaic depicting Praca do Comercio before the earthquake

We were starting to get hungry, so we walked down the hill through the winding streets of the Alfama in search of a place for lunch. Lisbon’s medieval quarter of the Alfama was the lone neighbourhood to survive the great earthquake, and it still has houses from the 15th century (the only ones remaining in the city), winding alleys, endless flights of stairs, and authentic taverns with fado music (the national ballad-style singing of Portugal).

During the national “Saints’ Days” celebrations in Portugal, the Alfama becomes a massive street festival where locals put up decorations and set up stalls to sell wine and grilled sardines. However, while the area’s heritage may stem from Muslim aristocracy, the Alfama today is one of Lisbon’s poorer districts and can be a dangerous place to visit at night. 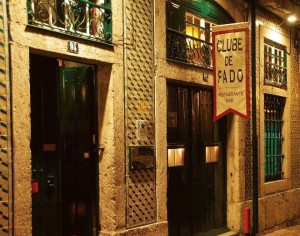 After our long walk down from Castelo Sao Jorge, we eventually found a wonderful place for lunch in the Baxia called Joao do Grao at 222 rua Correeiros, not far from Rossio Square. Gail ordered the Pork and Clams Alentejana, while I had the grilled whole sea bass with green beans and boiled potatoes. The food and bottle of Portuguese red wine were delicious, and so was the price at under $50 Euros.

It was now time to return to our ship, so we returned to the Praca do Comercio and caught a taxi back to the pier (10 Euros). As we travelled along the waterfront on our way back to the Emerald Princess, we looked back at the Castelo Sao Jorge and the beautiful city that rests beneath it. In the “Golden Age” of Lisbon when Portuguese navigators had pioneered the exploration of Asia, Africa and South America at the end of the 16th-century, this city had grown to be among the grandest in Europe. After spending a day wandering through her historic castle, grand squares, gothic churches and charming neighbourhoods, we could see why Lisbon was still Iberia’s golden city on the Tagus.