OVER THE SPANISH MAIN TO THE SOUTHERN CARIBBEAN 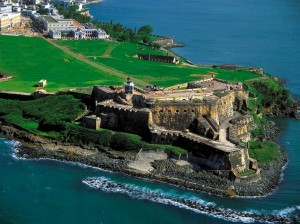 A cruise from San Juan delivers more ports in less time than a traditional sailing from Florida.

It was midnight before our cruise ship slipped past the headlands of San Juan Bay on its way from Puerto Rico to the idyllic islands of the southern Caribbean.

Behind us, the moon cast a pale light across the fortifications that once that once made this city one of the best protected in the West Indies. Even English buccaneer Sir Francis Drake, who successfully pillaged most of the Spanish Main, couldn’t breach the city’s defences provided by San Felipe del Morro and San Cristóbal. The two weathered fortresses still preside over San Juan harbour today. 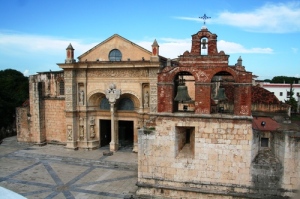 Discovered by Christopher Columbus and eventually settled in 1521, Puerto Rico’s strategic location at the base of the Greater Antilles made it key to protecting Spain’s trade with colonies in Mexico, Panama, Peru and Colombia. It also kept the British, French and Dutch from expanding into Spanish territory from their colonies to the southeast in the Lesser Antilles.

While Spanish galleons no longer seek refuge in San Juan harbour, modern cruise ships have discovered that Puerto Rico is ideally located for seven-day cruises to the Southern Caribbean.  Ships that sail round-trip from Florida on week-long cruises cannot make it to islands as far south as Barbados, and only have time for three Caribbean ports of call.  In contrast, within 12 hours of departing San Juan our ship arrived at the first of five ports we would be visiting during our one-week cruise.

Located on the island of Hispaniola which it shares with Haiti, the Dominican Republic was part of the first permanent European settlement in the Americas and is today the most visited destination in the Caribbean. The country’s capital of Santo Domingo is not only the oldest colonial city in the Caribbean, it’s also the largest with a population of nearly three million in its greater metropolitan area.

My wife Gail and I decided to take a taxi tour of the city since it’s often cheaper than the bus tour offered by the cruise line, especially if you get another couple to share the cost with you.

Our tour covered the main highlights of the capital, including the 16th-century Cathedral of Santa María la Menor (the oldest in the Western Hemisphere), the National Pantheon and the Columbus Lighthouse. The Pantheon is a national monument to the country’s greatest heroes, while the Lighthouse houses the tomb of Columbus (at least, according to Dominicans who claim the wrong body was dug up and sent back to Spain many years ago).

Known as “Little England”, Barbados is so British it had its own Trafalgar Square and statue of Admiral Lord Nelson before Britain did.  Even today, school children wear uniforms, cricket is the national sport, and remnants of the British Empire have been proudly restored.

We opted for a two-hour island tour which took us to three historic sights – Gun Hill, Sunbury Plantation, and Heritage Park.

Located 728-feet above sea level, Gun Hill was part of a system of signal stations which used semaphore arms to communicate across the island. The view is lovely, but the station is more fondly known for its statue of a British lion carved out of solid limestone coral in 1868 by Colonel Henry Wilkinson. Sunbury is a completely restored 300-year old plantation house in Saint Philip Parish with crystal chandeliers, antique Bajan furnishings, a magnificent 19th-century mahogany dining room table, and a unique collection of horse-drawn carriages. Heritage Park, which started life 350 years ago as a plantation and sugar factory, today houses a museum and a working rum factory where we sampled the local product.

After sailing all night, we arrived in Dominica the next morning, some 173 miles northwest of Barbados.

A small island even by Caribbean standards, Dominica is popular with eco-tourists who love its pristine rain forests, majestic mountains and undeveloped countryside. This unspoiled paradise is home to many rare species of plants and animals, including the large purple-breasted sisserou or imperial parrot, which is near extinction. Dominica is also home

to the last remaining tribe of Carib Indians, one of whom served as a guide on our four-hour “Best of Dominica” bus tour.  The excursion included a hike through Trois Pitons National Park to the famous Emerald Pool, and a tour of Dominica’s botanical gardens, founded before the turn of the 20th century as an annex to London’s renowned Kew Gardens.

We then sailed 140 miles to the island of St Kitts. The first English settlement in the Leeward Islands, St Kitts is known as the “mother colony” of the West Indies because it was used as a home port for settlers moving on to the nearby islands of Tortola, Antigua and Barbuda. Given the strategic importance of the island, it’s not surprising it has one of the largest fortresses in the British West Indies which covers more than 30 acres on the aptly named Brimstone Hill.  We hired a cab and went to the Caribelle Batik artists at Romney Manor.  Batik artists use the ancient Indonesian dye resist process of Batik to produce a range of clothing and wall hangings. 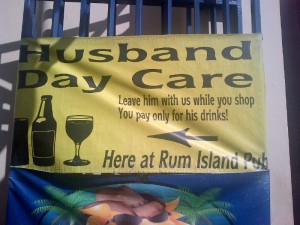 The next day, we arrived in the US Virgin Island of St Thomas, some 190 miles away. We spent the last day of our cruise getting a bird’s eye view of the surrounding US and British Virgin Islands aboard a twin-engine seaplane.  We also took the Paradise Point Tramway to one of the best lookout points on the island, some 700 feet above sea-level.

Of course, no visit to the Virgin Islands would be complete without sampling the local Painkiller, a powerful blend of rum, pineapple juice, cream of coconut and orange juice, well shaken and served over the rocks with fresh nutmeg grated on top. I was desperate to try one, but my wife wanted to take advantage of the duty-free shopping in Charlotte Amalie. Luckily, we spotted a great deal being offered by a local watering hole called the Rum Island Pub.  Hanging just outside the pub was a sign that said: “Husband Day Care. Leave him with us while you shop. You pay only for his drinks!”

Featured image – coastline near the entrance to San Juan Bay