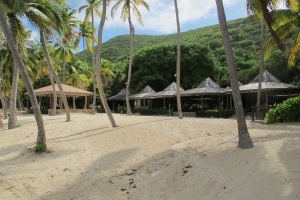 Once home to pirates and buccaneers, the gorgeous British Virgin Islands now appeal to a decidedly different and more upscale crowd, including Sir Richard Branson.

Located some 90 miles east of Puerto Rico, the 50 or so Caribbean islands, islets and cays that make up the British Virgin Islands (BVI) are so pristine and unspoiled that they are often referred to as “Nature’s Little Secrets.” In fact, the region is blessed with so many green hills, turquoise-hued bays and palm-fringed beaches that it’s rated one of the most beautiful and relaxing destinations in the world.

Christopher Columbus was the first European to discover this idyllic archipelago during his second voyage of discovery in 1493. The intrepid explorer was so impressed by the dozens of lush islands he saw on the horizon of the Caribbean that he named them “Las Once Mil Las Virgines” after the legendary St. Ursula and her 11,000 virgins.

Despite their appeal, Europeans didn’t settle the Virgin Islands until the Dutch arrived on Tortola in the mid -17th century and built a stone fort on the shores of Road Town Harbour. The British annexed the archipelago in 1672 and eventually made it a protected territory, which it remains to this day.

Over the centuries, the sheltered bays, gentle trade winds and strategic location next to the Spanish trade routes made the Virgin Islands an ideal base for pirates and privateers. In fact, the islands’ main channel is named for English privateer Sir Francis Drake who sailed through the area in 1595 and mustered a fleet there to attack the Spanish. And the infamous pirate Blackbeard is believed to have buried his treasure in the caves of Norman Island – a legend that may have inspired Robert Louis Stevenson to write “Treasure Island”. 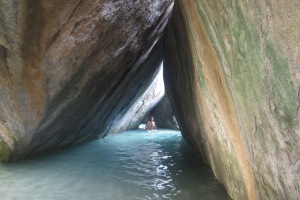 Today, there are several ways to explore the Virgin Islands including by cruise ship. However, while many ships call at the neighbouring island of St. Thomas in the U.S. Virgin Islands, only a handful stop in the BVI – usually at Tortola’s Road Town Harbour.

It’s a shame because while St. Thomas has great American-style shopping in the bustling duty-free port of Charlotte Amalie, the BVI offers a more relaxed and natural environment with a twist of British influence. The British islands also have some of the best beaches, diving, and open-air bars and restaurants in the Caribbean, including the legendary Foxy’s in Great Harbour, the Soggy Dollar Bar in White Bay, and The Last Resort in Trellis Bay.

The BVI is also one of the favourite haunts for British jetsetters, including Sir Richard Branson. The legendary business tycoon has a compound on the privately owned Necker Island, just north of Virgin Gorda. Mr. Branson is sometimes seen hanging out at local restaurants and bars, including Cow Wreck Beach Bar on Anegada, the Cooper Island Beach Bar, and CocoMaya and Hog Heaven on Virgin Gorda – the latter perched high up on a hill overlooking all of North Sound.

If you’re lucky enough to be on a ship that calls in the BVI, your choices for shore excursions will likely revolve around beaches, snorkeling, diving and sailing. Cane Garden Bay on the north shore of Tortola is the top choice for a day at the beach, while the Wreck of the Rhone off the coast of Salt Island is the best bet for diving. There are also some good snorkeling locations including the Indians near Pelican Island, the Caves at Norman Island, the Baths on Virgin Gorda, and Green Cay near Little Jost Van Dyke.

Since a single day in Tortola usually isn’t enough to fully appreciate the beauty of these magical islands, it’s worth considering a pre- or post-cruise land stay, especially if you’re sailing out of nearby St. Thomas or San Juan. There are a variety of charming hotels in the BVI to choose from, including the Sugar Mill on Tortola’s Carrot Bay (rated one of the top 5 hotels in the Caribbean by Conde Nast Traveler magazine), Peter Island Resort and Spa on Peter Island (a private island with four beautiful beaches including Deadman’s Bay, considered one of the most beautiful in the Caribbean), Oil Nut Bay (a swanky  private enclave that features gorgeous villas with plunge pools that hang over the edge of a cliff), and the Bitter End Yacht Club in North Sound, Virgin Gorda (which offers a great sailing and diving program).

My wife Gail at the Peter Island beach bar

Of course, the best way to explore the BVI is by water, and there are a number of small ships that offer inter-island cruises of the region including some from Seabourn, SeaDream, Star Clipper and Windstar. These ships are small enough to anchor in some of the beautiful bays on Jost Van Dyke, Norman Island, and Virgin Gorda that large ships never get to visit.

If you have some boating experience or are prepared to hire a local skipper, there’s also the option of chartering your own sail or power boat from one of the many charter companies in Tortola (more on this in a future blog).

However, no matter how you get there or how or how long you stay, the British Virgin Islands are bound to make a lasting impression. After all, what else would you expect from a group of Caribbean islands beautiful enough to be called “Nature’s Little Secrets?”