Rock and roll research takes me to Doncaster in Yorkshire and a chance to look around a place I’ve never thought of visiting before.

For over 30 years British author Jilly Cooper has amused readers with the outrageous antics of the rich and famous in the equine world. I’ve just finished reading the latest volume, coyly entitled Mount!, which chronicles the latest horse racing adventures of the absurdly charming serial lover Rupert Campbell-Black, his adoring and ever forgiving wife Taggie and a legion of other over-the-top characters. To say it was a fun read would be to do the book an injustice, but it did help that I’d read all the others in the series dating back to Riders in 1985, and knew the cast well.

Because I read the book while in England on a research trip, combined with some family fun, ensconced in our little second home in southern Yorkshire, I was delighted that the nearby racecourse at Doncaster was featured. The town is only 20 miles away, so off I go one foggy morning.

The racing season continues right through the winter, switching from flat to courses with jumps, but unfortunately my visit and the racing calendar didn’t coincide so I was unable to catch a day’s excitement at the track. Doncaster is home to the famous St. Leger race, run in September, and established in 1776, the last leg in the Triple Crown and the Derby. The race course is unusual in that it’s dramatic track runs through a pastoral landscape while still managing to be in the centre of town.

I’m in Doncaster to catch up with Canadian heavy metal band Anvil, touring UK for the first time in years, and whom I’m hoping to work with on a television show. 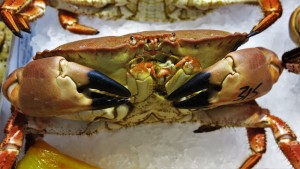 Their show is scheduled mid-week, which isn’t great for the punters, the vast tour bus turns up late and Lips, Rob and Chris, respectively lead vocals and guitar, drums and bass, look tired. Turns out their Luxemburgian bus driver got the vehicle stuck on a hill, with the rear wheels in the air, and after hours of trying to extricate it, a tow truck was finally called. Fifty pounds for five minutes work solved the problem, but the lads are having trouble sleeping in the bunks en route to the next gig.

The audience, almost entirely middle aged and male, is smallish but enthusiastic. After a couple of warm up acts, Lips launches Anvil’s set with a lengthy solo down in the mosh pit. He and bassist Chris soon get the crowd warmed up and put in the most relaxed and fun performances I’ve seen from them. Rob ends their set with a drum solo that would have put Buddy Rich to shame, and the calls for encores are enthusiastic. 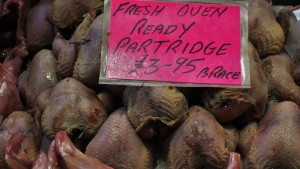 Long after midnight I putter back to base in the mighty Corsa.

With a couple of days to spare around the town, before they arrived, I have to find other things to amuse myself.

First stop, because of my continuing interest in food markets, is the Doncaster version, in the centre of town, which on any given day features up to 10 different sections. There’s been a market here for over 800 years, and probably since Roman times, but with an official charter continuously since 1248. The historic buildings look Victorian, but its hard to tell as they are completely hidden by scaffolding for renovations. Inside the restoration seems complete and under the gaudy painted cast iron support of the vaulted glass roof, various vendors have set up shop.

I visit on a brilliant October Tuesday, when I can pick up fresh fruit and veggies and even out-of-season British strawberries. Indoors, there are permanent stalls. Three days a week 15 fish mongers open shop, with the freshest selection of fish and seafood I’ve every seen. Crabs, I am assured, have come this very morning from Grimsby, a huge fishing port an hour away on the coast. They’re still smiling. I’m torn between seafood and a wide variety of fresh fish. A few alleyways over, the Food Hall has a multitude of butchers, bakers and more.

The next day I’m attracted back by the promise of the Wednesday antique market, but its just bric-a-brac and plastic junk. Barely an antique to be seen, although I have fun sorting through baskets of old brass 12-sided 3d pieces, known as “thrup’ny bits,” looking for one with my birth year on it.

Twice a month there’s a genuine farmers’ market, but I shall have to miss that. 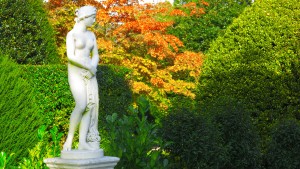 The first of many marble statues

Shortly after the Norman Conquest, one Nigel Fossard refortified the town and constructed Conisbrough Castle. I’m delighted to find my first name dates back to 1066 and all that, but I’ll give the castle a miss on this trip as its nothing more than a ruin and an empty restored keep. Although the view from the top is legendary, the fog precludes seeing very much and besides, I find empty castles boring. I expect if I were driving past it I might pop in, but it’s not on my route today.

However, another attraction seems more promising. At the old Ashworth Barracks, a group of dedicated volunteers have amassed a treasure trove devoted to the brave soldiers who have been awarded the Victoria Cross (for Valour). Outside, a number of old military vehicles stand around. Unfortunately, I missed one important piece of information on their website. The place is closed on Wednesdays. So I shall have to forgo the pleasure of learning about the work of the Victoria Cross Trust, which owns the museum, and see their growing collection of mementos of the very brave.

Undaunted, I plug the address of Brodsworth Hall into my sat nav (that’s what they call GPS in UK) and less than 20 minutes later, I’m pulling up the long driveway and parking near a modern information centre. On the way in, across fields growing some sort of leafy green crop, I caught a glimpse of this grand country house, but up close, it’s invisible and surrounded by dense shrubbery. A pleasant walk up a curving drive leads me through well kept greenery, some of it turning a spectacular autumn gold, until the house appears. In front a very large specimen cedar of Lebanon rises majestically. Along one side of the driveway, marble statues abound. I discover their curious history later.

I’ve been warned, when I buy my ticket, that the place is undergoing restoration, so it’s no surprise to see some of the ground floor windows boarded up. It turns out the Victorian who built the place installed full size plate glass windows – all the rage then; none of your fussy little panes of glass for him. To protect the glass, complicated wooden roller blinds fold down from above and cover them from view at night. An army of strong footmen would have been needed to do the rounds, I’m sure. Like all things mechanical, most of the blinds don’t work and are stuck in position. I’m told that eventually one of them will be restored to working order and the others will be cranked up and left open.

View from the loo

Even more disappointing, is the view inside the main entrance hall, completely closed off by wooden hoardings to protect the faux marble (technically, I am told, scagliola a complicated technique using plaster, marble dust, pigments and wax polish). However, there’s a knowledgeable docent in every room ready to entertain me with stories of the house and inhabitants (and to stop me taking photographs).

This is better than Downton Abbey, because real Victorians and their descendants lived here until about 20 years ago. The hall was built between 1861 and 1863 for Charles Sabine Thellusson. The family lived in the main country house. The staff had their own, less impressive, wing. The female staff slept in spacious rooms above the kitchens and the male staff in rooms on the ground floor. No drafty attics or gloomy basements here. The family were wealthy, but just merchants, so the house is a true reflection of the age and not the result of accumulated centuries of wealth and status.

Most of the original furnishings remain, which gives the place an authentic feel, but the carpets and curtains have gone, destroyed by generations of un-housebroken pets. Brodsworth had fallen into disrepair by 1990 when English Heritage took over. Since then its fragile interiors have been conserved, while the gardens have been returned to their earlier formality. On the day of my visit, two young lady conservators are removing all the books from the library, dusting them one by one, and checking for critters between the pages. A menagerie of stuffed birds and woodland creatures are piled in their workroom, awaiting conservation.

The stained wallpaper in some of the rooms shows the ravages of time, and the foolishness of an architect who thought a flat roof was a good idea in Yorkshire. A bell was rung on snowy days, when outside staff were summonsed to help footmen clear off the excess, but over the decades many leaks sprung up. The first huge task for English Heritage was to repair the roof and now that has been done, other work can start.

The furnishings and art illustrate vividly how one family set up a new country house. There are heirlooms from the families of both Thellusson and his wife, Georgiana. They include 18th- and 19th-century family portraits, Dutch old masters, paintings of horses, books, and mahogany and gilt furniture. The Thellussons also purchased carpets, curtains and furniture from Lapworth Brothers of London. The contemporary Italian marble sculptures, which I first spotted beside the driveway and are scattered throughout the main floor, were purchased as a job lot from an exhibition in Ireland. The survival of many of these items and others accumulated over the years was a major reason why English Heritage saved the property in 1990.

Brodsworth’s large pleasure gardens were built at the same time as the hall, with work continuing on them until the end of the decade. The gardens are Italianate like the house and I enjoyed a late afternoon walk around the perimeter. A billiard-table-smooth lawn beside the house is set for croquet. More white marble statues stand out against the frame of green architecture of evergreen hedges and shrub borders.

Further from the house a succession of different areas open out. Brightly planted flowerbeds are laid out around a three-tier fountain, contrasting with the predominant greens of the magnificent topiary and trees. I climb up through the rockwork grotto planted with ferns to a rose pergola, and look down on a quarry garden laced with intertwining paths.

Soon it’s time to go and join the world of heavy metal — an uber-loud contrast to the peace of Brodsworth. 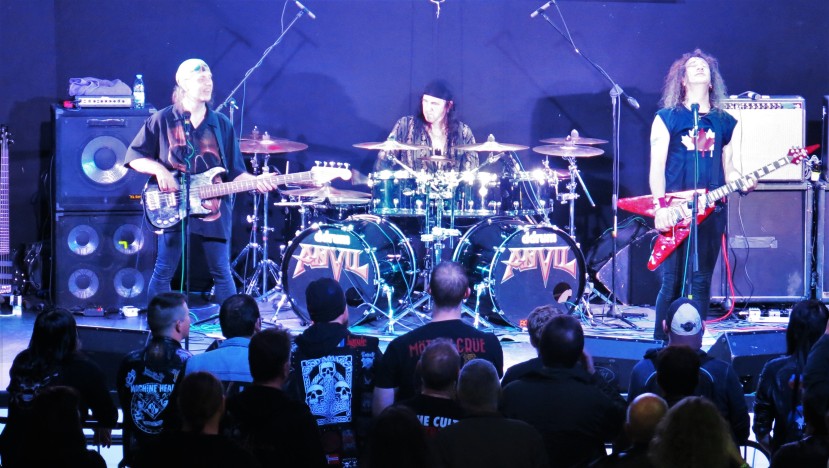