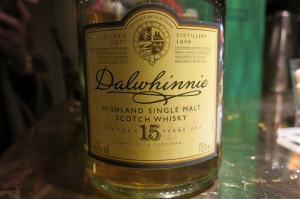 Looking at the display of Scotch whiskies in a bar in Sheffield on a recent visit to England, I realize there’s a fine selection of single malts I’ve much enjoyed in the past. I vow to sample as many of them as I can.

My host is a splendid chap, on his way to becoming a successful real estate developer, and since the local village pub has sadly closed he takes me by the little two carriage train to dinner in the nearest town. Coincidentally, it’s Halloween and the weird folk have come out of the woodwork. Strangely costumed couples are drinking beer on the train, which the lady conductor ignores. After a short commute, we arrive in Sheffield and walk up a steep pedestrian hill to our destination at a restaurant reputed for its cuisine. We step around crowds of already quite inebriated young people in dazzlingly revealing costumes. By the time we get to Browns, we need a stiff drink, and we plan to have a few. He enjoys whisky as much as I do, but he starts the ball rolling by sampling an Irish whisky. With his taste buds thus ruined, I shan’t ask for his opinion in deciding which of my old Scotch friends are the best.

I decide to start with something really good and well-loved. 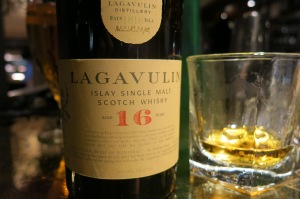 This well-aged single malt from southern Islay has the intense peat smoke you’d expect, with the added novelty of seaweed, as the distillery is literally on the ocean’s edge. It’s a bit intense, but with an ice cube to soften the taste it’s a great start to the evening. Now the bar is beginning to hum with activity and as we wait for our table for dinner, I’m ready to try something a bit younger.

Coincidentally, the bottle next to the Lagavulin along the bar is a fine Dalwhinnie, a wonderful highland malt, and I think, why not? So I have a tot of this very dry, aromatic whisky. By now the bartender realizes I’d like a single ice cube in my glass and adds it without comment. At first it tastes a bit sweet but it lingers with an intense finish where the smoky peat comes through. 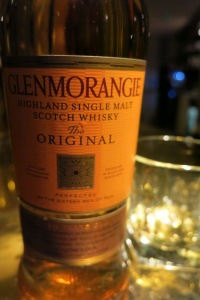 For my third taste, I’m going younger still, but the elegant, floral Glenmorangie suits the moment. It is matured in American white oak casks used for maturing bourbon, which creates a mellow creamy single malt that I vey much enjoy. By now we have been called for dinner and my companion opts for something more suitable for drinking with food. But I’m sticking with Scotch and spot another newly discovered favourite on the bar. 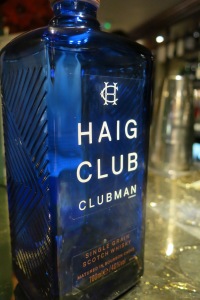 The first Scotch I ever tasted was my Dad’s Haig & Haig, long since vanished from the whisky landscape. But here it is back a re-launch from a distillery in Cameronbridge in a different form with the backing of footballer David Beckham. It’s neither a single malt or a blend, but something completely different – single grain whisky, which is whisky produced in one location from unmalted cereal grain. It has a light gold colour, a sweet taste and a creamy texture, which goes well with my dinner. In the Scotch Bucket at home, I have a bottle of the Haig Club, which comes in a handsome square blue bottle with a glass stopper, so this is a keeper. This is another whisky matured in ex-bourbon casks, which impart butterscotch and toffee flavours. The revived name dates back to the 1920s when Haig was advertised as “The Clubman’s Whisky,” which I’m sure my paternal grandfather would have found familiar.

Having slipped away to the loo, I returned to the table to find my host in a rush to leave as we were about to miss the last train home. Not only that, but he’d picked up the entire tab for the evening and refused to allow me to share. We almost run to the station, and thank goodness it is downhill all the way, and we make the train with moments to spare. The carriages are jam packed with drunken revelers and the ticket collector wisely hides at the back of the train and ignores all the freeloaders, knowing what lager louts the Brits breed today. We make it back to our station safely, and while waiting for a taxi stop in to the nearby pub, named with unremitting logic, The Station. It’s not really my sort of place, with very, very loud disco music blaring, but they do have another interesting Scotch behind the bar. 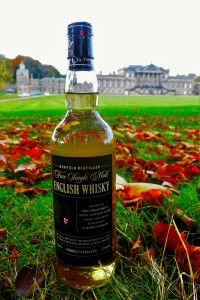 Who knew the English were making whisky? But I’ve tried it before and I need something light and fresh to end the evening. Its quite smooth for a youngish whisky and has a peppery tingle on the tongue, but with a clean, dry finish. The next day, I find a bottle at the store and drop it off for my kind host as compensation for his hospitality. He says he’ll keep it for my next visit to his house, which I eagerly anticipate.

En route to his place of work, I make a brief visit to England’s largest country house, only recently opened to the public. As the bottle of whisky is sitting in the boot, I use the opportunity to take its picture before the enormous 616 foot frontage of Wentworth Woodhouse.

Later in my month-long visit to England, I’m joining all the wonderful folk at the Waterloo Bonfire Society to participate in their November 5 Bonfire Night. 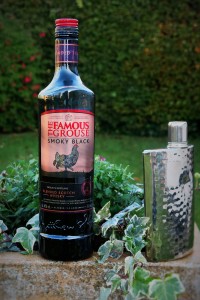 photographed in my Yorkshire garden

Although I’m not usually keen on very smoky, peaty whiskies, I’ve recently come across The Famous Grouse Smoky Black (previously The Black Grouse). As the evening of flaming torches, bonfires and massive fireworks displays will certainly be smoky, it seems a likely candidate to fill my essential hip flask. I quite often prefer a whisky blend, which can offer a more complex taste than a single malt, and the Smoky Black is no exception. It blends heavily peated malt whiskies, including a rare version of Glenturret, with grain whiskies.  The Glenturret distillery is nestled at the foothills of the Highlands near Crieff, Perthshire, and is another must-do on my bucket list. As the evening wears on, and the smoke from fireworks, torches and bonfires make my eyes water, the whisky’s smooth long finish, smoky and aromatic, seems perfect.

Back home, I sample with a whisky loving friend a rare find from the Duty Free shop at the airport. 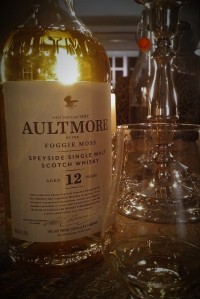 photographed at my Annex, Toronto, dining table by candle light

If you don’t recognize this interesting Speyside, its because almost the entire 2.1 million litre output from the distillery goes into various Dewar’s blends. In 2014, the single malt was launched as part of the Last Great Malts collection, and I was lucky enough to be invited to a tasting evening, where I much enjoyed the 21 year old version (hint, hint). It’s a refreshing single malt, improved by a drop or two of filtered water, with lots of vanilla and honey in the taste, perfect for our after dinner digestif.

The Scotch Bucket was getting dangerously empty, but has now filled up with a few more opened bottles, and as they get sampled in the coming weeks, I’ll be sure to share my thoughts in future. Until then, as Jim Walker says: “Cheers!”

NOTE: This is the fifth anniversary of starting Gentleman’s Portion, which began with a story called Don’t Kick The Scotch Bucket. Many thanks to the thousands of wonderful and interesting folks who have read and enjoyed my blogs, along with those of colleagues David Moorcroft and Jim Walker.