THE NEVER ENDING BATTLE OF THE BULGE 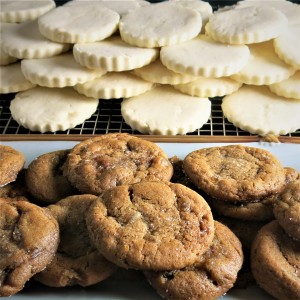 Tonight I’m baking a big batch of cookies, but none of them are for me. It’s the diet season. Again.

The cookies are part of my contribution to Toronto’s amazing Out of the Cold program, where I have volunteered for several years. A group of us cook breakfast for up to three dozen homeless people once a month during the winter and the cookies will go in the lunch bags we give them when they leave. They get a good dinner the night before, showers and a clean and warm place to sleep and then we make them a substantial breakfast. By seven our team has whipped up bacon, sausages, eggs and potatoes. Apart from the cookies, this week my responsibilities are the bacon and bangers, which I have mostly cooked the night before. The real trick, since I am supposed to be watching what I eat, is not to eat any of the cookies or the bacon or the sausages or the potatoes. I’ll try.

The holiday season has just passed, when all caution is thrown to the winds. Then there’s the Snowbird season, when those who can head to the warmth of the Caribbean, or Mexico, or even further afield, and never think twice of the pounds they are packing on. So where better to talk about dieting than here and now?

For a while I was a Toronto Sun columnist, with a series called ‘Getting in shape the easy way.’ Writing in my 30s, I admitted that for the past decade, when I wasn’t sitting around and working, I was sitting around and relaxing. I quoted Lloyd Percival, long since gone but then the super-fit founder of The Fitness Institute , who called the years between 20 and 30 the “dangerous decade.” You’ve left school, stopped playing organized sports, got chained to a desk. Though plenty of damage has been done, it’s not too late to start on the road to recovery. I tried, I really tried, and I did get back in shape enough that I dared post a swimsuit picture in the final column. I started out at 172 lb with a waist measurement of 38 inches and at the weigh-in at the Sun offices I weighed 160 lb. The shy and embarrassed young lady from the newsroom, volunteered by the photographer to measure my waist, read off 33 inches.

Today I dream of 172 lb and 38 inches. Here we go again, I thought, but in fact after only a few days of not very serious work, I’m down a pound or two and back into 38 inch trousers.

Rick Gallop is past president of the Heart and Stroke Foundation of Ontario and his wife, Ruth Gallop, is Professor Emeritus in the Faculty of Nursing and Department of Psychiatry at the University of Toronto, so they clearly know a thing or two about health. Their book The GI Diet was published in 2002 by Random House, and quickly became a best seller. It is now in its 10th edition. GI stands for glycemic index, or the rate which your body digests food and turns it into sugar. Understanding that is to understand how what you eat turns to extra body weight.

As far as I can tell, his principles have been lifted almost intact by one of the storefront diet chains, with the exception that his diet does not include any pills.

You’ll want to read the book yourself if you are serious, but the concept is easy to grasp. Rick divides food into three categories and marks them red, amber and green, just like a stop light. In the weight loss period only green light foods can be eaten. Then, to maintain your weight you eat mainly green light foods, but can also venture into amber or red light territory occasionally.

Also, he talks about the need to spread your proteins, carbs and  fats equally through the day, with three small meals better than skipping breakfast, or eating a giant dinner to make up the hunger gap.

Like the folks at the diet chain he also has us staying away from the Five Ws – white flour, white rice, white sugar, white salt and white potatoes – no more of those ever! There are plenty of healthy alternatives

Other similarities include keeping a diary or log of absolutely everything you eat or drink, and trust me, that works too, helping you understand where you are doing well and where you are slipping.

One thing I learned about from the diet chain is CLA, conjugated linoleic acid, taken in the form of several capsules a day. There’s tons of material on the web and nothing very concrete by way of proven results, but it seems to work for me in reducing tummy fat. Advocates of CLA claim that the nutrient helps to reduce body fat, increase lean muscle mass, and lose weight. Some claim that CLA helps you transform your muffin top into a six-pack by increasing your fat-burning capabilities. Actually, no one knows exactly how CLA works. However, from what I can gather, researchers do say it appears to decrease the amount of fat stored after eating, increase the rate of fat breakdown in fat cells, and decrease the total number of fat cells. There don’t seem to be any bad side effects so it might be worth a try for two or three months. Key with CLA, however, is to drink plenty of water (at least six glasses a day) and take some light exercise. Perhaps it’s just the water and the exercise that’s doing the trick, and the CLA is a placebo effect.

Last night I had pasta for dinner. I’ll start the diet again today. No really, I promise.

PS: I liked this quote from the January 2017 political scene — “I can make you one promise: I will not be taking my shirt off as often as Justin Trudeau does. He may have a yoga body, I’ve got a dad body,” said Andrew Scheer, Tory leadership candidate and former Speaker of the Canadian House of Commons.

PPS: The cookies were made from dough gifted by the talented real estate agent Gillian Oxley at Royal LePage and donated to the Out of the Cold program at St Aidan’s Church in The Beach, Toronto. The berries were photographed at The St. Lawrence Market.