Surrounded by palm-fringed beaches, turquoise waters and gorgeous coves, it’s easy to see why this idyllic chain of islands appeals to mariners looking for a fun and memorable experience.

After arriving on the Caribbean island of Tortola, our group of five intrepid sailors made their way to the Fort Burt Hotel on the edge of picturesque Road Town Harbour.

The capital of this tiny chain of islands some 90 miles east of Puerto Rico, Road Town, is the main port of entry to the British Virgin Islands. It’s also the largest city on Tortola, an island filled with beautiful bays, palm-fringed beaches and a lush mountain range that reaches its zenith some 1,700 feet above sea level at Mt. Sage.

Luckily, we could see the mountains, the city and the harbour from the dining room of our hotel, which is built atop a hill on the ruins of a 17th-century Dutch Fort.  It’s also conveniently located near a number of charter boat companies on Tortola, where we picked up a 43-ft sail boat called Away (which we nicknamed Hooligan’s Island) the next day.

It had rained most of the morning, but as we boarded our boat and headed south towards Norman Island some 11 km across Sir Francis Drake Channel, the bright Caribbean sun began to break through a retreating canopy of cloud in time for our arrival.

Known locally as “Treasure Island” after the booty pirates supposedly buried ashore and the Robert Louis Stevenson novel it inspired, Norman Island sits at the southern end of an archipelago which many believe is one of the most beautiful regions in the world. With gentle trade winds, an abundance of good anchorages, short distances between lush islands, and pristine waters, it’s also a sailor’s paradise.

Once at Norman Island, we moored in a pretty bay called The Bight, and put on our pirate crew shirts which bore the slogan “The beatings will continue until morale improves.” We then motored ashore in our dinghy where we discovered a beautiful sandy beach and a wonderful open-air bar known as Pirates’ Bight. After consuming copious amount of painkillers (dark rum, coconut cream, pineapple and orange juice) at the bar, walking on the beach, and playing Frisbee in the water, we returned to our boat for a delicious home-cooked supper of Spaghetti Bolognese.

By now it was 10:00 pm, so we decided to top off the evening with drinks and dancing aboard the William Thornton (aka Willie T’s), a floating bar that is permanently moored in the harbour.  The bar is notorious for wild behavior, which includes dirty dancing, jumping naked off the side of the ship, and being drunk enough to abscond with someone else’s dinghy – as we discovered when ours went missing at midnight. Fortunately, the guilty party returned it the next morning.

The Bight is also next door to a pair of great snorkeling spots – The Caves and The Indians – where there’s plenty of brightly coloured fish, coral reefs and occasionally sea turtles.

After visiting The Caves, we sailed over to nearby Peter Island where we dropped our hook in Great Harbour for a brief lunch stop.

The island is famous for its exclusive 1,800 acre retreat known as the Peter Island Resort, which features five palm-fringed beaches (including one on beautiful Deadman’s Bay), a yacht marina in Sprat Bay with 15 slips and four mooring balls, an award-winning spa, and two great restaurants (including one right on the beach).

After visiting the resort, we sailed up Sir Francis Drake Channel to Manchioneel Bay on Cooper Island.  With winds running out of the northeast at between 15 to 20 knots, it was great sailing with our lee rail in the water and sea spray splashing up on the foredeck.

Cooper Island is home to a small eco-resort that has 10 beach-front cottages nestled amongst the palm trees. It also has a great rum bar and restaurant that is popular with sailors who like to overnight in the bay and enjoy some good grub and cocktails ashore. The hotel operates 30 moorings in the bay suitable for vessels up to 60 feet in length, but they disappear quickly – usually by 3:00 pm – and anchoring in the seagrass and mooring field is not permitted. In fact, we nabbed the last mooring ball just minutes before another half dozen boats arrived only to find they were out of luck.

Our entire crew went ashore for dinner, which included a starter of Confit Pork Belly & Scallops, followed by seared Mahi Mahi fillet – all washed down with a sailor’s portion of rum and wine.

It rained most of the night, and by the next morning the winds were gusting up to 25 knots. So we put a double reef in our sail and laid in a northeasterly course for North Sound at the top of Virgin Gorda some 20 km away.

The second largest of the territory’s four main islands (the others being Tortola, Jost Van Dyke and Anegada), Virgin Gorda got its name from Columbus who thought the long island with a mountainous middle looked like a “fat virgin.” Today, the island is famous for its turquoise-hued bays, high-end resorts and sheltered waters which attract boaters from around the world. 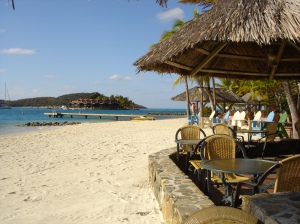 Once in the tranquil waters of North Sound, we tied up to a mooring buoy and made our way ashore for a barbecue dinner under the stars at the Bitter End Yacht Club. After feasting on grilled fish, steak, chicken and ribs with friends from a catamaran called Annie’s Toy that we had met back on Norman Island, we made our way to the Bitter End Pub for cigars, rum, and some pool and darts with the locals.

Located on the side of a hill overlooking a mile of waterfront on the northeast end of Virgin Gorda, the Bitter End is accessible only by water and is the last island outpost before the open waters of the Atlantic Ocean. Its protected sound is perfect for water sports, and the area boasts a number of pretty beaches, great fishing sites, and several coral reefs which are good for snorkeling.

(Click here to read part two of my report on sailing through the British Virgin Islands.)