“Days I can’t forget and nights I can’t remember!” – Inscription on a T-shirt describing what sailors can expect in the BVI.

(This is the second of a two-part story on sailing the British Virgin Islands. Click here to read part one.)

We reluctantly left North Sound the next morning for an 18 km-sail in light winds along the stunning coast of Virgin Gorda and across Drake’s channel to popular Trellis Bay at Beef Island. Once moored, some of our crew (my daughter Samantha, her boyfriend, and my nephew Adam) took the ferry over to Marina Cay to catch the singing pirate show, while good friend Brian and I dinghied over to De Loose Mongoose for sunset cocktails on the pretty beach that surrounds most of Trellis Bay. 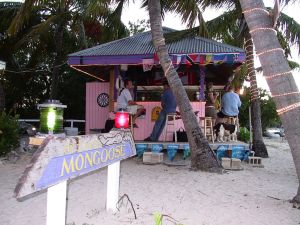 After cocktails, we picked up our crew at the ferry dock and dinghied over to The Last Resort Restaurant on nearby Bellamy Cay for dinner and entertainment. Founded by English entrepreneur and entertainer Tony Snell in 1972, The Last Resort has taken on legendary status over the decades as the place for good food and fun. And over the years that fun has included singing dogs, a braying donkey, and Tony performing a variety of his own hilarious songs about sailors.

When Tony retired, he gave the place to his daughter Jessica and her husband Ben Branford to run. However, when in town Tony still makes the occasional appearance on stage before the zany Al Broderick takes over with his interactive show and tequila shooters. We were lucky enough to see both, and to get two of our crew on stage to share shooters with Al! Unfortunately, the Snell family recently sold the Last Resort and instead of Al Broderick, the place now plays loud disco-style music, serves bad food and is losing business to beach bars on Trellis Bay. 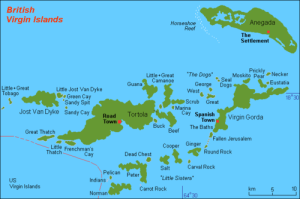 Map of the BVI

The next morning we motored through Little Camanoe Passage on our way to Guana Island where we stopped at Monkey Point for some snorkeling. Then we sailed west for 19 km along the north side of Tortola on our way to Great Harbour on the shores of Jost Van Dyke.

The smallest of the BVI’s four main islands, some believe Jost Van Dyke was named for the 17th century Dutch pirate Joost Van Dyk who once used its harbours as a hideout. But whatever its provenance, this laid-back island of just a few hundred residents features spectacular beaches, beautiful bays, and some of the most entertaining beach bars in the Caribbean. And for that very reason, we had planned our itinerary so that we would be anchored here on May 6 to celebrate Samantha’s birthday. 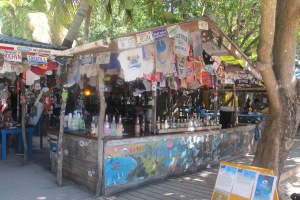 Surrounded by white sandy beaches, lush green hills, and dozens of beautiful yachts, we began our celebrations with drinks in the boat’s cockpit where Sam opened her gifts, including a teal-coloured baseball cap with the inscription “Women who behave rarely make history.” The cocktails, beer and shooters continued until sundown, at which point all of us stumbled into our dinghy for the trip ashore for dinner at Foxy’s Tamarind Bar. All, of course, except Adam (aka Hooligan) who tumbled into the bay after attempting to leap into the dinghy head first.

After dragging Adam from the water, we motored ashore to Foxy’s where we met our good friends who had shared dinner with us at the Bitter End. They had agreed to join us for Sam’s birthday, which was now beginning to look and sound more like a rowdy island festival than a small gathering of friends.  Oh, and I haven’t even mentioned the song yet.

Samantha celebrating at Foxy’s with Robert

Sometime between anchoring and dinner, Brian and Adam had created a birthday song for Sam loosely based on a popular Caribbean song called “Hot, Hot, Hot.” And now it seemed we were breaking into song every 5 or 10 minutes, regardless of what was going on around us.  I’d like to say that things calmed down after we finished dinner, but they didn’t. Instead, what followed was more singing, lots of dancing, some falling down, and a dinghy ride back to the boat that resembled a scene from a Marx Brothers’ movie.

Needless to say, the next morning came far too quickly, especially since it had rained heavily during the night and we had forgotten to close the top hatches in the dining room or bring in various items from the outdoor cockpit including Sam’s camera. So with lots of cleaning ahead of us and threatening skies, we decided to motor over to nearby Little Harbour for a quiet afternoon followed by a delightful dinner of Conch Stew and Lobster at Sydney’s Peace and Love Beach Bar.

Brian and Adam at the helm

By the next morning we were fully recovered and the weather had improved, so we made our way over to Cane Garden Bay on the north shore of Tortola, which is arguably one of the most beautiful bays in the Caribbean. After snorkeling on a large reef at the entrance to the harbour, we sailed west along the coast of Tortola to Soper’s Hole, a large and busy anchorage at the end of the island where we were about to meet a surprise guest.

My wife Gail is not a keen sailor, so she had declined to be part of our crew. However, at the last minute she had agreed to join us for the last few days of our trip– something I had kept from everyone.  So when we moored our boat in Soper’s Hole and went ashore to have a late lunch at Pussers Landing, the crew were surprised but delighted to see another potential galley wench sipping cocktails at the bar. 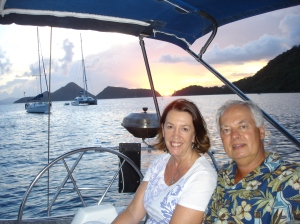 Later that afternoon I passed out awards to the crew for various accomplishments such as most bruises, greatest consumption of beer, and most mosquito bites – a tradition that goes back to my first bareboat sailing adventure 35 years ago with late friends and intrepid sailors Paul Wilson and John Wolbert. The crew returned the favour by presenting me with a T-Shirt bearing the inscription: “The British Virgin Islands. Days I can’t forget and nights I can’t remember!”

That night, we had our farewell dinner of Chicken Roti, fresh fish, ribs and lots of wine at the Jolly Roger Inn (now called the Fish ‘n Lime Inn), which sits right on the water’s edge across from beautiful Frenchman’s Cay. Then we dinghied back to our boat where we sat in the cockpit for hours admiring the bright stars, gentle breeze, and swaying masts in the harbour.

“If there’s a more beautiful place to sail than the BVI, I’ve never discovered it,” I confessed to the crew. They waited for a few seconds, nodded in agreement, and kept on drinking.

Featured image – sunset in the BVI