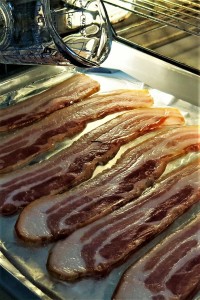 Easy trick! Add 1/4 cup of water to the baking tray

Here’s a really neat trick for making the best crispy bacon with no splatter.

Once a month some other willing volunteers and I gather very early in the morning at a church in The Beach area of Toronto’s east end to make breakfast for a couple of dozen homeless people under the Out of the Cold program. Others in the group handle a full dinner the night before and supervise the sleeping arrangements and other teams fill in the balance of the month. 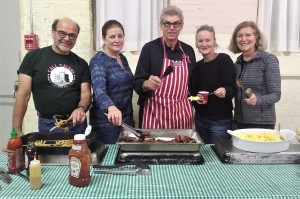 Breakfast gang at Out of the Cold

The Saint Aidan’s Out of the Cold program began in the winter a decade ago, during a record cold spell,  with the simple idea that no one should die in the cold because of the lack of a roof over their head. The church opened its doors for dinner, beds and breakfast once a week between November and April. Additional local people in need of a chance to socialize with others and have a good dinner join the crowd in the evening. Social services are provided by the staff of Dixon Hall, but all the food preparation, cooking, serving and clean up is done by volunteers.

We may wonder at the circumstances that brought these folk to our shelter, but we never pry. Some are on the street by choice, others by circumstances. We treat them as guests and give them a safe, clean and hospitable place to call home once a week.

We don’t try to solve the problems of homelessness, but every contribution helps a little. As Margaret Mead said: “Never doubt that a group of thoughtful, committed people can change the world. Indeed, it is the only thing that ever has.”

Mostly our guests are men, but there are some women who come, and occasionally couples. They are of every age, size and ethnicity.  They have to be fit enough to get to the church at the eastern extremity of Queen Street and make it up and down our many stairs, but recently we had a blind guest who seemed to manage. They’re a resilient bunch and we see many of the same faces week after week and year after year.

One of the most in-demand breakfast items is bacon, and for the past few months I’ve been on the bacon and breakfast sausage detail. Occasionally, I’m the cook in charge of the whole meal, but usually I’m a willing second (or third) banana. Steve wrangles the eggs and hash browns and Tineke makes a fabulous fresh fruit salad. We all share the washing up duties.

Because of the volume, I pre-cook the bacon and sausages the night before and then store them in the fridge and warm them up in the church’s huge gas oven in the morning. This seems to work well. But the trick is to cook the bacon and pork sausages in an oven, with water. 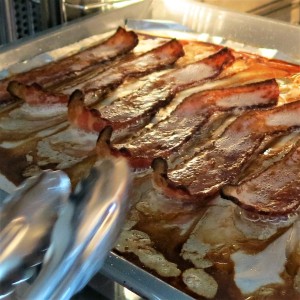 On Out of the Cold days, I use two ovens and four trays and cook enough bacon for two dozen people in 40 minutes, with another 20 minutes for the sausages. All done in an hour, which saves a lot of effort at zero five dark the next morning.

Thanks to my daughter Megan for helping take the bacon photos. For more on bacon, read: IS BACON ETHICAL? 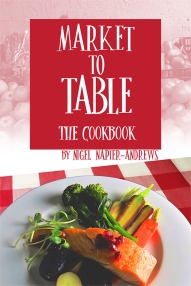 Tagged as: Bacon, Best bacon trick, Out of the Cold, St. Aidan's Church