A TALE OF TWO EFFERVESCENT CITIES 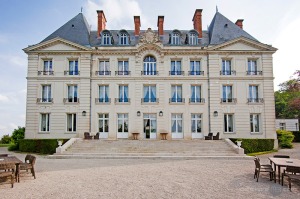 It was indeed the best of times when we found ourselves in the two principal cities of Champagne: Épernay and Reims.

Épernay
It was the spring of 1989 and we were happily ensconced in a delightful, ancient rail coach as we slowly wended our way north-eastward from Paris to Épernay for our first visit to the storied Champagne region of France. Hélène and I were to be the guests (a tale for another time) of the LVMH group at their Möet & Chandon complex. Soon we were pulling into the train station in the middle of town. It was early afternoon as we schlepped our large, black, rolling suitcases off the train, through the station and out to the waiting queue of taxis. After hoisting our luggage into the trunk of the lead cab we hopped in and asked the driver to please take us to Möet & Chandon. He proceeded to ease out onto the broad Avenue de Champagne, turned left and drove for about 300 meters. He then pulled over in front of a massive building on the right. ‘Möet & Chandon’ was prominently displayed on the ornate wrought iron fence. “Voila, here we are,” he announced without a trace of irony in his voice.

We sheepishly paid our fare and entered the grand lobby of France’s largest champagne house, home of the renowned Dom Perignon vintage champagne. Our suitcases were whisked away and we were warmly greeted by our very elegant host, who saw to it that champagne flutes bubbling with a delicious 1er cru brut were soon in our hands. After a tour of the sales and display rooms on the main floor, we descended to the cellar and entered the 28 kilometres of underground tunnels, the oldest of which dates back to the founding of the company in 1743. Tens of millions of bottles of fine bubbly rest in these vast vaults hewn from the chalky soil. We explored this subterranean labyrinth in a purpose-built jitney to the haunting sound the riddlers made as they twisted and increased the tilt of each bottle a fraction. 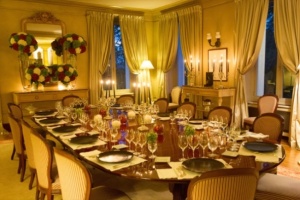 After the tour we were taken by chauffeur-driven limo to Château de Saran, Möet & Chandon’s stately guest house located just a few kilometres outside of Épernay. The estate was acquired by Jean-Rémy Möet, founder Claude Möet’s grandson, in 1801 as a hunting preserve. The château was subsequently constructed in 1846 when the Möets began entertaining in the country, which was the fashion in those days. We were greeted by a delightful English couple who were the estate managers and they showed us to our suite on the second floor. Oh, my! This vast, opulent, yet comfortable chamber with ceilings at least 14 feet high covered more territory than our apartment back in Montreal. Hélène was particularly taken by the Christian Dior toiletries she discovered in the cavernous marble bathroom. It was suggested that we take a stroll around the manicured grounds or take a nap before dinner with members of the extended Möet family and their other guests at 8:30 that evening.

I was delighted to note, as we entered the splendid dining room, already abuzz with lively, joyous conversation, that there were four wine glasses at each place setting. This was a most auspicious sign. We were not disappointed as vintage champagne and grand cru burgundy accompanied each sumptuous course. Later that evening as we lay in our expansive bed and reflected on our privileged day in Épernay, we contentedly sighed to each other, “What a marvellous introduction to champagne.”

Reims
It was morning in the early spring of 2006 and once again we found ourselves on our way to the Champagne region, but this time in a sparkling new, modern train. Our destination was Reims, the city where French kings underwent the ceremony of consecration at the Notre-Dame de Reims cathedral. We had just begun our wine importing adventures and were going to visit one of our first three wineries, Champagne Forget-Brimont the next day. 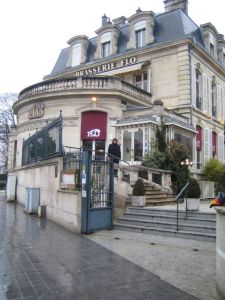 The Brasserie Flo in Reims

We were much savvier this time, having determined exactly where our hotel was located and knowing we could easily walk there with our much smaller suitcases in tow. We couldn’t help but notice the two stately mansions standing like sentries on either side of Place Drolet d’Erlon as we exited the train station. Both had been converted into restaurants, the Brasserie Conti in the Grand Hôtel Continental on the right and the Brasserie Flo on the left. After close examination, we decided that we would grace the latter with our lunchtime patronage although we wished we could have somehow worked in both. The Brasserie Flo was exactly what a fine restaurant in Champagne should look, feel and smell like and thus we made our reservations. We then continued on a few blocks to our hotel, the Best Western Hôtel de la Paix. It was with great trepidation that we had booked a Best Western in France but we needn’t have worried. It had recently been redecorated by Philippe Starck and was absolutely exquisite.

We returned to Brasserie Flo for a brilliant, bubbly lunch and then roamed the streets of Reims in a light drizzle, spending considerable time in the awe-inspiring cathedral. Constructed over several decades in the 13th century, it has been witness to much French history and sadly was extensively damaged during the First World War (but has since been beautifully restored). 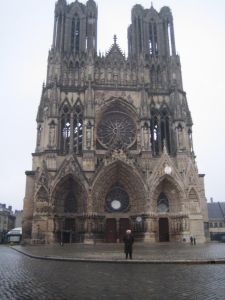 Eva Schubert, our contact at Champagne Forget-Brimont, picked us up bright and early the next morning and drove us about 10 kilometres south (about half way to Épernay) and into the hills to the winery near the small village of Ludes. We were greeted by the affable Michel Forget who is the sixth generation Forget to follow the family’s grape growing and wine-making traditions. Louis Forget created the vineyard at the beginning of the 19th century and descendant Eugène established the family label in 1920 (with a production of only a hundred bottles). In 2000 Michel was joined by Frédéric Jorez who, as general manager, took charge of all of Champagne Forget-Brimont’s operations.

After introductions and other pleasantries, we got down to the part I like best, even at 10 in the morning … the tasting. It was an exhaustive trial of their complete product line (talk about the proverbial kid in the candy store). No question about it, the wines were all terrific. As well they should have been. All the grapes came from premier cru and grand cru (the top and the best of the top) vineyards. Then, Michel Forget personally oversaw absolutely every aspect of the meticulously crafted champagnes. He is definitely an artisanal vigneron. 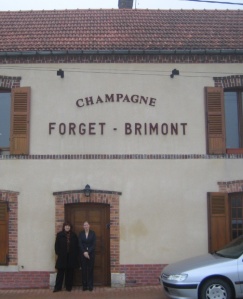 Permit me tell to you about one of them, the non-vintage Premier Cru Extra Brut that we later offered to our wine club at $39.95 the bottle. Here’s how I described it – This is really excellent apéritif champagne in a delicate and refreshing style. Comprised of 60 per cent pinot noir, 20 per cent pinot meunier and 20 per cent chardonnay blended from three vintages, it is a light gold coloured champagne with persistent, dancing bubbles. It has an engaging nose of green apples, hazelnuts and white flowers. In the mouth, the wine is round, full-bodied and well- balanced. There is a hint of pineapple and lingering citrus fruit in the finish which is crisp and nicely dry. What a great wine for champagne fanciers to celebrate victories and assuage defeats.’

After the tasting we followed Michel down to his modest chalk cellars 13 metres underground where tens of thousands of bottles (not tens of millions like at Möet & Chandon) of champagne rested at a constant temperature of 10 degrees centigrade. Michel had dug the first chamber himself by hand many years ago. In contrast, when we were there a modern, massive excavation machine was at work expanding his storage capacity. He showed us in great detail and considerable pride all of the stages that go into making fine champagne. “All this talk about wine is making me hungry,” he said. “Let me take you to lunch.”

And just where do you suppose he took us? To the Brasserie Conti, the other restaurant we wished we could have tried the day before in Reims. It was every bit as delicious as the Restaurant Flo and we had a most marvellous time. One last aside – Michel ordered a bottle of champagne to commence the festivities. But, it wasn’t one of his! “Why didn’t you select a Forget-Brimont champagne?” I inquired. “You see, Jim, the producers of all of the champagne you see on this carte des vins have to pay the restaurant for the privilege of displaying their wines here, in addition to supplying their wine gratis. I have no such marketing budget and that is why I am able to offer my fine champagne at such reasonable prices.” 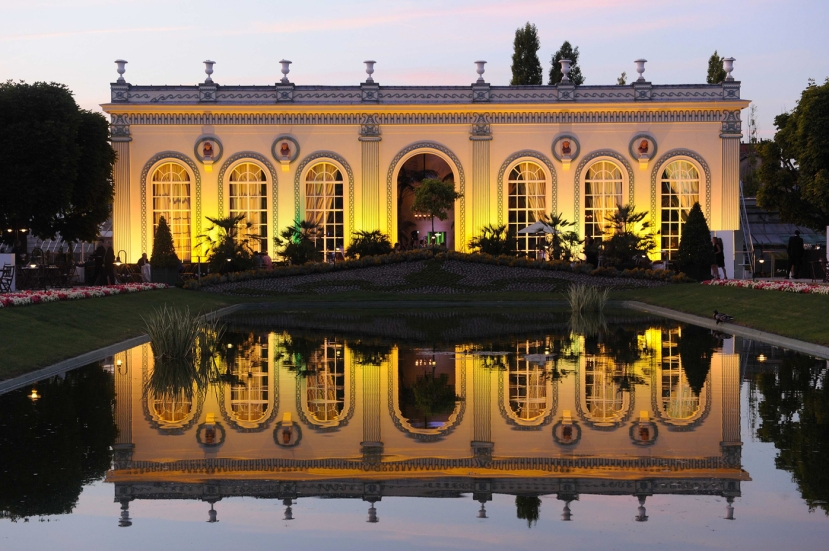