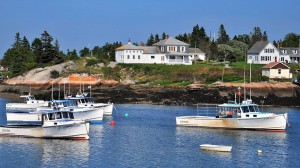 Maine’s charming village on the coast of Mount Desert Island is the perfect place to experience the grandeur of Acadia National Park.

We awoke to glowering skies and steady rain as our cruise ship dropped its hook off the coast of one of North America’s most beautiful seaside towns – Bar Harbor, Maine.

Located on Mount Desert Island, this picturesque village has attracted some of America’s biggest icons and celebrities over the years, including the Rockefellas, Vanderbilts, Astors and Morgans. And a number of Hollywood movies have been filmed in the area, including “The Cider House Rules” with Charlize Theron. 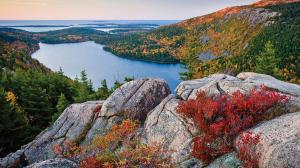 But while Bar Harbor has plenty to offer including whale watching tours, museums, art galleries, and a beautiful waterfront, we had come here to see the magnificent Acadia National Park which surrounds the town. So we boarded a bus in the port and climbed up Cadillac Mountain to the top of the park, which provides a sweeping vista of the forest, coastline and the town of Bar Harbor and Frenchman Bay below. It’s also where we found brilliant yellow, orange and red leaves bursting from the tree tops set against the pretty coastline.

Acadia National Park is a nature lover’s paradise loaded with lots of wildlife including white-tail deer, foxes, coyotes, hares, beavers and over 300 species of birds.  The park features 48,000 acres of land covered with forests, streams, lakes and 17 mountains. Its tallest peak, which stretches 1,530 feet from sea level to the top of Cadillac Mountain, is the highest on the Eastern Seaboard and during certain times of the year is the first place in America to receive sunlight.

Mount Desert Island derived its name from explorer Samuel de Champlain, who in 1604 ran aground on the island he named Isles des Monts Deserts (Island of Barren Mountains). But it wasn’t until the late 1700s that settlers began to arrive, and the island became a community of farmers and fishermen.

Eventually, word of the island’s rustic beauty spread, aided and abetted by the works of landscape painters from the local Hudson River School of Painting. In its heyday in the 19th century, the town of Eden (as Bar Harbor was called until 1918) had become an exclusive summer resort for the wealthy, rivalling that of illustrious Newport, R.I.  They called themselves “rusticators” and built huge mansions and “cottages,” many with ballrooms, croquet lawns and formal gardens. Some were designed by famous architects such as New Yorker Bruce Price, who built the Chateau Frontenac in Quebec City.

While most of the mansions from the gilded era were destroyed in the Great Fire of 1947, a few survived and still grace the town’s leafy streets. However, most have been converted into hotels, B&Bs and restaurants. 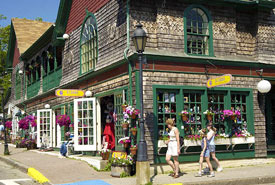 After spending our morning in Acadia National Park, we took refuge from the rain in Bar Harbor’s quaint Ivy Manor Inn on Main Street. The Inn has a charming restaurant where we decided to dry out over a delicious lunch of clam chowder, fresh lobster, and corn on the cob, all washed down with a pint of local beer from the Bar Harbor Brewing Company.

Once lunch was over, we hoisted our umbrellas and made our way down Main Street past a variety of interesting shops including “The Scrimshaw,” which practices the whaler’s art of hand engraving on fossils. We then walked along Bar Harbor’s Historic Corridor, a handful of streets that intersect with Main and contain most of the town’s historic buildings. Along the route we found many buildings from the 19th century including the Congregational Church circa 1889, the Mira Monte Inn built in 1860, and the original Brown’s Furniture store finished in 1888. We also dropped in to the Abbe Museum, which has an interesting exhibit of Native American artifacts from the region.

It was now late-afternoon and time to take our rain-soaked bodies back to our ship for our five o’clock sail away.  As our ship slipped anchor and slowly eased out of the harbor, we were treated to a bird’s-eye view of our last local landmark –  the 1858 Bass Harbor Head Light, one of several beautiful and historic lighthouses that grace the island’s rugged coastline.

The lighthouse soon faded out of view in the twilight of a fall afternoon, but we knew that the majestic beauty of Mount Desert Island would remain with us forever.