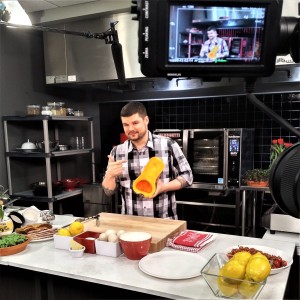 In the first episode of the new season of Market to Table, Chef Dan Frenette shops at The Stop Farmers’ Market at the Artscape Wychwood Barns and creates tasty butternut squash and stracchino gnocchi carbonara in his new kitchen.

The show premiered in spectacular ultra-high-definition television on Monday, June 12, 2017, on Bell Fibe TV1. You can watch it on YouTube anytime.

Dan was a guest chef on the first season of Market to Table and impressed everyone on the show with his easy manner on camera and in the kitchen. When I decided that I would like to concentrate on producing the show and hand the on-camera role over to someone else, Dan was our first choice. Happily he said yes and a second season was developed. The first three episodes with Dan at the helm broadcast over the next three weeks, and will remain on Bell’s video-on-demand channel for a couple of years, so there’s plenty of time to get to know Dan.

The farmers’ market at the Wychwood Barns was one of the best organic markets we’d found in Toronto, that was also open in the winter, when we started taping the series. It’s bright, cheery atmosphere was perfect for a quick visit with a small crew. No lighting was needed with our amazing new 4K cameras, which record images at four times the resolution of HDTV. Imagine how the food looks? Amazing.

Farmer John is proud of his squash

After a couple of shopping trips with Dan, he’d decided what he wanted to cook for the first episode. Our first stop on filming day was to John and Inge Crowther’s table for butternut squash. At Clover Roads Organic Farm they are far from the road and far from social media. We may have to send them a note by horse and buggy to tell them about the show, but they certainly know what they’re doing with their crops. At the time of year of our visit, the squash had been in storage for three months and getting sweeter by the day. John also has ducks on the farm and we buy some huge duck eggs for our recipe.

Next vendor we visit was Wasan Jajou, who handles the Kefir Farms cheese table. Dan wanted Pecorino and Stracchino for his dish and she was able to give us perfect substitutes. Both these Italian cheese names are protected by international law and obviously not available in a market which only features locally grown or made products, but Wasan assured us that her choices would be indistinguishable. She told us that stracchino means lazy, and the milk is supposed to come from cows that have fed higher up the mountain and then ambled back to the barn for milking later in the day, creating a product with a higher fat content than normal. I’ll take my cheese from lazy cows any day, in that case. 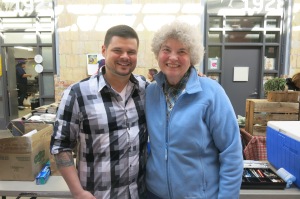 Wendy Elrick of Green Gate Farms was supposed to feature on the first season, but somehow her sound track got distorted and was unusable. Since she had just the meat Dan wanted for his dish, we decided to visit again and this time the sound turned out fine. Wendy offered bacon, both sliced and in chunks, and assured us it was the product of happy pigs. Indeed, the young animals follow Wendy round the farms and are free to roam while growing up. All of us on the crew will attest to the validity of her claim. In the kitchen the bacon was truly amazing.

Finally, we went to see our old friend Liz Foers of Essa Seedlings. Liz kindly agreed to grow all the pots of herbs and edible flowers you can see on our kitchen set, and Dan uses all of them on the series in one episode or another. Fresh micro greens add an indefinable fresh essence to dishes and Dan knows how to make the best use of them. Not too much and not too little. Just right.

Hunting for micro greens with Liz

A few weeks later, as things happen in the TV world, we are in Dan’s new kitchen to set up and tape the first three episodes. Dan has been working with the folks at W.D. College, who wholesale kitchen equipment and gear to the profession, so through their kindness we had access to everything we needed to build a kitchen on-site just for the show. The first decision was whether to cook on a gas range, as we had the first season, or try something new. We settled for a new induction range, where the heat is supplied by magnetism in a very energy efficient manner. All new induction ready pots and pans were also available.

Our oven was a monster, and not something a home cook will likely have. However, it allowed us to prepare food at twice the normal rate. Even still, we had to resort to that old television dodge of  pre-cooking some of the food: “Here’s some I made earlier,” Dan says. Rest assured, on the show and in the recipe below, we give times and temperatures for home kitchen use.

Dan writes: “I would love to shake the hand of the creator of carbonara. It has been my go to pasta dish at restaurants for as long as I can remember. The silkiness and richness of the egg yolk, the crispy and salty bacon, sharpness of the cheese and the al dente pasta are nothing short of perfection in my humble opinion. My palate lights up at the very thought of this drool worthy dish. I couldn’t resist adding gnocchi to the mix to heighten the texture with little butternut squash dumplings. I am actually salivating as I write this and am not sure I can handle it anymore. Nope I’m done, I’m going to make some carbonara right now, I hope you are too.”

If the first episode went well, the second and third got better and better, as you will see over the next few weeks when the series rolls out.