IS MY SHIP TOO BIG? 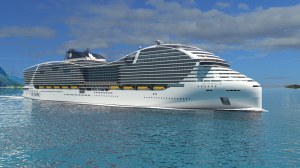 The cruise industry is one of the fastest growing sectors in the mass tourism market, with 24 million passengers sailing in 2016, compared to just 1.4 million in 1980. And a growing number of these passengers are choosing to sail on gigantic mega-ships that can dwarf the local surroundings and turn small islands and historic city centres into a nightmare for local residents.

In April of 2018, the largest passenger ship ever built will leave a shipyard in France to begin its maiden season offering Mediterranean cruises from Barcelona, Spain. The 230,000-ton Symphony of the Seas will carry up to 6,870 passengers, rise 18 decks into the air, have a beam of 47 metres (154 feet), and stretch 362 metres long (1,188 feet) from bow to stern. 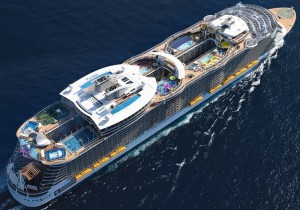 When launched, this colossus will join three other record-breaking “Oasis class” ships currently sailing for Royal Caribbean, providing the cruise line with four ships in excess of 225,000 tons. This class of ship is more than 30% larger than the next largest passenger ship, twice as large as the biggest cruise ships of the late 1990s, and five times bigger than the ill-fated RMS Titanic, which at 46,000 tons was the largest ship afloat at the time of its maiden voyage in April of 1912.

Furthermore, by the end of 2017 the cruise industry will have nearly 25 ships in excess of 139,000 tons, each of which can ferry between 3,000 to 6,870 passengers into a single port of call. And MSC Cruises recently ordered a pair of giant ships for delivery in the next decade that will weigh 220,000 tons and carry 6,850 passengers apiece.

Jamming that many passengers into a small island or historic city centre can tax the local infrastructure in its own right, but imagine the impact when four or five of these mega-ships descend on a single port at the same time. And things can get even worse when all these cruise ship passengers are combined with thousands of other tourists who arrive by plane, train or bus. 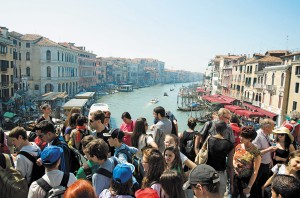 Let’s consider the plight of Venice where mammoth cruise ships tower over the historic city and decamp thousands of passengers onto its narrow streets and bridges on a daily basis from May to September. In 1988 the physical capacity of the historic centre of Venice was 20,000 visitors daily. The average daily flow now is 80,000 – more at the height of summer.

The impact from this many tourists has become so negative that in an unofficial referendum earlier this year, Venetians voted overwhelmingly to ban cruise ships from the historic city centre. While the result had no legal impact, an official referendum schedule for October will let residents of the city centre vote for self-rule – which could result in restrictions on tourists. 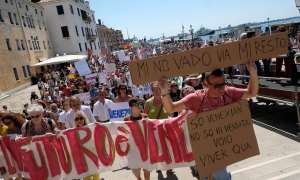 The anti-tourism backlash has spread to other parts of Europe with protestors venting their frustration this year at cruise ships and city-breakers in historic cities like Dubrovnik and Barcelona. Locals are simply fed up with tourists – some of them inconsiderate – piling into historic sections of their cities in numbers too big for the infrastructure to handle.

There’s also the question of the damage that mega-ships do to the local environment. For example, last year the 134,000-ton Carnival Vista caused chaos at a Sicilian marina simply by leaving the dock. As the wind pushed the ship perilously close to the nearby marina, the captain activated its port thrusters and created a massive wake that swamped a floating dock and the vessels that were moored to it. 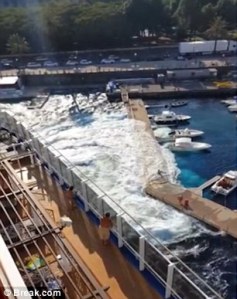 Carnival Vista swamps a nearby marina in Sicily

Then there’s the question of air pollution. Southampton, which is Europe’s busiest cruise terminal, is one of nine UK cities that breach air quality guidelines even though it has very small manufacturing sector. In a recent article about the issue, the Guardian newspaper quotes a representative of a local citizens’ group as saying: “Up to five large liners a day can be berthed in the docks at the same time, all running engines 24/7. Pollution from the port is leading to asthma and chest diseases. We are now seeing more, bigger liners but also very large bulk cargo ships.”

Furthermore, the newest mega-ships are being equipped with more efficient engines and pollution abatement technologies that make them more environmentally friendly.

In addition, mega-ships offer more choice when it comes to public facilities like bars, shops, casinos, restaurants, and health spas. They also have more recreational options like climbing walls, water slides, go-cart tracks, wave pools, skating rinks, bowling alleys as well as extensive entertainment choices that include major production shows and big-name performers. So if you’re going to be at sea for long stretches of time, or are the kind of person who gets bored easily, you’ll have a lot more options to do things on a mega-ship. 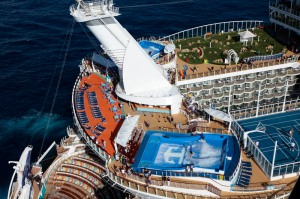 And while mega-ships can dominate smaller cities and towns, they can fit very nicely into larger ports of call, and look at very much at home on the high seas.

In that regard, the cruise industry would do well to remember the story of the woman who while looking at the mirror in her bathroom to see how her new dress fit, asked her husband “Is my bum too big for this?” 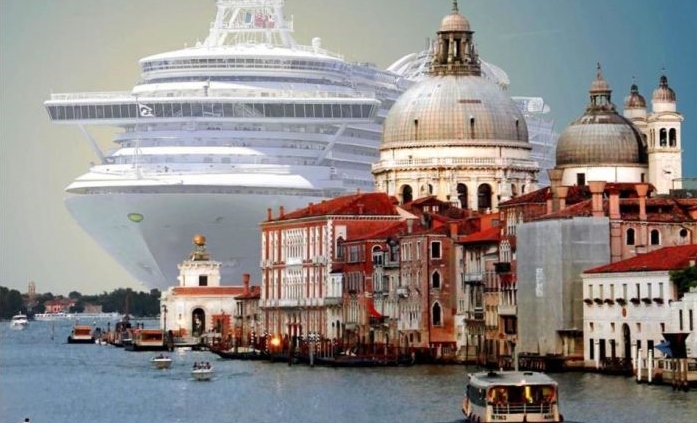