We had settled in for lunch in the tiny hamlet of Fanlac deep in the Dordogne. I had selected the ‘Le Gourmand’ option from the menu. Can there be too much of a good thing?

It was a dreary, drizzly day in the Dordogne, a Sunday morning in fact. We were staying in the fairy tale town of Sarlat and had decided to venture forth and attend the farmers’ market in the village of Saint Cyprien. In spite of the damp, we thoroughly enjoyed ourselves and had worked up a considerable appetite by the time the stalls were being dismantled just before noon. The ever resourceful Hélène, particularly when it comes to starvation abatement, had read about a restaurant tucked away in the tiny hamlet of Fanlac. It was operated by a farming family (Famille Roger) and only opened for lunch on Sundays. It sounded rather sketchy to me, but I relented knowing full well what lay in store should feeding time be delayed. She anxiously gave the restaurant a call and to her delight found out that they had one remaining table for two available. 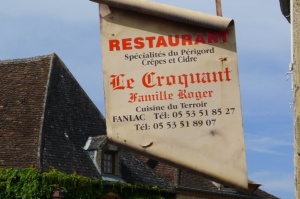 The scene of the crime – Le Croquant

So off we headed for Fanlac along deserted, meandering back-country roads, over bucolic hill and dale through the dank Dordogne day. Before too long we came upon Fanlac nestled atop a small rise. Fanlac is a drop dead gorgeous little place with immaculately maintained stone houses, lovely gardens and a 12th century fortified church, all resting in unequalled serenity. It was the setting for the French historical film and popular TV series, Jacquou le Croquant. The Lascaux caves with their troglodytic paintings lie nearby.

The restaurant wasn’t hard to find. It sported the only commercial sign in town and it was right across from the ancient church. The front door was welcomingly wide open, permitting tempting aromas and merry chatter to spill out. The inside was equally hospitable. We were warmly greeted by the affable owner as if we were long lost friends and were ushered to an inviting table with its quaint rose-patterned table cloth. Radiant spring flowers festooned the tables and hung from the stone walls. The tantalizing smells intensified our hunger which by then had reached ravenous proportions.  We studied the menu with a sense of great urgency and anticipation. Hélène settled on a modest selection of wholesome fare and suggested that I do the same. But I had spied the ‘Le Gourmand’ option, a seven course tour de force that seemed somehow exquisitely appropriate under the circumstances. It would permit me the opportunity to sample an array of Le Croquant’s delicacies and it was only 32 Euros. It was obviously a tasting menu whereby I would sample tiny portions of each course. Or, was it? Hélène gave me the look.

Inside – a shame you can’t savour the aromas

With our food choices decided, it was time to consult la carte des vins. This is always one of my favourite parts of a restaurant meal, particularly when in a new viticultural area like the Bergerac appellation of the Dordogne. Bergerac features many of the same grape varieties as does its much more famous downstream neighbour, Bordeaux. But, due to its lack of renown (cleverly orchestrated by les Bordelais over the decades), splendidly crafted bargains abound. Such was the case with the two bottles we selected to wash down the farmers’ fare. The first was a 2012 Château Ladesvignes, a spritely Sauvignon Blanc with lovely white fruit and wet pebble aromas. The second was a 2009 Château de Tiregan Pécharmant, a splendid blend of Merlot, Malbec, Cabernet Sauvignon and Cabernet Franc. Everything was set for the feast to begin.

One – lots of foie gras

And so it began. The appetiser consisted of a slab of foie gras on a gigantic slice of homemade bread. The photo was taken after it was half eaten! By the way, did I mention that the Dordogne is noted for its marvellous foie gras? And, you can’t escape it. Order a simple salad and it arrives bearing a massive wedge of foie gras; a side of potatoes – more foie gras. I swear they’d serve it with tarte aux pommes if given the chance. Anyway, it was delicious and went wonderfully with the Château Ladesvignes. One course down, six to go. No problem.

A rustic onion soup was proffered next. It was served in the tureen in the photo from which you ladled the sloppy but yummy mess into a large bowl. It was simply wonderful. Hélène remarked after I had finished the first bowl, “Surely you aren’t going to have any more?” I couldn’t help myself and proceed to power my way through another bowl and a half till it was all gone. Two courses down, a mere five to go. Sheer child’s play.

Then came a three-egg mushroom omelette. I can’t even begin to tell you how absolutely scrumptious this enormous ball of pure succulence was – slightly runny in the middle, nicely browned on the outside and the mushrooms tasted extra, well, mushroomy. Did I mention that it was very, very large? The Château Ladesvignes had served nobly and was now hors de combat. Who was it who said this was surely a tasting menu with tiny samples? Three down, just four more to go. It was all becoming just a little challenging.

Course four? Bring it on. A perfectly cooked confit de canard awash in a sea of semi-mashed potatoes with onions. A certain state of sluggishness was starting to settle in. But, with the assistance of the Pécharmant I managed to perform yeoman’s service on the fourth round of what was beginning to feel like the endless meal. The duck was delicious, as was the wine that tasted like a very good red from a Saint-Émilion satellite such as Castillon Côtes de Bordeaux. With a little effort, the fourth course bit the dust. There were but three more to go. Egad, three!!! 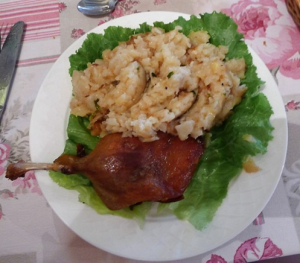 Four – roasted duck leg and a sea of mash

Maybe they’d forget about the fifth course? Not a chance. There it was before me, the Dordogne version of boeuf bourguignon. A lot of it, with more potatoes and a large piece of bread in case I was in need of more carbohydrates. I was definitely past my plimsoll line and had notions of depositing a sizable part of it in a potted palm a la Mr. Bean when I caught a glimpse of Hélène giving me the old ‘no you don’t Mr. Smarty Pants’ look. So I persevered and choked it all down. Sweat was beading on my brow. There were yet two more courses in waiting. Gasp.

Under normal circumstances the sixth course would have been most reasonable. But, these definitely were not normal circumstances. There sitting tauntingly before me was a round of locally produced chêvre with three marvellous fruit compotes to add to my caloric intake. And, of course, there was more of that wonderful farm-baked bread upon which to anoint it all. What followed was an extended, heroic struggle but I managed vanquish course six and emerge victorious. The last of the Château de Tiregan aided and abetted the titanic struggle. Just one course remained. Groan.

When the going gets tough, the tough take a nap

Oh merciful day! The seventh and final course was ceremoniously ushered out. It was a relatively small scoop of vanilla ice cream made sur la place (no foie gras or home-made bread in sight). I found room for it somewhere near the top of my esophagus. I then let out a plaintive moan. As our youngest daughter had long ago proudly exclaimed after finally making it to the top of a playground jungle-gym, “I did it.” Need I add that Hélène was not greatly impressed?

After settling our account, very reasonable considering the amount we had eaten (note the incautious use of the word ‘we’), I gingerly waddled across the rue principal and settled in for a long spring’s nap on the first thing I spied appropriate for the occasion – a stone bench. It took me three days to fully recover.  Thus ends the story of this itinerant oenophile’s marvellous meal at the Famille Roger’s wonderful restaurant in Fanlac. If you are ever in the neighbourhood on a late Sunday morning, I highly recommend it. But, whatever you do, don’t order the ‘Le Gourmand’ option.

Commercial Alert! Why not enrol in our Arthur’s Cellar Wine Club to find out all about the wonderful wines we import and the stories behind the good folks who make them? No cost or obligations. 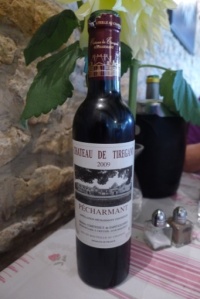