ROCKING ‘ROUND THE HORN 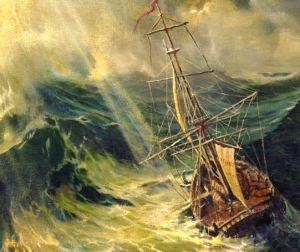 Sailing around the tip of South America was once the fastest way to reach the Far East, Australia and the South Pacific. But as we discover, Cape Horn’s reputation as one of the most inhospitable waterways in the world is still well founded.

The winds began to howl and the seas started to churn as we sailed out of protected waters south of Ushuaia to begin our transit around Cape Horn.

We were about to enter one of the most hazardous shipping routes in the world, where fierce winds can blow around the world almost unimpeded by land, ocean currents are dangerously strong, and furious waves can attain heights of up to 30 metres (100 feet) as they funnel through the shallow water south of the Horn. At least we didn’t have to worry about icebergs, which in winter can create an additional hazard!

Cape Horn is a tiny island located at the most southerly point in South America, just 650 km (400 miles) from Antarctica. It’s also the northern boundary for Drake Passage, which is the main waterway between the Atlantic and Pacific oceans for ships too large or unable to navigate the narrower Strait of Magellan and the Beagle Channel.

Sir Francis Drake discovered the passage in 1578 after his ships were caught in a storm and blown south of the Strait of Magellan to the south of Tierra del Fuego. However, the passage was never explored until Dutch navigators, seeking an alternative route between the seas, sailed through it in 1616, and named the southernmost point of land ‘Kapp Hoorn’ in honour of their native city of Hoorn in Holland.

From the 1700s until the Panama Canal opened in 1914, Drake Passage was one of the world’s most important trade routes for clipper ships carrying cargo around the Horn from Europe and the east coast of America to the Far East, South Pacific and Australia. One of the greatest clippers to go ’round the Horn was The Sea Witch, which in 1846 set a record for the fastest voyage between New York and China, making the journey in 104 days and the return trip in just 81 days.

Painting of The Sea Witch

However, the almost continuous state of nasty weather in the area, particularly for ships sailing from east to west between May and September, could make it impossible for them to cross the Horn for weeks at a time. Or worse, end up wrecked on the rocks.

This challenge has been recorded in the logs of many famous mariners, including Captain Bligh. During his fateful voyage to Tahiti aboard HMS Bounty in 1787, the Captain attempted to enter the Pacific Ocean via Cape Horn for an entire month, but the weather was so bad he eventually gave up and sailed east around the Cape of Good Hope off the coast of South Africa. The lost time at Cape Horn led to a five-month delay in Tahiti as they had to wait for their cargo of breadfruit trees to mature. Over this period, naval discipline began to break down and eventually led to the infamous Mutiny on the Bounty.

There was no thought of mutiny as our 90,000-ton, gas-turbine powered cruise ship Radiance of the Seas inched closer to the southwest tip of Cape Horn. But as it started to turn east, we began to understand how difficult it must have been for the crew of small, wooden sailing vessels to cope with these unpredictable conditions. 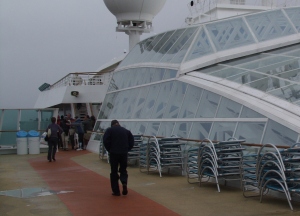 Panel blown off the solarium lands on the deck

By now, the winds had grown to near hurricane force, and were gusting at between 50 to 60 knots. Our bow was crashing through 10 to 15-foot seas in a light mist. A piercing rain mixed with a light hail was needling down on us. Passengers on the outside decks were holding on to rails and stanchions for support. Then a small glass window ripped away from the roof of the Solarium Pool and came crashing down on the promenade deck not far from us. And we were crossing during the Southern Hemisphere’s gentle summer – with the wind and current at our stern as we sailed from west to east!

At this point, the cruise ship behind us, the Norwegian Sun, decided to turn tail and head north of the Cape in a slightly more protected strait. But we pressed forward, with passengers grinning into the howling wind, snapping photos like crazy, and loving every minute of our historic passage across the Cape and into the annals of sailing history as seamen who have successfully sailed around the Horn.

We make it past Cape Horn

According to our captain, this entitled us to a number of special privileges, including the right to dine with one foot on the table, sport a tattoo of a full-rigged ship, and wear a gold loop earring in our left ear. And if we ever make it around the Cape of Good Hope in southern Africa, we can add the right to place two feet on the table!

Just a few miles north of Cape Horn, the bad weather disappeared as quickly as it had arrived, and we sailed into gentle seas, light winds and beautiful sunshine along the southeastern coast of Argentina. We had spent several hours in the rough seas around the Cape, and we were certainly grateful for the positive change in weather. And, of course, for the right to place our feet on the dinner table that evening!