TREASURES IN THE FRENCH HINTERLAND 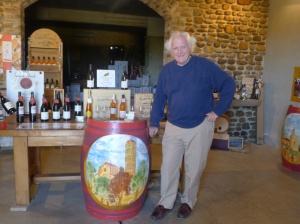 Jim Walker continues his wine adventures in France by revealing that every once in a while he discovers a ‘new’ winery that seemed almost too good to be true. Same thing goes for places to have lunch.

Such was the case with our serendipitous discovery of Domaine Camp Galhan producers of divine red, white and rosé Vin de Pays Duché d’Uzès and Vin de Pays d’Oc from the heart of the Languedoc in southern France. As Robert Parker remarked in issue 173 of his Wine Advocate (he always seemed to discover notable wines before I did), ‘Lionel and Alain Pourquier defy their entitlement to only a Vin de Pays appellation with wines of extraordinary value.’

We met Lionel Pourquier several years ago when he was sharing a booth with Patrick Chabrier of Domaine Chabrier Fils (see my last post: The Irresistible Chabriers) at the Vinisud wine fair in Montpellier. As is the norm with Patrick, things were utterly chaotic at his side of the booth, so we decided to try some of Lionel’s wines to pass time till some semblance of calm returned. What a wonderful surprise! We were completely enchanted by these fresh, flavourful, obviously well-made wines. To be certain that we weren’t being influenced by the prevailing mayhem, we asked Lionel if he could let us have some samples in order to try them under more tranquil circumstances. This we did a little while later in the town of Sarlat in the Dordogne (where we were scouting out that locale for Hélène’s tours of France). We had comfortably ensconced ourselves in a charming mid-town rental suite and had set up some simple fare (yeah, right – figs stuffed with foie gras, roast duck, local pâté, remoulade, fresh baguette, etc.) with which to sample our vinous victims. We found them to be even more enjoyable than before (no doubt the tranquil atmosphere had much to do with it)! While we adored them all, a white called Ripa Alta really caught our attention. Here are my tasting notes: 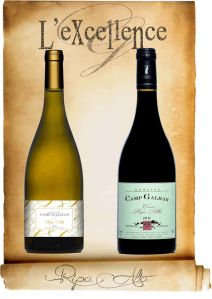 ‘The splendid 2013 Ripa Alta Blanc was made from 95 per cent Chardonnay and 5 per cent Viognier, a heavenly combination. The vines were 14 years old (don’t let their relative youth dissuade you) and the yield was a very low 30 hl/ha. It rested in new and used oak for nine months. This amazing Vin de Pays d’Oc is a lovely golden colour and offers up pleasant aromas of peaches, pineapple and honey with mineral aftertastes. This elegant white is beautifully balanced and medium bodied with lovely acidity and a long, creamy finish. It is a very well made wine that will go splendidly with poultry dishes, coconut shrimp (oh, sweet heaven!), lobster Newburg or au gratin (drool!) and mussels. We later introduced it to our wine club for a mere $25 the bottle.’

Here’s a little background about Domaine Camp Galhan. Located near the village of Ribaute-les-Tavernes, not too far from bustling Uzès, the Camp Galhan vineyards are situated high above the banks of the Gardon River in the foothills of the bucolic Cévennes mountains. The winery gets its name from the Roman camp Galhan that had been located adjacent the present winery. The 40-hectare property and vineyards have been in the Pourquier family since the early 20th century and they have long been renowned for their superb grapes that used to be sent each year to the local co-op. But Lionel tired of giving his great grapes to the co-op only to have them turn them into mediocre wine. So, in 2001 he built a modern winery into the side of a hill, designed so that gravity moved the grapes and juice during vinification (thus avoiding the use of much harsher mechanical pumps) and started to produce his own wines.

As they say, at least  80 per cent of great wine making occurs in the vineyard. Lionel has worked hard to isolate the best vineyard sites in the hillsides above the valley and to modernize his wine making techniques. He farms his vineyards using organic methods in the lutte raisonnée manner (the reasoned struggle in English: basically, an absolute minimal use of chemicals, but not quite organic) and green harvests (where bunches of grapes are removed from the vines in the spring to decrease yields and enhance the remaining fruit). Lionel then hand selects only the best grapes to go into his wines, which most recognize as being among the very best in the region (along with Domaine Chabrier Fils and Les Vignes du Lys in my opinion!)

By the way, in addition to great asparagus, big, juicy onions and delicious gariguettes (succulent little wild strawberries), Lionel grows durum wheat which he sells to high-end pasta producers, mostly in Italy. He was recently president of the durum wheat growers association for the region.

We visited Lionel, a taciturn and camera-shy individual, at his winery a few years ago and after sampling his latest creations we bade him a fond farewell and headed off on the back roads of southern France. It was just before noon when Hélène plaintively proclaimed that dreaded and oft heard refrain, “J’ai faim.” “There won’t be a restaurant for hundreds of kilometres,” I opined, hoping to get back to civilization before dusk. “Oh no?” she squealed with glee, “What’s that?” 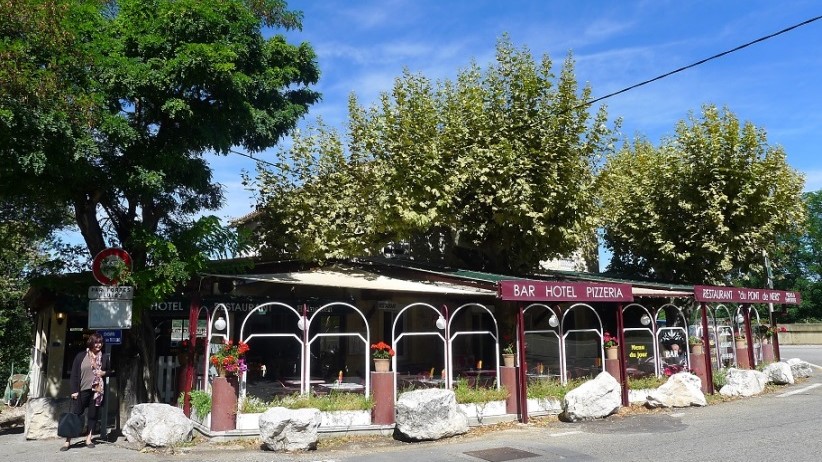 Lo and behold, as if by magic there appeared a long, low, wine coloured structure bearing the words Bar Hotel Pizzeria and Restaurant du Pont de Ners. Large boulders were strategically scattered about its perimeter. Could it be that they had been strategically positioned to protect the edifice from motorists under the influence of the local liquid?

She had to be kidding, I thought to myself, this place is surely the dive of all dives. But, long and painful experience has taught me that in these dire circumstances, the starving damsel in distress never kidded. So I parked our rental car and with large measures of fear and trepidation ventured into the gloom of the restaurant. What I saw reinforced all my suspicions. A gaggle of locals was gathered at a rough bar, sipping their noontime Pastis amid a fog of fumes emanating from their Gitanes and Gauloises. They turned in unison and gave me that glare of suspicion reserved for only the most noisome of intruders. The large, joyless dining room was empty. It reminded me of a Legion hall that had seen better days. But, underneath all that tobacco smoke there was something quite pleasant that tweaked my olfactory senses! Could there be a silver lining to this rather ominous culinary cloud? Realistically, what could we do but give it a try?

The deserted patio looked somewhat more inviting and better for our health than the dining room, so we settled in at the least offensive table (we had the choice of them all). Spiffy paper placemats touting local enterprises festooned our table and a wad of folded paper placed under a leg greatly reduced, but did not eliminate, its nautical sway. Pizza didn’t appeal so we resigned ourselves to the daily prix fixe luncheon option. Three courses: €12.30! I asked the very pleasant server if that included all three courses. “Oui, bien sûr, monsieur.” I then asked if we might have a jug of rosé and how much it cost. “Mais oui, monsieur, c’est compris.”

Well, lo and behold, all three courses were terrific and the rosé was more than quaffable! The resurrected Hélène opted for a cup of coffee to end her meal bringing the total bill to €25.8o, ($36.89 Canadian at the then prevailing exchange rate) and that included tip and taxes.

So there you have it, two diamonds in the rough – Lionel Pourquier and his splendid wines from Domaine Camp Galhan and the restaurant du Pont de Ners. We happened upon both by sheer coincidence. So many things in life seem to work out that way if one just gives them a chance.

PS: More of the Champagne Forget-Brimont elixirs have arrived at the LCBO just in time for the festive season. In addition to the Brut and Rosé Brut we have ordered some Extra Brut and 2006 Vintage. All are crafted from 1er Cru and Grand Cru grapes. To learn more or, better yet, to order some of these terrific bubblies, just visit the Arthur’s Cellar website. (Editor: I ordered a case. Highly recommended!)