Wine aficionados are not born, they are definitely created. It takes a great deal of care and feeding, not to mention endless practice, to produce true devotees of the nectar of the vine. Fortunately for Jim Walker, our wine correspondent, he was in the right places at the right time to ultimately gain admittance into Bacchus’ realm of vinous delights.

Several folks have asked how I became interested in wine. You might say I had no choice. Wine was omnipresent as a matter of course on our family dining table. Brother Doug and I were always welcomed to have a sip or two. But, in our early days we didn’t care much for the taste so we passed, something we would never do in later years. There would be a fizz called Henkell Trocken (still available today at the LCBO for $14.95 the bottle – imagine the price back then) at any celebration, generic Bordeaux with various roasts and a wide variety of German wines with all manner of fowl. I loved the colourful, fanciful labels and exotic names of those German wines in their tall brown or green tapered bottles. Trockenbeerenauslese sounded so very spiffy.

As time went on, those occasional sips morphed into regular slurps and ultimately full glasses. Through this period Dad was joined by his brother-in-law, our Uncle Kuno, in providing us with a vigorous vinous education and never were there two more attentive acolytes than my brother and me. Kuno Stockelbach was born of Danish parents in Buenos Aires, grew up near Windsor, Ontario and then moved to South Africa where his father Axel established the Ford Motor Company. He found his way back to Windsor and joined Ford Canada where he worked as a test driver and in other capacities. Ford lent him to the Allied war effort in North Africa where he helped assemble flails on the front end of tanks to pre-explode land mines buried in the sand. Throughout his travels Kuno avidly sampled the local fare. I recall him regaling us with the story of him being invited to an Egyptian wedding banquet as an honoured guest where his host presented him with a sheep’s eyeball during the feast. I’ll save you the gory details. Fortunately, he did not include this in our oenophilic curriculum.

Uncle Kuno, always impeccably dressed in three piece suits, made his martinis in a large Erlenmeyer flask and administered the Vermouth (only Noilly Prat: depuis 1813) with an eyedropper. He would save what appeared to be empty bottles of gin (always Hiram Walker: no relation, ruefully) and magically after a few weeks several drops of the juniper-flavoured nectar would appear at the bottom of the bottles. Over time, he would collect enough dregs to make a bonus martini.

Manhattans were another favourite of Uncle Kuno’s: one part sweet Vermouth, (only Martini and Rossi would do) and two parts Canadian Rye Whiskey. The brand of whiskey didn’t seem to matter much, whatever was on sale, for he had his secret ingredient — Angostura Aromatic Bitters. The label said: Famous For Flavour Since 1824. The bitters was first made by Dr. J.G.B. Siegert, a Prussian army surgeon who went to Venezuela to serve in the forces of Simon Bolivar, the liberator of South America. Dr. Siegert was appointed Surgeon General of the military hospital in the town of Angostura and there he created an aromatic bitters which has become famous throughout the civilized world. Angostura Aromatic Bitters is still being made in Trinidad and Tobago. I think what Uncle Kuno liked most was the fact that it contained 45 per cent alcohol by volume and the label listed one of its attributes as a cure for flatulence!

On a related subject, somewhere along the way Kuno had developed the habit of emitting a robust burp after a particularly satisfying meal. This did not endear him to others in attendance, but Doug and I thought it most amusing.

Dad and Kuno, the two bon vivants, would often hold court at Ed Mirvish’s Ed’s’ Warehouse restaurant (sadly long gone) on King Street West in Toronto. They called it The Club. Doug and I would join them as often as possible for grand conversation along with the dill pickles, bread, shrimp cocktails, roast beef, Yorkshire pudding, little peas and mashed potatoes all washed down by Manhattans followed by an Eschenauer St-Émilion and perhaps a brandy. Ed, who always seemed to be there overseeing things, would often drop by our merry table and say to our father: “Jim, I don’t mind if you open a restaurant next door. But please don’t discount.” 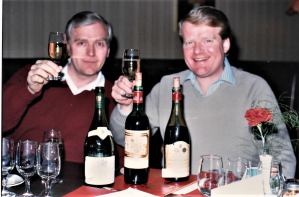 One fateful day in 1972, Uncle Kuno and Dad discovered the Rare Wine and Spirits Store at 20 Market Street in Toronto. At this blinding glimpse of civility one didn’t have to fill out those pesky little prescription forms and wait in line to hand them to the magisterial LCBO clerk who would then disappear into the back of the store to eventually emerge with your allotment of booze concealed in a brown paper bag. No, here you could actually look at the little treasures all nestled in their wonderful wooden cases. From this point on the quality of our wine definitely ramped up a large notch. From hence bottles such as 1964 Ch. Lascombes, 1969 Ch. Talbot and the like found their ways onto our dining tables where mysteries such as the 1855 classification of the wines of the Médoc were contemplated. There were only four first-growths then (the best of the best): Ch. Lafite Rothschild, Ch. Latour, Ch. Haut Brion and Ch. Margaux. It wasn’t until the following year, 1973 that the flamboyant and entrepreneurial Baron Philippe de Rothschild succeeded in getting his Ch. Mouton Rothschild elevated from second to first-growth status. Thus the Baron was able to change his defiant wine labels from Premier ne puis pas, second ne daigne, Mouton suis (First I cannot be, second I will not call myself, Mouton I am) to Premier je suis, second je fus, Mouton ne change (First I am, second I was, Mouton does not change).

One day my brother Doug called to say that he had made his own foray into the Rare Wine and Spirits Store. He had purchased four bottles – one each of the four first-growths from the 1970 vintage. He had paid just under $100 for the four of them! I accused him of being the biggest spendthrift and wastrel to ever be placed on this earth. They currently sell for around $1,000 each, if you can find them.

An old friend gave me a price list from the Rare Wines and Spirits Store dated May 16, 1977. Here is a sample of some of the prices contained therein (including 10 per cent tax). Note the nicely aged vintages:

The last bottle with Kuno

I remember well and with great nostalgia the last bottle of wine I shared with Uncle Kuno. It was at his place, a 1966 Château-Figeac, a St. Émilion Premier Grand Crû classé. It was a dark garnet, highly perfumed wine with a pronounced nose of asian spices and Provençal herbs, cherries, sweet red and black currants with traces of coffee, cedar, vanilla and licorice. A medium-bodied wine, it was full and round with a sensuous aftertaste that seemed to last for an eternity. As we breathed in the heavenly aroma and took our first sip, Kuno uttered his favourite toast: “Astonishing luck!” I liked that very much.

There you have it, the tale of how I got my introduction into the wonderful world of wine. I was most fortunate to have excellent tutors, an ardent fellow neophyte and access to a pretty decent array of subject matter. And, speaking of beginnings, as we commence 2018 I want to wish you all a happy, healthy and prosperous year, one filled with many a fine bottle. Astonishing luck!

PS: The LCBO is in the process of releasing our lovely Southern Rhône wines (Côtes du Rhône, Lirac, Vacqueyras, Gigondas and Châteauneuf du Pape) from the superb 2015 and 2016 vintages. First will be the highly-rated treasures from Domaine Roger Sabon, then the exotic elixirs from Domaine Palon and finally the great Grenache-based beauties from Domaine Giuliani. You can learn all about them at our website. Your taste buds will thank you (and so will I).

[Editor: Congratulations to Jim on his 22nd story on Gentleman’s Portion as we head into our sixth continuous year of publication with at least one story posted ever week.]

Featured image: Part of ‘Feast of the Gods with Bacchus’ attributed to the Brueghel Family