Organic heritage carrots on display at the farmers’ market

Buying carrots at a farmers’ market on the weekend takes me deep into a political issue that highlights the conflict between local food producers – who we might call ‘real farmers’ – and re-sellers – who buy most or much of their produce at a food terminal. With vested interests behind the re-sellers, it’s hard to believe it’s a fair fight.

I’ve delved into the whole story of farmers’ markets, farm to table food, local food, community shared agriculture (CSA) and more in several articles here on Gentleman’s Portion and on my two TV series, Escapes with Nigel  and Market to Table. Most of the organic farmers seem legitimate and at times of the year when they can’t grow enough to stock their market stalls, they are quite open about filling up their tables from other organic sources. These organic farmers are the ones who literally get their hands dirty, preparing the soil, planting, weeding and harvesting. They live a hard and rewarding life, though not necessarily financially rewarding. One of them tells me that he calls his operation ‘not for profit’ simply because he’s not making a profit. With deep roots in the community, he’s able to keep going with a substantial helping of community support.

We shop regularly at several Toronto-area farmers’ markets, and particularly at The Stop Organic Farmers’ Market at Artscape Wychwood Barns, where we buy from a few favourite vendors. I’ve decided to make carrot soup for dinner when we have sailing friends for supper on Sunday night, so at the Circle Organic Community Farm, I stock up on the tasty orange roots. I’m able to pick exactly the ones I want from heaped baskets. I also hand select some cute and uniformly smaller carrots to go with the main course. It’s while I’m shopping that they tell me the trouble they’re having at another farmers’ market – this one nearer their farm in Millbrook, Ontario.

In Peterborough there are two weekly farmers’ markets. The outdoor summer one is on Wednesdays downtown and the Saturday one operates year-round elsewhere in the city, going indoors from November to April. It’s the Saturday market where the fuss is going on. Circle Organic and several other organic farmers have been given ‘pink slips’ and banned from the market, for allegedly breaking some obscure market by-laws. It’s hard to pin down exactly what rules they have broken as allegations against them are vague and anonymous, but the market’s board have nevertheless believed the objectors and tried to ban the farmers. The organic farmers believe that produce re-sellers with vested interests and deep roots in the community have used their well-established contacts to try and run the competition off the site, but none of that has been proven. They’ve hired a lawyer and are fighting back.

Provincial law states that 51 per cent of the stock on a farmer’s stall has to be harvested by the primary producer, but re-sellers seem to have been able to get around the rules. As a genuine certified organic producer, this makes things very hard for Circle Organic. What the buying public can do to support organic producers, is ensure they insist on buying from real farmers, even if the produce is a few cents more expensive.

Meanwhile, I set to work to make my carrot soup, which readers can find in a recent article and in Market to Table: The Cookbook. Diane has said that the version in the cookbook is a bit spicy for her taste, so I leave out the fresh grated ginger, and cut the measures for curry powder and turmeric in half. The result is judged to be delicious so please take note if you prefer a less powerful version of the soup. On a cold winter’s eve, it really hits the spot.

For our mains, I have chosen my very popular Cumberland fish pie. I was going to use fresh water fish, but Georgian Bay fisherman Andrew Akiwenzie has wisely kept his boat out of the water in the face of freezing waters and very strong winds, and has not shown up this day. Across the aisle from his usual spot, Fisherfolk have excellent cod and salmon, but no haddock, so I decide to make the pie without the latter. Again, the recipe is in The Cookbook, and from the reaction of our guests, the lack of one fish doesn’t seem to matter. I’ve made enough for eight, so we will have amazing left overs later in the week.

Finally, I have to pick a dessert. For the past few weeks we have been buying bottled peaches from Bizjak Farms of Beamsville, more famous for their apples. Mimi Bizjak, who mans their stall at The Brickworks Evergreen Farmers’ Market, appeared on the TV series, but its her brother Milan who sells me the delicious sweet peaches, still in supply in late January. I hope they last a few weeks longer, but I always buy two jars just in case. Now they’re down to the smaller ones, so I suppose they are running low. Usually, we eat them as they are, with a dollop of ice cream. In The Cookbook, I have recipes for two types of peach pie, but I can’t face making pastry on this occasion. The kitchen is too hot from an afternoon of carrot soup blending and fish pie assembly to make good pastry, so I look for a crumble or crisp recipe instead. Horror or horrors! There’s no such thing in my book, so I have to create one from scratch, using a bit of this recipe and a dash of another.

Here’s the result, and it turned out very well indeed. 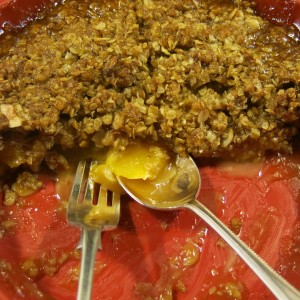