Our wine correspondent, Jim Walker, had searched high and low for a top notch Beaujolais to add to his stable of fine wines. He found one at last … but it came with a rather nasty surprise.

We had long been searching for a leading Beaujolais producer to add to our winery lineup and had all but given up on finding one. Then, out of the blue we received an email message from Alexandra Bailly, Export Manager for Château des Gimarets. Would we be interested in representing their award winning Moulin-à-Vent wines in Ontario? I have always loved the wines from Moulin-à-Vent, acknowledged by many to be the most serious and age worthy of the 10 Beaujolais Crus. I spent some time researching the winery and their wines. Everything checked out brilliantly, so I asked Alexandra to send me a few bottles to sample.

After letting the wines settle for a couple of weeks, I organized a small tasting panel to critique the wines. We all found the 2011 Moulin-à- Vent Tradition to be particularly pleasing. Here are my tasting notes: ‘I can’t say enough good things about this outstanding wine. Made of course from 100 per cent Gamay, it seems to have everything – power, complexity and charm. It is a lovely, elegant, medium-bodied wine and is truly delicious. A deep red colour, the nose is of red fruit (strawberries and cherries), with floral notes, some wood (slight cedar) and spices. It is beautifully balanced, possesses nice soft tannins and good length. This is a very serious wine and would be a fine companion for salmon in almost any form and roast fowl. It will keep nicely and perhaps become even more enjoyable (hard to imagine) for at least another five and more likely ten years.’

Everyone pondered the $33 price at which we would have to sell it to our wine club but thought it okay when reminded that a wine of similar pedigree and quality from Burgundy or Bordeaux would cost at least twice as much.

It was arduous work, but the final verdict was an emphatic thumbs-up. It was unanimous – the Moulin-à-Vent from Château des Gimarets would be a most worthy addition to the Arthur’s Cellar Wine Club. 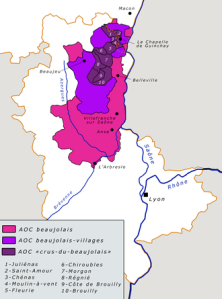 Beaujolais
Here’s a little background on Beaujolais. In addition to being one of the most misunderstood and maligned wine regions of France, Beaujolais is also one of the two most beautiful (the other being Alsace). Its vineyards are strung across enchanted hillsides that mark the beginning of France’s Massif Central. The numerous charming villages make it a wonderful place to visit and the many fine restaurants and great wines conspire to make it darn near perfect. Situated between the cities of Mâcon to the north and Lyon to south, the Beaujolais region is about fifty kilometres long and between eleven and fourteen kilometres wide.

The vast majority of the wine produced in Beaujolais is red and can only be made from the Gamay grape (officially, Gamay Noir à Jus Blanc). But, they also make what is often a most delightful white from Chardonnay (and occasionally from Aligoté – permitted if planted before 2004). And, while there are some four thousand growers in the region, most of them sell their harvests to the few large firms that dominate the business.

Robert M. Parker, Jr. in his tome ‘Burgundy’ notes: ‘Gamay seems to thrive in the stony, schistous soils of the region. Most red wine grapes have trouble producing high-quality crops in granite-based soils, but Gamay seems to be a natural. The compelling characteristic of Gamay wine is its youthful, fresh, exuberant, crunchy fruit, which the vignerons of Beaujolais have learned to maximize by producing it in an unusual method called carbonic maceration. In this style of vinification, the grapes are not pressed, but simply dumped unceremoniously into a vat in full bunches. Grapes at the very bottom of the vat burst because of the weight on top of them. That juice begins to ferment, warming up the vat and causing fermentation in the unbroken grapes to begin inside their skins. The advantage of this technique is that a wine’s perfume and fruity intensity is largely related to what is inside the grape skin. The acid and tannins are largely extracted from the breaking and crushing of the skins.’

Beaujolais Nouveau
And then there is Beaujolais Nouveau! The Beaujolais had always made a vin de l’année to celebrate the end of the harvest, but until WWII it was only for local consumption. However, in 1951, some enterprising members of the Union Interprofessionnelle des Vins du Beaujolais (UIVB) pounced upon a sensational marketing ploy by initiating a race to Paris carrying barrels of the new harvest. What a great way to unload oceans of what otherwise would become vin ordinaire and to generate much needed cash flow. And, what a great excuse for a party! Over succeeding vintages the races spread throughout Europe and North America. The third Thursday of November became the official launch day of Beaujolais Nouveau in 1985. But, the fruity young wine became a mixed blessing for Beaujolais. It certainly created massive market awareness for the wine producing region and can be credited for weaning many North Americans off sugar-laded blushes and leading them on their way to more serious wines.

Much to the chagrin of the producers of serious Gamay wines, Beaujolais Nouveau created a virtually indelible image for the region … cheap and cheerful. It is very difficult for them to find markets for their wines and when they do, prices are depressed. Of course, the flip side to this dilemma is that we are able to purchase superb wines from Beaujolais for a fraction of what similar wines a few kilometres to the north in Burgundy would command.

The Moulin-à-Vent of Beaujolais

Moulin-à-Vent
With the town of Romanèche-Thorins (home of Georges Duboeuf’s massive wine enterprise) as its hub, Moulin-à-Vent is often referred to as the King of Beaujolais. But, the wines made there are not typical of Beaujolais and many say they bear more in common with Burgundy. As Robert Parker notes: ‘There is no doubt that the best Moulin-à-Vents are the richest, fullest, and most ageworthy wines produced in Beaujolais. A seven or 10-year-old example from one of the best producers will have more in common with a Pinot Noir from the Côte de Beaune than anything produced from the Gamay grape. The production of Moulin-à-Vent, which is now creeping up towards 400,000 cases annually, has no shortage of buyers willing to pay one of the highest prices asked for any of the crus of Beaujolais. Many attribute the underlying richness and structure of Moulin-à-Vent, which produces larger-scaled, more muscular wines, to the fact that the granite-based soil is rich in minerals such as manganese. This provides a greater depth of color and flavor than Gamay is capable of achieving from the granite soils of the other crus.’

Château des Gimarets
The Château des Gimarets winery was founded in the 17th century, during the reign of Louis XIV … at the time when Molière was producing his plays, Lully was composing his music and Rembrandt was creating his paintings. The original château was built in 1650 on the foundation of a Roman Villa that even back then had been surrounded by vineyards. It was destroyed by a fire in 1780 and rebuilt in 1810 by Louis Chaumet, a French prosecutor from Mâcon. This romantic house is located in a bicentennial park amid very old cedar, oak and pine trees, facing the vineyards, near the windmill.

Eric and Nathalie Boyer purchased the estate in 2007 and proceeded to modernized its equipment and enhance the 4.5 hectares of vineyards (with vines averaging 45 years of age). They have adopted grape growing techniques that respect nature and employ the best elements of modern and traditional wine-making practices in the cellar. They produce about 25,000 bottles each year. Their efforts have been richly rewarded as their top-quality wines have regularly won awards and rave reviews from the wine press.

Not too long after we agreed to represent their wines, we visited Eric, Nathalie and Alexandra at Château des Gimarets. It was a lovely early fall afternoon and they had prepared a most delightful alfresco luncheon for us accompanied by several bottles of their wine, of course. It was a splendid afternoon filled with lively conversation between slurps. Three chickens ambled nonchalantly about the grounds adding to the bucolic atmosphere.

A dog was barking incessantly nearby. Eric explained that they had a new puppy that was more than a little boisterous. For that reason he was securely locked in his pen. The barking became more and more persistent. No doubt the dog wanted to join the party and meet the visitors. Suddenly, the barking ceased and who should appear on the scene, wagging his tail with great gusto but the pup. After greeting us all and begging forgiveness from Eric, he spent the remainder of the afternoon herding the poor chickens.

Later on that day we toured the Beaujolais area and spent the night comfortably in the Boyer’s guest suite. Following a fine breakfast we bade Nathalie and Eric a fond farewell secure in the knowledge that we had another solid vinous business relationship in hand.

I am truly sorry for the intrusion

We offered the Moulin-à-Vent from Domaine des Gimarets to our wine club on two occasions, with limited success. Member feedback told us that there was muted enthusiasm for Beaujolais priced in the mid-thirty dollar range, no matter how stellar its pedigree. We also presented these wines to LCBO Vintages a couple of times with no luck. However, we remained confident about the long-term prospects of the fine Moulin-à-Vent from Château des Gimarets.

A while later I was leafing through the latest issue of The Vintages Magazine, the LCBO’s bi-weekly periodical that announces the wines soon to be for sale in its upscale retail locations. There before me was our very own 2011 Moulin-à-Vent Tradition on sale for only $15.95 the bottle! (It is important to note that the LCBO stipulates that a given winery may have just one agency representing it in Ontario.) To put it mildly, I was totally stunned. I contacted Eric to find out what going on. It seems another Ontario agent had contacted him and convinced him to deeply discount his wine (to less than half the price he sold it to us). He was going to contact us, but …

I guess all is fair in love and wine.

PPS: I invite you to visit my Arthur’s Cellar Wine Club homepage to find out about the delicious wines from the Southern Rhône that we have (and will have) on offer.