It’s salad time and there’s nothing better for a light supper on a warm evening than a fresh salad with a celebrity touch.

Either start your meal with a salad in the American style, or after the main course in the French style, or alone if that’s enough to satisfy your appetite. I’ve written about my favourite ‘kitchen salads’ which get built from anything I have left lying around in the kitchen and Jamie Oliver’s cucumber and mint salad is reminiscent of such found ingredients. Yotam Ottolenghi, who has written vegetarian cookbooks and created salads galore, has put lots of thought into his salad, so it needs a bit more work to pull it off. Both are great additions to our salad repertoire and, as usual, I have not copied them exactly, but made them from scratch, using my own measures and proportions. If you follow these recipes faithfully, you’ll be sure of success.

Here are two fabulous salads selected from my wall of cookbooks, recently enjoyed, plus one more from my own book.

I’ve been a fan of Jamie’s since his original Naked Chef TV show, where he cooked simple food for friends in his London flat, after shopping in the local markets. (Rather like my Market to Table series, with a lot more success!) He’s written a couple of dozen cooks, hosted many cooking shows and opened (and closed) a lot of restaurants. 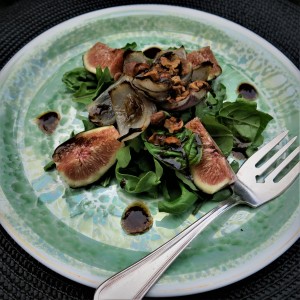 Yotam Ottolonghi is an inventive Italian/Israeli chef also based in London, with a wide following, many cookbooks and six restaurants.

I’ll end with a salad that is a celebrity in it’s own right, perhaps the most famous American salad of all. Caesar Cardini was an Italian immigrant who ran eponymous restaurants in California and Mexico in the 20s, and is credited with inventing the dish in 1924. Many others also claim credit, including several members of his staff. On the evening of the invention, Cardini was apparently running short of salad ingredients and made do with what he had left, adding a touch of grandeur to this simple lettuce-only offering by creating the dressing table-side. Even today, a few restaurants still serve a genuine ‘Caesar’ like this, although its more likely created on the line using pre-made dressing. Quelle horreur!

That great cookbook author Julia Child said that she had eaten a Caesar salad at Cardini’s restaurant in San Diego when she was a child in the 1920s.  Newspaper columnist Dorothy Kilgallen wrote in 1946: ‘The big food rage in Hollywood—the Caesar salad—will be introduced to New Yorkers by Gilmore’s Steak House. It’s an intricate concoction that takes ages to prepare and contains (zowie!) lots of garlic, raw or slightly coddled eggs, croutons, romaine, anchovies, parmesan cheese, olive oil, vinegar and plenty of black pepper.’ So even though it seems to have been around for ever, and sounds French, it’s just something else that started in California, created by an Italian. Who knew?

Whether you make the effort and entertain your guests by making it from scratch at the table, or prepare it all in advance in the kitchen, it’s worth the effort to create this simple yet delicious offering.

SHAMELESS PLUG FOR MY COOKBOOK: How about a copy of my e-book Market to Table: The Cookbook as a gift idea for yourself, friends, family or anyone who loves to cook, now available on Lulu.com, i-Tunes and Amazon. If you click on the link to any of these online publishers you can preview the first chapter for free.