Our wine correspondent Jim Walker’s wine cellar, like some rogue, mutant organism, had gotten completely out of control. It needed severe pruning. But, as he relates in this post, culling one’s wine collection in Ontario isn’t as simple or rewarding as one would imagine.

It was early in 2012. I had come to a most difficult and painful decision. I was going to part ways with a large number of my nearest and dearest friends. I had acquired them over the previous forty years, but they simply had to go. I knew the provenance of each and every one of them and parting indeed would be such sweet sorrow. 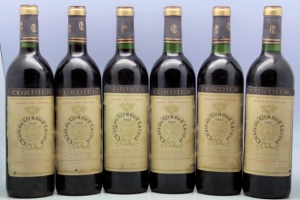 Let’s go back to the beginning. What possessed me to amass a hoard of wine in the first place? Quite simply, because I had come to enjoy properly aged Bordeaux and other classic, age-worthy elixirs, but couldn’t find them on the shelves of our provincial wine monopoly. When I could locate them in other jurisdictions, they were significantly more expensive than their newly released counterparts. Further, such wines were often released en primeur whereby the wines were sold at significant discount while still in the vintners’ barrels. This scheme provided the winery with convenient early cash flow and the buyer with a real bargain. All I had to do was store these vinous gems for a number of years and voila, nicely aged delicacies at a reasonable cost.

I had a previous wine larder comprised of 279 eclectically sourced bottles that was stolen from the basement locker of our condo in Old Montreal. I still have nightmares of the miscreants squatting on some desolate kerb swilling a bottle of my 1972 Château Pétrus. But, this misfortune had a silver lining. I had selected a home insurance policy whereby losses were recovered based on replacement value. I trotted over to the ‘Maison de Vin’, the SAQ’s premium wine store with my inventory listing. The manager kindly valued the entire lot, at current prices in Montreal! The insurance proceeds from this along with a circular saw, a couple of suitcases (that the thugs obviously used to lug away the wine) and other items provided me with the seed money to start my wine collection afresh while much better informed.

Over the ensuing years I was an active participant in the Bordeaux futures market, slavishly adhering to the numerical ratings and recommendations of Robert M. Parker, Jr. 1982 Ch. Gruaud Larose? Sure, I’ll take a case of that. 1986 Ch. Margaux? Why not? 1989 Ch. Haut Brion? Bring it on. The vast majority came from Century Discount Liquors in Rochester, New York. Late in the 1990s I finally realized that my taste buds weren’t going to endure as long as the wine, so I ceased and desisted. But by then the damage was done. There were hundreds and hundreds of the little beauties all nestled in in their racks, bar code tags festooning each neck in their very own climate-controlled cellar.

Corks are public enemy number one of old bottles of wine. They’re fine for 20 to 25 years but then they turn on you. No matter how well stored, these little devils either shrivel slightly allowing the precious liquid to ooze out and air to seep in causing the wine to oxidize or they turn into sawdust rendering their extraction a most messy exercise. That is why, as a terrific public relations gesture, a few wineries such as Château Lafite Rothschild and Penfolds occasionally host recorking clinics in major cities worldwide (a topic for a future blog). Franck Léonor of the Les Cuvées du Firmament winery in the Languedoc joined us for dinner and let it slip that he loved the wines of Bordeaux. So I plucked a couple of senior citizens of this ilk from our cellar and proceeded to open them for him. Both corks had leaked and the wines had maderized. I trotted back down to the cellar and selected three more little treasures. The corks had also failed on two of them! It was at that precise moment I decided that a significant portion of my collection had to go.

However, selling one’s wine in Ontario is not a simple matter. It turned out that it is illegal for one individual to sell his or her wine to another in this province. Only the LCBO is permitted to do this. There are stiff fines if caught and, as a wine agent, I would lose my license to import wine and thus be put out of business. I determined that there were two ways to legally dispose of my wine: donate it to a charity auction such as those run by Covenant House, the Toronto Symphony Orchestra or the Canadian Opera Company, or make them available to the LCBO’s proprietary wine auction (much later I learned that there are also companies that will take your wine to US wine auctions for a fee). The LCBO auction seemed like the better alternative. Under the charitable donation route one receives a tax deduction for the appraised value of the wine which means that the donor realises somewhere in the area of thirty or forty percent of the wine’s value depending one’s personal income tax rate. Besides, Barry O’Brien, LCBO Corporate Affairs Director at the time and a chief organizer of the auction said in 2010, “The addition of Internet bidding puts this annual auction on par with the world’s best.” What could possibly go wrong?

The ‘Vintages Finest and Rarest Wines Auction’ began operation in 2002 and joined forces with Waddington’s Auctioneers in 2009. I got in touch with John, the LCBO individual in charge and asked what I needed to do to consign my wine to the auction. “Just send me the list of the wines you want to sell and we in turn will provide you with our estimated range of what each bottle will realize.” “Don’t you want to inspect the conditions under which the wines have been cellared?” I enquired. “Nope,” was his terse reply. This seemed very odd to me. Surely any potential buyer would want to know how a given wine had been stored, particularly older vintages. Minor pangs of disquiet arose. Throwing caution to the wind, I sent John my list and received his estimates within a couple of weeks.

John’s appraisal values for each wine contained three figures: the reserve bid, below which the wine would not be sold; the likely sale price, and; the top expected sale price. There was about a forty percent difference between the reserve bid and the top sale price. I had been diligently following wine auction prices in trade magazines such as the Wine Spectator and Decanter magazine. John’s estimates, even the top sale prices, were noticeably below those reported in these guides. But, being bereft of options I decided to proceed, figuring on average I would realize the median sale prices. So, I packed up my wine and delivered them, like lambs to slaughter, to the LCBO.

Here’s how the numbers worked at the LCBO auction. Let’s say the hammer price (sale price) of a given bottle of wine was $1,000. The seller would net an average of $840 with the remaining 16 percent going to the LCBO as commission for conducting the sale (including a one and a half percent insurance premium). The successful buyer would pay a 20 percent buyer premium plus Ontario sales tax and GST for a grand total of $1,322 (a $462 difference between what the buyer paid and the seller received. $360 went to the coffers of the LCBO and $102 to the two levels of government).

Once the LCBO received and confirmed that my little lovelies were worthy, they divided my 461 bottles into 61 logical lots. For example, six Australian wines would comprise a lot while five bottles from different vintages from the same producer would be a lot.

Finally, the fatal date arrived. But I couldn’t bear to attend and watch my treasures go through the heartless process.

So, how did it all turn out? Forty-five of my 61 lots sold (69 percent). Sixteen lots, almost a third, received nary a bid. Of those that did sell, 19 did so at the reserve bid or lowest price (42%) – one actually sold under the reserve bid. These 19 lots did not receive competitive bids. Only one lot (2%) sold above the average estimate; 98 percent sold below average estimate! In total, those wines that did sell realized $4,100 above the reserve bid. I was deeply disappointed. This was about a half of what I had hoped for!

Post script: It would seem that I wasn’t the only dissatisfied customer. The LCBO cancelled these auctions the following year. Wines in Niagara reported, “Quietly last week, Ontario’s booze monopoly finally threw in the towel over its glitzy rare and fine wine auctions and awarded the contract to an independent auction house — another case of letting private industry do a job that the LCBO couldn’t handle.” So much for Barry O’Brien’s world class wine auction. And, guess who that “independent” auction house was. Why none other than Waddington’s Fine Wine and Spirits Auctions. When the LCBO sent out its request for tenders, it included this proviso, “The respondent must have experience in conducting auctions of fine wine and spirits in Ontario.” Only two auction houses had such experience!

Whilst crafting this screed, I sipped on a glass or two of the brilliant 2016 Gigondas from Domaine Palon. It is currently available on LCBO.com for a mere $32.95 the bottle. I highly recommend it.

PPS: I invite you to visit my Arthur’s Cellar Wine Club homepage to find out all about the delicious wines from the Southern Rhône that we have on offer at LCBO.com.