I’ve just returned from a quick visit to the old country and been re-introduced to pasta for breakfast and discovered deep fried poached eggs. Weird but delicious.

Spaghetti carbonara has been a fave breakfast of mine for decades. I remember making it in my Notting Hill Gate flat back in the ’60s, when I had some left-over spaghetti from the night before. We’d probably had my go-to big group dish of ‘spag bol’ (spaghetti Bolognese to the uninitiated) and the cold left over pasta mixed well with bacon and eggs for hung over guests the next morning. There’s a very simple version in my original cookbook How to Eat Well and Stay Single, since it is a perfect bachelor dish. The penne carbonara version later in this article is better.

Carbonara can take many forms. On the first season of Market to Table, Nord Bistro Chef/Owner Bart Pocock introduced me to home made pasta and his delicious pappardelle carbonara. If I’d known how easy pasta was to make I’d have tried it long ago. I asked Santa (or anyone else who was listening) for a pasta maker, but still haven’t received one, so I’m still buying pasta, usually fresh. Papardelle was a wonderful base for carbonara, where the essence it to get as much sauce to stick to the pasta as possible, but a bit heavy for the morning.

When we were putting together the second season of the series, Chef Dan Frenette came up with a brilliant gnocchi carbonara, but that’s also a bit heavy for breakfast. Now I’ve been introduced to penne carbonara, and I think I prefer it to them all. 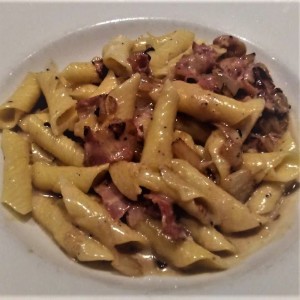 Carbonara has a murky history. Some think the word derives from ‘carbon’ and the Italian for charcoal maker, but that doesn’t make much sense. I prefer the explanation that it comes from the central Italy dialect word carbonada, meaning bacon. Carbonara with any sort of pasta is a post-war Roman dish, and since Italian cuisine doesn’t include bacon and eggs, it is thought to have been created following the Allied liberation in 1944, after the Brit and Yankee troops demanded bacon and egg for breakfast. The first mention in an English language cookbook was in the ’50s.

Original recipes don’t specify a particular type of hard cheese or pasta. Today, the preferred cheese is Pecorino Romano, although Parmigiano Reggiano is often substituted. I’ve found spaghetti is the most common pasta, but I’ve also had fettuccine, rigatoni and linguine. Authentically guanciale (smoked pork cheeks) or pancetta (salt cured pork belly) should be used, but in England it is always thick cut bacon. Another good substitute is French style lardons of smoked bacon. Back bacon doesn’t work. For the first time, I was recently offered penne carbonara and I think this pasta tube holds the sauce better than any of the others.

There’s been a carbonara debate raging in the media in the UK. Kitchen goddess Nigella Lawson proposed adding wine to her carbonara dish. Scandal! Food writer Stephen Harris admitted in The Daily Telegraph that he liked to scatter chopped parsley on top of his carbonara. Heresy! In Toronto, Chef Kurt Hospedales, who has long ruled over the kitchen at The Hot House in Toronto, adds cream. None of these hew to the authentic carbonara experience, but since this is a modern dish, I don’t see why change and improvements are necessarily bad. Anything that makes the dish more tasty should be encouraged. So, I’m going to eschew wine and cream and encourage chopped parsley in my own morning carbonara. 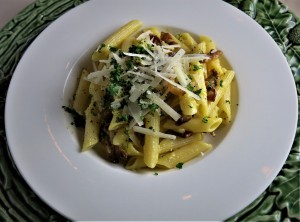 Meanwhile, another craze has appeared in England and I’ve been unable to track down its origin. Suffice to say, deep fried poached eggs first made their appearance in about 2015 and have continued to gain popularity. I haven’t heard a squeak about them on the North American side of the pond, so perhaps I’m the first to write about them here. Deep fried Mars bars have proven popular in Scotland. I’ve tasted deep fried pickles and deep fried mozzarella. Many other foods get deep fried, such as pizza, all of which which seems somewhat excessive. But these deep-fried egg offerings are surprisingly good. A little tricky to make until you master the art of poaching and equally good on a bed of spinach, a thick sliced grilled field tomato, asparagus spears or a bed of micro greens, this is a great addition to your breakfast repertoire.

In my research, I found that Scotch eggs – a soft or hard boiled egg surrounded by sausage meat, coated in breadcrumbs and deep fried – are claimed as an invention of the famous London food emporium Fortnum and Mason in 1738. But others say they originated in Whitby, Yorkshire, in the 19th century. So perhaps deep fried poached eggs are a Yorkshire derivation of the Scotch egg. Certainly, my Yorkshire friend, Carol, who used to run the village pub with her chef husband Graham, and now teaches culinary arts to budding cooks, was the first to bring this dish to my attention, and it is her recipe which follows.

Carol, this egg’s for you! 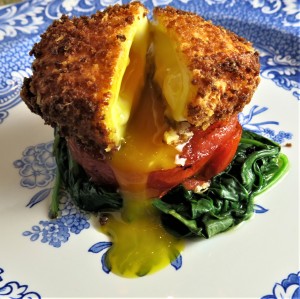 POSTSCRIPT: Watching Great British Menus on BBC, Chef Tommy Heaney produced deep fried poached duck eggs. He presented them on a rather messy bed of pancetta and beans, bacon foam,and pickled mushrooms, with a side of crispy toasted sourdough and decorated with nasturtium leaves. Of course, he was showing off for the judges and I would never go that for for an egg presentation, but the main idea holds, that eggs prepared in this manner are taking off! 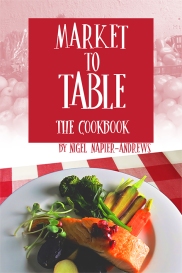 SHAMELESS PLUG FOR MY COOKBOOK: Since Bart used turkey eggs for his pappardelle carbonara, and Dan used duck eggs for his gnocchi carbonara on Market to Table, as soon as I’ve mastered deep frying poached hen’s eggs, and now inspired by Chef Heaney, I’m going to move onto other exotic eggs!

Recipes for their two dishes can be found in my Market to Table: The Cookbook, available on Amazon, i-Tunes and Lulu.com. Today’s recipes will, I’m sure, make their way into a future cookbook.