Yes, new research shows it’s true … men do fear veggies. Men choose meat over veggies every time. But as we move towards a more healthful regime. Some of us carnivores have to change our habits.

Personally, I spent the whole of my childhood hating veggies, and all those things I was forced to eat by wartime rationing and the rigors of British boarding school diets. Mind you, I didn’t care much for the thin slice of overdone beef on Sundays or the grey gruel-like consistency of “mince,” as any casserole made with ground beef was called. Sometimes, at my private school (called Public School in England with typical British contrariness) the cook deigned to produce a stew with bits of gristle in it, often described as Irish stew on the presumption that Irish peasantry would eat anything, and what was good for them was clearly good for the children of upper crust Brits who could afford the outrageous fees. That this gristle was occasionally attached to bones identifiable as left-over lamb chop, probably meant we were feasting on scrapings from the school staff plates. The house master and house staff ate with us, but at a raised head table where we could not see what they were served.

You’d think that would have been enough to put me off meat, but the veggies that went along with these meals were worse. Soggy parsnips, bitter swedes, dreadful turnips, ancient carrots, and tough old beets which bled all over everything else, were prime. Then there were ugly chunks of half-cooked onions, which I would not eat until well into my 20s, and waterlogged greens in great variety and in varying degrees of awfulness. Fortunately, when rescued by generous relatives, and occasionally by my own expat parents, for holidays, my diet and health improved immeasurably. My maternal grandmother was well versed in British staples, although she had an ancient cook to do most of the work during my childhood. Sunday roast was always superb and rotated between beef, lamb and pork, with lovely crisp roast potatoes, well-risen Yorkshire pudding with the beef, home-made mint sauce with the lamb and sweet apple sauce and crackling with the pork. All were awash in rich gravy. Once, when I was very sick with pneumonia, all I would eat was Grandma’s roast potatoes and gravy.

Normally I wouldn’t let a plate overwhelm the food

It wasn’t until I started cooking for myself, that I finally overcame my acute hatred of most veggies and actually started to like some of them. I still can’t look most root vegetables in the face, but I’ve come to love beets and carrots, as well as onions, as long as I’ve cooked them myself. Eating out, I will often pick them out of a meal. It’s taken almost 60 years to change my habits!

So it was with keen interest I read in The Daily Telegraph a week or so ago, that new research shows British men on the whole will pick a dish containing meat over an all-veggie one, when eating out, “for fear of being socially shunned.”

It goes on: “Scientists from the University of Southampton found even men who dislike meat or are unable to eat it for health reasons find it difficult to pick a vegetarian or vegan dish from a menu for fear of being ridiculed.

“A year-long research project found men had experienced ‘social isolation’ among friends after admitting to reducing their consumption of meat.”

Researchers concluded: “As evidence shows that eating less meat is vital to a more sustainable future food supply, unpicking this strong cultural association between men and meat is an important aspect to global food security research.” 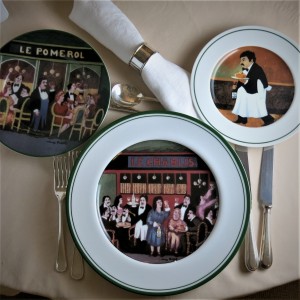 Frankly, I couldn’t give a toss about ‘global food security’ even if I knew what it meant. What I do care about is my health, and we now know that red meat, eaten frequently, is not good for heart health, and veggies, eaten frequently, are very good for every aspect of your health. Since we are all quite selfish when it comes to our food and our health, I suspect that any man eating less meat and more veggies is doing so entirely for personal and not societal reasons.

Once we learn that veggies taste good and a full meal doesn’t have to include meat, we are on the way to a more healthful future, and perhaps we will bring global food security along for the ride.

With those thoughts in mind, I’ve been giving vegetarian lunch and dinner meals to long suffering friends who will put up with being experimented on and tolerating the accompanying photo sessions. Their frank opinions determine what survives into the recipes I present here and what improvements or adjustments I make too.

One of the vegetarian books I’ve enjoyed reading, if not cooking from, has been Hugh Fearnley-Whittingstall’s River Cottage Veg (2013), and it is to this classic I’ve turned to for ideas this week. To make the meal less scary, I decided to use our amusing French-waiter themed plates designed by renowned artist Guy Buffet. 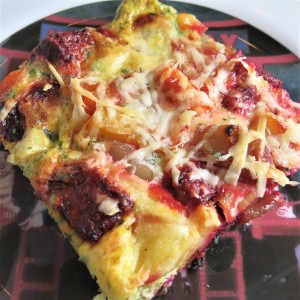 SHAMELESS PLUG FOR MY COOKBOOK: How about a copy of my e-book Market to Table: The Cookbook as a gift idea for yourself, friends, family or anyone who loves to cook? It’s available for an amazingly reasonable price on Lulu.com, i-Tunes and Amazon. If you click on the link to any of these online publishers you can preview the first chapter for free.