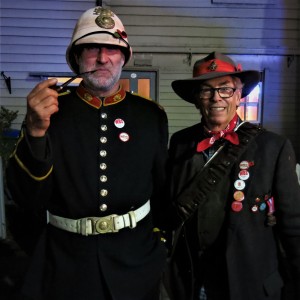 Oh what a night! Theresa got her head chopped off. Boris blowed-up good. The torch lit street processions were amazing. The bonfires huge. The fireworks brilliant.

This year I joined the ranks of Bonfire Boys (and girls) as a Boer kommando, promoted from my previous role as a smuggler, in England’s biggest Guy Fawkes’ Night celebrations in a little town in East Sussex.

Lewes, home to about 14 thousand citizens, swells by tens of thousands of visitors for this one spectacular night every year when we “Remember, remember, the fifth of November, gunpowder treason and plot.” Several Bonfire Societies gather their members for processions through the town, culminating in giant bonfires at their respective fire sites, followed by amazing firework displays. Flaming torches held high, blazing crosses leading, banners flying, the night felt positively mediaeval. As always, the best show was provided by our own Waterloo Bonfire Society.

Safety concerns cut the number of visitors to manageable quantities, plus the fact that this year the celebrations take place on a working Monday. An unnecessarily large police presence, including a half dozen in an armed squad, mostly keep in the background. Train services are cut off at dusk to prevent new arrivals. Cars are stopped at the town boundary. The streets are ours for the night. 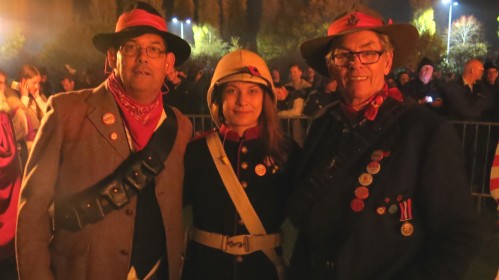 Nigel (R) with another Boer kommando and a “soldier”

In past years, Diane and I have joined the mob of smugglers in striped red and white Guernsey sweaters at the back of the procession, but this year I made a solo outing in a borrowed Boer War costume, along with local friends who invited me to join the ranks of Victorian Military marchers. My lapel was emblazoned with WBS badges and in memory of my late mum, I’m proud to wear her War Medal, along with her WW II Royal Sussex Regiment cap badge. At one point in the evening there is a brief ceremony at the Lewes War Memorial. In advance of Remembrance Sunday, we remember those who died in service to our country and the Allies in both World Wars. (I shall write more about that on November 11.)

At regular intervals in the processions, marching bands provide musical accompaniment and we are kept in fine order by marshals. There are several processions over the course of the evening and I have managed to march in two of them, my aching legs aided by a large flask of Famous Grouse blended Scotch whisky, tasty enough for a smoky evening. 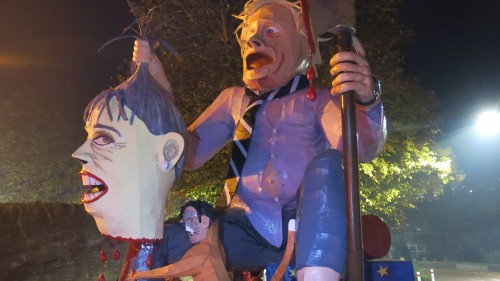 The centrepiece of the procession is a fantastic tableau, constructed in complete secrecy in a large building hidden in the countryside. The identity was unknown to all but the few who helped build it under the leadership of Captain of Tableau, Abbie, who outdid herself with creativity this year. She not only designed and supervised the building over several weeks, but also has the herculean chore of hauling the tableau through the streets. In this she is aided by several healthy and strong volunteers. Uphill they push hard from behind. Downhill they have to prevent the tableau from running away.

Heir apparent Boris, bedecked in his Eton tie, held a bloody axe in one hand and the severed head of failing PM Theresa held high in the other. A large tabby, representing wannabe Reese-Moggie stretches up to his knee. All this is destroyed at the firesite in a spectacular series of explosions. Months of hard work gone in an instant to the cheers of the crowd. At least Abbie has the satisfaction of seeing her tableau featured in The Guardian the next morning.

The order for the Waterloo Bonfire Society’s Grand Procession to the firesite is strictly laid out. It starts from our headquarters at 9:35 pm — “precisely” notes the programme. Led by the 1st Pioneer Chief and the Captain of the Tar Barrel and accompanied by two banners reading “The Tartar Emblem” and “Mongolians,” the 1st Pioneers are dressed in splendid costumes from the Mongolian Empire. In spite of the evening chill, many of the marchers have bare arms or bare legs. Tough lot to emulate, those Mongolians. They carry 17 blazing crosses to commemorate the 17 Lewes Martyrs, burned at the stake by Bloody Queen Mary. And they tow a blazing tar barrel. As the procession crosses the bridge over the River Ouse on the way to the firesite, the blazing barrel is cast into the water. What fun! How non PC!

Behind the tar barrel marches the Commander in Chief, followed by The High Society Marching Military Band, new to the procession this year. They are splendid in their smart military uniforms.  Of course, one of the tunes they play is Sussex by the Sea. Then comes a banner reading “God Save the Queen,”and the ceremonially dressed Lord Bishop of Waterloo, and his Clergy, who will later suffer an ignominious fate at the fire site. 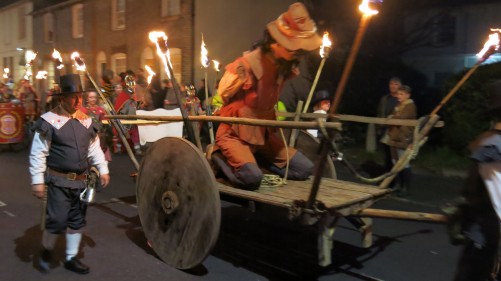 Next comes a grand effigy of Guy Fawkes, flanked on either side and in single file, by “several striking and most unique banners of the Conspirators,” who all went to the stake with Mr. Guido. Surrounding them are Ye Olde English Puritans. No sense of humour here. In a more jaunty mode, Romans and Greeks of the 2nd Pioneers follow, then a gaggle of ladies and gentlemen from the Tudor Period in the 3rd Pioneers. Now it is time for the Grand Tableau, which resonated well with the crowd. Neither Boris nor the PM seem very popular in the town.

The banner “Success to Waterloo Bonfire Boys” precedes our platoon of Victorian Military marchers. My friend Roger is dressed in a dark blue military uniform with a jaunty pith helmet. His energetic wife Liz is a Victorian nurse and I have given her my late mum’s WW II First Aid Nursing Yeomanry badge to wear in commemoration. We are followed by multi-costumed members is a variety of guises and then by many smugglers and a banner “Bonfire Boys Arms.” Many of the “boys” are girls. 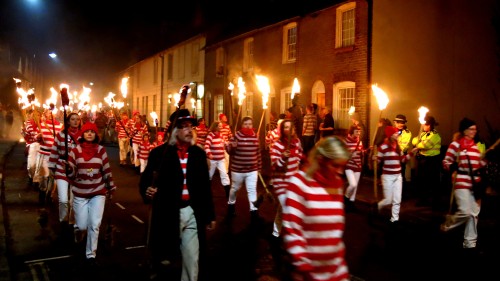 The band of TS Swiftsure follows, with blazing barrels bringing up the rear, hauled by worthy volunteers who pick up cast aside and nearly burned out torches. Thousands and thousands of the torches have been made by members over the autumn and dipped in kerosene the night before. They blaze away merrily for about 15 minutes, so each marcher usually has two or three unlit spares in the other hand.

Once we reach the fire site, where the giant bonfire has been lit in anticipation of our arrival, we proceed inside the barricades, while the public who have each paid £5 to attend stay a safe distance away. 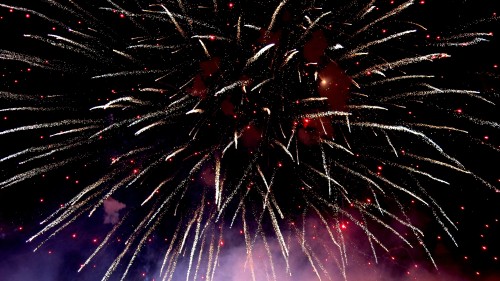 The cause of much noise is the Lord Bishop, who attempts to give a sermon. Knowing lads have positioned themselves in front of his stand and toss firecrackers at him until he gives up and retreats to safety. In spite of wearing some modern safety gear, the Bishop and his Clergy frequently suffer painful burns and injuries. But ’Elf and Safety are nowhere to be found!

As soon as the Clergy are dismissed, the Society’s superb and imposing Tableau of Boris and Teresa and Grand Effigy of Guy Fawkes (the programme notes: “…designed and built meticulously by the Society’s pyrotechnical team…”) are ceremoniously DESTROYED! Yes, it’s all great fun and the great and glorious are blown up. The crowd cheers, oohs and aahs, but this is just the beginning. For the next half hour or more, the sky is filled with “a Spectacular and Extravagant Finale of Aerial Fireworks.” The fireworks show is organised in sections, each louder and more fantastic than the last. Just as the smoke cleared and the crowd cheered what seemed to be the end of the show, another barrage of explosions lit the sky.

Roger, Liz and I and other friends watch from close range, warmed by the enormous bonfire.  The finale was loud, really loud. Then with the flames beginning to die down to a dull roar, most reassemble and return to our headquarters in the fifth procession of the evening. We limp along far behind with many rest stops since the final journey is all uphill.

As we plod home through the car-free streets, the hills around us resounding with the noisy firework displays of some of the other bonfire societies, the hilly Downs eerily illuminated by the light of their fires, we are already talking about what costumes we will wear next time. 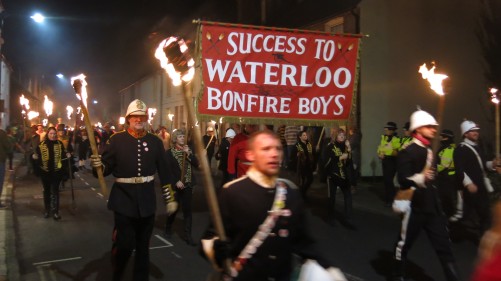