THEY SHALL GROW NOT OLD

World War I ended 100 years ago today and we are right to commemorate this centenary with solemn ceremonies.

In memory of my father
Acting Captain Kenneth Launcelot Napier-Andrews, RASC
21 March 1916 — 27 June 1996
Captured at Singapore and enslaved by the Japanese on the Burma Railway
1942 — 1945

In memory of my grandfather
Launcelot Leonard Napier-Andrews
1882 — 10 June 1944
Killed by a German bomb in Aldwych, London

In memory of my cousin

A solider killed in World War I

Peter Jackson has made a wonderful documentary entitled They shall not grow old, using WW I archival film from the Imperial War Museum, cleaned up, colourised and featuring actual voice recordings of veterans. In gory detail they describe their lives in the trenches and the resulting film might well be upsetting when it premiers in theatres this afternoon and on the BBC tonight. Copies have been sent to every high school in the land and a limited theatrical run is scheduled. I plan to see it today on the big screen and perhaps again on the small screen tonight.

As far as we know, only my cousin Reginald served in those dreadful WW I trenches. My maternal grandfather served in the Royal Naval Volunteer Reserve as a signalman, sending messages between the six great battleships on which he sailed. Each was eventually sunk by the German navy, but luckily he wasn’t aboard any of them at the time. My paternal grandfather was too old for WW II call up, but was killed by a German bomb in London. Apparently he was leaving his bank at the time and his wallet and ID were either stolen or destroyed, so it was a few days before he was identified, undoubtedly a very stressful time for my grandmother. My own father was already a POW by then, so didn’t find out his father had died until he was liberated. 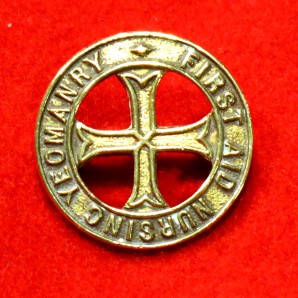 Mum’s F.A.N.Y. badge worn on Bonfire Night in honour of her service

Mum joined the F.A.N.Y.s as a volunteer and rose to the rank of sergeant. When war was declared, she first served with the 8th London, and then the 21st London Regiments and then the 4th Battalion, The Royal Sussex Regiment. During the Dunkirk evacuations, she worked to receive soldiers at a depot at Olympia: “I can smell them now,” she recalled of the gravely wounded men. “We’d been working for hours without rest or water and I stopped to put on some fresh lipstick. I was reprimanded by an officer and demoted from sergeant to corporal.” She was finally awarded the War Medal in November 2016. In her memory, I wore her medal and regimental badge and a friend dressed as a wartime nurse wore her F.A.N.Y. badge at a Remembrance service this week.

When WW I ended, mum was one year old. Last year she celebrated her 100th birthday,  got her letter from the Queen and was happy with that milestone. I fully expected her to reach her 101st birthday a month ago, but it was not to be. Instead our family scattered her ashes in the English Channel, as she wished, on what would have been her birthday. We drank champagne and toasted her memory. A fitting conclusion to a very full life.

In memory of all my wonderful family members who served their country, I’ll repeat the poem I first quoted in We will remember them in 2014:

They shall grow not old, as we that are left grow old:
Age shall not weary them, nor the years condemn.
At the going down of the sun and in the morning,
We will remember them.

Featured image: Poppies in a Yorkshire field –Photoshop enhanced image from a photograph by Nigel Napier-Andrews

Tagged as: Burma Railway, Dunkirk, FANY, For the fallen, Laurence Binyon, Lush Napier-Andrews, Peter Jackson, RASC, RNVR, Royal Sussex Regiment, They shall grow not old, They shall not grow old film, We will remember them, WW1, WW2