A CHILD’S CHRISTMAS IN WALES

Has is snowed at your house? Will you have a wonderful white Christmas?

Christmas is a time to build happy memories. I remember, as a child, hearing the rich voice of Richard Burton reading Dylan Thomas’s magical imagined Christmas story of a childhood in Wales. Later there was a television version.

Welsh poet Dylan Thomas made a memorable recording just before he died in New York in 1953. Legend has it that he arrived at the studio without a full script and cobbled the story together on-site from other shorter pieces he had broadcast earlier on BBC. When I posted this story in 2012, there was a link to an audio version of this 1952 20-minute recording of A Child’s Christmas in Wales. Sadly, I cannot resuscitate the link. However, it is available on iTunes. 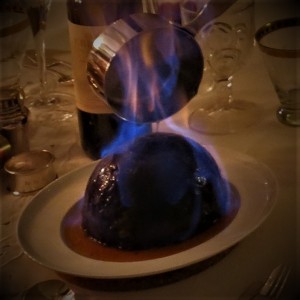 Instead, I’ll offer a quote from my favourite paragraph in the story.

“For dinner we had turkey and blazing pudding, and after dinner the Uncles sat in front of the fire, loosened all buttons, put their large moist hands over their watch chains, groaned a little and slept. Mothers, aunts and sisters scuttled to and fro, bearing tureens. Aunt Bessie, who had already been frightened, twice, by a clock-work mouse, whimpered at the sideboard and had some elderberry wine. The dog was sick. Auntie Dosie had to have three aspirins, but Auntie Hannah, who liked port, stood in the middle of the snowbound back yard, singing like a big-bosomed thrush. I would blow up balloons to see how big they would blow up to; and, then when they burst, which they all did, the Uncles jumped and rumbled. In the rich and heavy afternoon, the Uncles breathing like dolphins and the snow descending, I would sit among festoons and Chinese lanterns and nibble dates and try to make a model man-o’-war, following the Instructions for Little Engineers, and produce what might be mistaken for a sea-going tramcar.”

Have a very Merry Christmas.

A scene from the 1963 television broadcast (courtesy BBC)