It was the spring of 1988. Our wine scribe Jim Walker and his merry band of topers had embarked on a wine aficionado’s dream visit to Bordeaux, France. On the fourth day they found themselves in the Bordeaux appellation of Saint-Julien where they toured Château Ducru-Beaucaillou and enjoyed a splendid lunch there with its owners, the Borie family.

Our fourth day (see the last three Gentleman’s Portion wine posts for all the joyous details of our first three days) in vinous heaven began with a change of base camp. Early morning we moved from the lovely old hotel located in the heart of the city of Bordeaux to Château Beaumont which would serve as ground zero for the remainder of our stay. 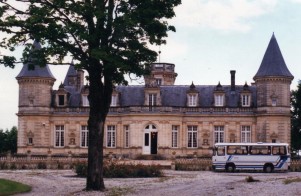 Located on the left bank of the Gironde River between the communes of Margaux and Saint-Julien, Château Beaumont is a top tier Médoc Crus Bourgeois wine producer. La Garantie Mutuelle des Fonctionnaires Societe d’assurance mutuelle (GMF) and the Japanese group Suntory Beverage & Food Limited joined forces in 1986 to form the company Grands Millésimes de France, (also owners of Château Beychevelle and the Bordeaux merchant Barrière Frères) and became the 12th owners of the estate. One of the new company’s first initiatives was to completely restore the chateau. Our band of intrepid imbibers became its inaugural guests.

After settling in to our ducal digs at Château Beaumont, (Hélène and I comfortably ensconced in the chamber above the front door), we motored the short distance to Château Ducru-Beaucaillou in the Saint-Julien appellation for a tour, tasting and lunch with its owners, the Bories.

Appellations of the Médoc

Saint-Julien is one of the five major Bordeaux right bank red wine appellations, the others being Saint-Estèphe, Pauillac, Margaux and Pessac-Léognan. It is also the smallest, but don’t let its size fool you. It has the highest proportion of classified estates of all the regions in Bordeaux. These 11 classed growths account for nearly 80 per cent of the entire region’s wine production. It also tends to be my favourite of all the Bordeaux areas (along with Pauillac). My old pal Hugh Oddie says this is because its wines tend to be the sweetest. He might just be right.

We soon arrived at our destination. Holy mackinaw! What lay before us wasn’t a chateau but a friggin’ palace. A broad stone staircase led us up to the front doors where Jean-Eugène Borie awaited. One immediately took a liking to this elegant gentleman. He was warm, gracious and hospitable with an infectious twinkle in his eye.

Jean-Eugène was one of just a few resident proprietors of the Bordeaux Grand Cru Classé wineries having taken over administration of the estate from his father, François Borie in 1953. François had purchased the property in 1941. The Bories had moved to Bordeaux in the late 1800’s and started out as negociants (negociants are wine merchants who buy grapes, juice, or finished wine from growers, then bottle and sell them on the wholesale market). The property was producing wine grapes as far back as 1720 when it was owned by the Bergeron family. Bertrand Ducru purchased it in 1795, hence the first part of winery’s name. Beaucaillou in French means beautiful pebble. The Garonne River deposited them all over the terrain about two million years ago.

Jean-Eugène proceeded to take us on a tour of the chateau’s public rooms (magnificent) and then to the wine-making facilities underneath where we viewed the holding tanks and oak barrels where past vintages of Ducru-Beaucaillou rested and slowly matured for future consumers. And, oh that wonderful aroma. I have always loved the sweet, oaky, winey smells that emanate from first quality wineries. Ducru-Beaucaillou is crafted from 70 per cent Cabernet Sauvignon and 30 per cent Merlot which helps to explain the characteristic finesse and elegance of the wine. Most critics agree that it merits the label Super Second, wines classified in the official Bordeaux Classification of 1855 as second tier but deserving elevation to the top rank.

Then came the best part – the tasting. Jean-Eugène had us sample some of the older vintages of not only Ducru Beaucaillou, but also of Chateau Grand-Puy-Lacoste and Chateau Haut-Batailley, both from the Pauillac AOC, which the family also owned. It was a tasting that would have made Bacchus himself green with envy.

We then returned to a large reception area where we met other members of the family – Jean-Eugene’s wife Monique, their son François-Xavier and his wife Marie-Hélène. François Xavier and Marie-Hélène were the proprietors and residents of Chateau Grand-Puy-Lacoste which Jean-Eugène acquired in 1978. We learned that they had completely restored the chateau, rejuvenated the vineyards and modernized the winemaking operations.

While we were chatting we were served a chilled amber-coloured apéritif in a wine glass with an orange peel as adornment. We learned that it was called Lillet and that Jean-Eugéne and Monique’s other son Bruno (they also had a daughter Sabine who was also very much involved in the Bordeaux wine business) owned and managed the tasty little devil. Lillet is a blend of 85 per cent Semillon grapes and 15 per cent macerated liqueurs (peels of sweet oranges from Spain and Morocco and of bitter green oranges from Haiti). The mix is then stirred in oak vats until blended. Lillet is treated during the aging process just like most Bordeaux wines (undergoing fining, racking and filtering). Hélène loves the stuff. You can try some for yourself; it is available at the LCBO for just $19.25 the bottle.

The Lillet having been polished off and greatly enjoyed, we all repaired to the formal dining room resplendent with flowers, gleaming silverware and stemware and white linen where wonderful aromas wafted invitingly in the air. The formality of the setting was more than offset by the spirited and convivial conversation and the graciousness of our hosts. Our lunch was a veritable cornucopia of delicious courses and matching wines.

As we were enjoying a perfectly cooked gigot d’agneau with all the trimmings, I noticed Jean-Eugène rise and go to a sideboard where he carefully selected what was clearly an antique crystal decanter filled with a dark ruby/purple liquid. He carefully returned with it to the table and poured each of us a small portion in fresh wine glasses. I took up my glass, gave the liquid a gentle swirl and took a long deep breath. Sheer ambrosia! Aromas of blueberries, raspberries, currants, toasty oak and cigar box sprung from the glass. I took a sip. It was rich and sweet (there you go, Hugh) with gentle tannins and acidity and a long velvety finish. I looked up and caught Jean-Eugène smiling at me. 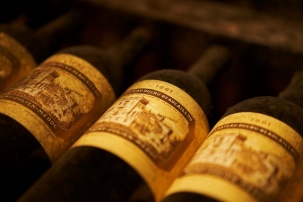 “Is it a 1961 Ducru-Beaucaillou?” I whispered reverently? He nodded. In his book Bordeaux, A Consumer’s Guide to the World’s Finest Wines, Robert M. Parker, Jr. opined, “Probably the greatest Ducru-Beaucaillou I ever tasted was the 1961.”

The 1988 Calgary Winter Olympics had taken place just a few months before our Bordeaux visit. The ever resourceful Arnaud Ratel suggested that we bring an array of these Olympic Coins along with us to France to serve as thank you gifts for our various hosts that we encountered during the tour. We presented some of them at the end of our fabulous get together with the Bories. I explained to them that since they so kindly shared the fruits of their labours with us, it was only reasonable that I do likewise. You see, at the time I was a banker. They were clearly delighted.

And so ended a day to be truly cherished. The Bories were a family every bit as elegant, refined and charming as their wines. A great deal has transpired since our privileged encounter. Sadly, Jean-Eugène passed away in 1998. Xavier continued to oversee the estate until 2003. Bruno then moved in and took over. He continues to deftly manage it to this day. In fact, if anything, the Château Ducru-Beaucaillou wines have become even better under his stewardship. Xavier and Marie-Hélène, along with their daughter Emeline, have focused their energies at their home, Château Grand-Puy-Lacoste, a Fifth Growth Pauillac. They have done a stellar job.

There is none of the remarkable Château Ducru-Beaucaillou currently available at the LCBO, but a little while ago you could have snapped up a bottle of the 2009 vintage for a mere bag of shells: $795. The 2012 vintage of Château Grand-Puy-Lacoste also appeared at the LCBO, for $108 a bottle, but alas there is no more. I have no doubt that more recent editions of both will soon find their way onto the shelves of Ontario’s booze emporium.

PS: I invite you to visit our Arthur Sellers & Company homepage to find out what is happening at Arthur’s Cellar Wine Club.