Returning to Edinburgh after many decades of absence has been a very pleasant experience under unexpectedly sunny skies.

The day we arrived we were told it had been raining hard for several days, and miserable, but for the whole of our brief stay we rejoiced in brilliant sunshine.

I was last in the city as a callow youth, and only there briefly to pick up some warm long woolly underwear from Woolworths. I was a guest of one of those draughty stately homes in the wild Border country. My girlfriend’s parents were hospitable, but had long ago turned off the central heating, and closed off the wings in the substantial property. My hostess suggested if I was cold in the night I should just whistle for another dog to jump on the bed to keep me warm. Fortunately, my girlfriend and I had other plans. However, the woollies were essential for daytime survival, hence our expedition.

My only memory of the city was that it was cold, grey and wet. We stopped for tea at a Lyons Corner House and asked for cake. Cake was off, the elderly Scottish waitress intoned, but said we could have some “gatoo.” In true Scots style, I turned my nose up at Frenchified gateau. That was then.

Our luxury hotel in a row of Georgian townhouses

A very dear friend in Toronto is lucky enough to have business in Edinburgh several times a year, and since our other notion of a few days away from our Yorkshire base was Paris (and thank goodness we didn’t go with gilets jaunes and the devastating fire at Notre Dame making life difficult for tourists), we decided Scotland seemed like a good idea.

Since he always stays at the Hotel Principal in the Georgian New Town with its rows of carefully planned streets, we booked into the same. What an excellent choice. Just before our arrival, the hotel was rebranded as the Kimpton Charlotte Square, but the legendary good service was if anything enhanced. The hotel is built into a row of charming townhouses around an inner courtyard. Our only surprise was the casual dress of the staff, making it sometimes difficult to distinguish guests from employees. We met our friend in the conservatory bar, drank several gentleman’s portions of whisky, and floated off to a tiny but excellent restaurant for dinner. The Grain Store is in the Old Town, just below Edinburgh Castle. On the steep and narrow Victoria Street retail shops occupy the ground floor and the restaurant is approached up some utilitarian steel steps. The cosy interior only seats a few diners, but they are a jolly crowd on the evening of our visit, and the food was perfection. 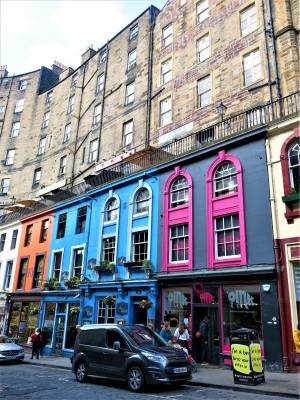 The many levels in the Old Town

We visit the street for shopping a day later and are surprised to see that above the second floor restaurant there is another street, with a further six storeys of building rising above that. So it is all over the old town, where the world’s first high-rises were built. In the basement of The Real Mary King’s Close, off The Royal Mile, there’s a spooky underground tour of a whole multi-storey city hidden below ground and walled off during a plague outbreak. The ‘new’ old city rose above those hidden streets.

Without doubt, our visit to The Royal Yacht Britannia was the highlight of our trip, as I reported in my last story: Stop All The Clocks. We spent a couple of hours there but could have easily taken double the time to explore every corner of the fascinating and historic ship.

In a four day visit, it is impossible to see everything Edinburgh has to offer. In August every year, the Edinburgh Festival swells the half-million population many fold. Thousands more book a year ahead for grandstand seats at the stirring spectacle of the Edinburgh Tattoo, featuring massed bands of pipes and drums, among many other participants. Speaking of pipes, it is almost impossible to get away from the sound of bagpipes in the tourist crammed streets. Pipers in full Scottish dress uniform are to be found at most street corners. For just a pound, they suggest, you can take a selfie with them. 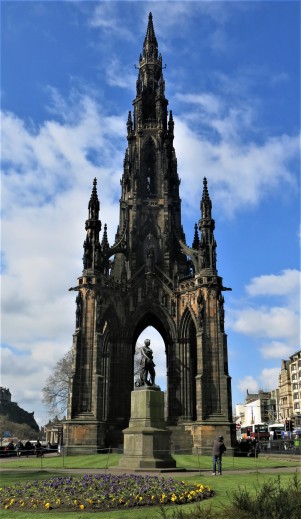 The Scott Monument with the Livingstone statue foreground on Princes Street

With limited time at our disposal, we first took a tour on a hop-on-hop-off bus. There are three lines, covering different parts of the city. The red and blue lines have pre-recorded commentaries, while the green line has a live (English only) commentator. The benefit of the latter is that they are always in sync with the passing scenery and have an extra supply of light-hearted anecdotes to share. The blue line is the only one that passes Britannia. They start from the Waverley Train Station, but tickets can be bought on board at any stop, and brochures showing their different routes are available everywhere. Having had a quick overview of where everything is located, over the next three days we retraced our steps to what seemed the most interesting venues.

Apart from details of the many sights we passed, I learned the Old Town is hilly with twisty streets and the New Town was laid out in the Georgian era in a grid system on flat farmland. So be prepared to get puffed out wandering through the former and have an easier time in the latter, where royally named Princes Street, George Street and Queen Street intersect with Frederick Street, Hanover Street and Castle Street. In a few blocks you can find dozens of shops selling Scottish souvenirs and tartan tat, all the respectable clothing brands, including six Jermyn Street men’s shirt shops, and all the usual High Street shops. Rose Street abounds with pubs and eateries. On the Royal Mile and adjacent side streets in the Old Town, tartan, cashmere and Harris Tweed shops fight for space with more tourist shops and restaurants of every kind. Even with the plethora of eating places, on Friday and weekend evenings it is advisable to reserve. Apparently the locals like to drink and dine out.

Towering over all is the dramatic presence of Edinburgh Castle, built on an ancient volcanic plug. Sheer cliffs on the north and south make it impregnable, although attackers have made night time attempts up the steep western ascent. Most of the castle’s defences face the easier slope up from the town, with a series of gates protecting the summit. In the past the castle has been pummelled from here. Buying your tickets in advance ensures quick access, but even on a busy day we only had to wait in line about 20 minutes. To us it made sense to first climb the steep path to the top and then see the various sights on the easier way down. Unfortunately, it seemed that everyone else had the same idea and most of the exhibits had long waiting lines outside.

However, the views from the The Upper Ward on the highest part of Castle Rock, and accessed through a late 17th-century gate, are sublime. To the east one can see the massive peak named Arthur’s Seat, in another the various segments of the city, with spires and buildings rising up in every direction. From one battlement, I peer down onto an old dog cemetery, where mascots and officers’ animals were buried. From another I can see Mons Meg, the massive siege gun gifted to the castle in 1457. The stone cannon balls it fired could travel up to two kilometres, but it has not been fired since 1681, when the barrel burst during a salute to King James VII (of Scotland ) and II (of England) on his arrival in the city.

The Stone of Scone, returned from England in 1996, and the Crown of Scotland, rediscovered by Sir Walter Scott in a sealed-off room in 1818, are on display, but the line-up was so long we gave them a pass. I was amused to hear a guide tell a large group of bemused Japanese tourists, that the question he was most often asked was: “What time does the one o’clock gun get fired?” There was no reaction when the joke was translated. The present gun was brought into service in 2001. It fired as we were leaving and it is loud, very loud. Its historic purpose was to act as a timekeeper for the city and the ships in the nearby Port of Leith.

Ancient Isle of Lewis chessmen in the museum

Down the Royal Mile, we were only steps from the National Museum of Scotland, formed in 2006 with the amalgamation of the Museum of Scotland and the Royal Museum. Admission is free. Once again we started at the top, where a roof terrace gives excellent views all around. On subsequent floors we learned interesting details of Scottish history and saw intriguing artefacts, including a full size colliery steam train, perfectly carved ivory chess pieces from the Isle of Lewis and a spooky marble likeness of the executed Mary, Queen of Scots, whose story was told in the recent film starring Saoirse Ronan and Margot Robbie. By the third floor we were replete and had to stop for tea at the café and by the ground floor we did not have the energy to examine the other half of the museum which features a wider agenda.

Later, we retraced our steps up the Royal Mile, to another Edinburgh institution for dinner. The Cannonball Restaurant is right under the shadow of the Castle and it is alleged that the cannonball stuck high up in the outside wall is left over from one of the many siege attempts. However, admits our server, it is more likely a surveyor’s mark, used to square off the walls when the building was originally erected as a school. It’s a good story and we had a good meal. As always, my review is on Trip Advisor.

On our final day we spent a lazy morning shopping before heading for the station and our excellent LNER train back to Yorkshire, on a service thankfully no longer run by the bearded billionaire balloonist (as The Spectator names him), who has had his Virgin Trains franchise revoked.