In part one of this two-part series, my wife Gail and I boarded the Silver Galapagos expedition ship in Baltra, and began our seven-night cruise through the Galapagos Islands by sailing to Darwin Bay on Genovesa Island. In part 2, we continue our voyage of discovery in the Galapagos, 97 per cent of which is a National Park surrounded by one of the largest marine reserves in the world, where we encounter Blue-Footed Boobies, Magnificent Frigate Birds, iguanas, giant tortoises and other incredible wildlife.

After a light breakfast, we boarded a Zodiac and motored towards Seymour Norte where we were decanted onto a small patch of lava rocks to begin a two-kilometre hike along the beach and into the interior of the island.  Once again, local wildlife seemed oblivious to our presence as we stepped around baby sea lions and iguanas in our path, and past dozens of nesting birds just two arm lengths away.

Seymour Norte is home to one of the largest nesting grounds in the world for Blue-footed Boobies and Magnificent Frigate Birds, and we saw the latter’s mating ritual where the males puff up their bright-red gular pouch to attract females. The Boobies are excellent hunters, while the frigates are more like pirates because they usually chase the boobies who have caught fish in order to steal their prey.

The island also hosts a large colony of Galapagos Land Iguanas, the dragon-like creatures with clawed feet and spiky dorsal crests that run along their neck and back. Many of the mature iguanas we saw were quite large – over 1 metre long – with some weighing as much as 13 kilograms. However, unlike their mythical ancestors, these miniature “dragons” are mainly docile herbivores.

We also spotted a large colony of marine iguanas, which are the only ocean-going iguanas in the world and unique to the Galapagos Islands. Over the past several million years, theses iguanas have adapted from landlubbers into sea-going reptiles, becoming remarkably powerful swimmers in the process.

Marine iguanas have smashed-in faces and razor-sharp teeth that allow them to chew the algae off rocks, which stops the algae from growing out of control and degrading the local marine environment. They also have special glands that clean their blood of excess salt they ingest, which they expel through their nostrils, giving them a salt-encrusted head. It’s not surprising then that Charles Darwin once described these iguanas as “hideous-looking” and “most disgusting, clumsy lizards.”

After 90 minutes, we rushed back to the ship so that I could put my wetsuit on and get ready for the first snorkeling excursion of the day. While I had been given a wetsuit during our first day at sea, I hadn’t bothered to try it on to see if it fit until now. Unfortunately It was very tight, and I didn’t have enough time to swap it for a bigger one as our tour was about to depart. So I took off my bathing suit, lathered up with greasy sun tan lotion, and barely managed to slide the neoprene suit over my naked body and up to my shoulders.

Mission accomplished, I boarded a Zodiac with a dozen shipmates and motored a few hundred metres off-shore to start our snorkeling adventure.  The large swells were a bit unsettling, but the water visibility was good and I was able to spot lots of brightly coloured tropical fish, several reef sharks and two Pacific Green Sea turtles that came so close to me we almost collided! 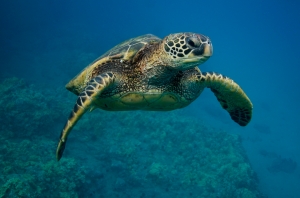 After 60 minutes, we were taken back to the ship’s snorkeling equipment area outside on Deck 3 where we were asked to take off our wet suits and hang them up to be washed. As each person in front of me peeled off their suit, I could see that everyone had a bathing suit on underneath — except me!  I waited for just the right moment when the crew was pre-occupied helping others and made a dash for the door so I could return to my cabin and disrobe in privacy. I was just a few feet from the door when I felt a hand on my shoulder and someone say “Sir, can I help you take your wet suit off?”

A few people were now looking at me wondering why I was trying to escape without taking my salty wetsuit off.  In desperation I said “I have to go to the washroom.”

“That’s okay,” the crew member said as he pointed around the corner, “We have one right here.”

“No, no,” I responded, “I have to use the one in my cabin. It’s the only one I can use!” I then cupped my hand to his ear, told him in a whisper that I was completely naked under my wetsuit, and ran up the stairs and down the hallway to my cabin!

We spent the rest of the afternoon on our balcony sipping some crisp white wine to ease my embarrassment, and then went to the lounge to hear the guides give their nightly lecture on an interesting aspect of the Galapagos, followed by the excursion teams briefing on our next port of call. While it was difficult after an active day to sum up sufficient energy to attend these lectures, they provided lots of interesting background about our destination and were well worth the effort.

We woke early the next day off the coast of Rabida, where a Zodiac took us ashore and decanted us in a few feet of surf just off a beach with red-coloured sand, caused by the island’s high volcanic iron content.  We were immediately greeted by a large colony of sea lions that happily posed for photos.  We then continued along the beach where we stumbled upon a brightly coloured orange starfish in the sand. 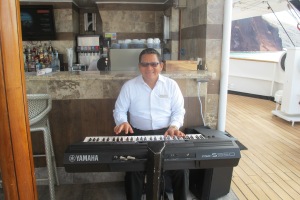 Braulio performs at the Outdoor Grill

Our guide then took us inland along a trail lined with Cactus and Palo Santo trees where we came across the Galapagos Mockingbird, and several of Charles Darwin’s famous Finches – in fact, Rabida is the only island where nine varieties of Darwin finches can be found.  And then we descended down the trail and into a lagoon where we saw some native pink flamingos, which feed on the larvae of the local pink shrimp, which gives them their deep pink colouring.

After touring the island, we returned to the Silver Galapagos for lunch at the Outdoor Grill where we feasted on barbecued Red Snapper prepared Ecuadorian style, while being serenaded by the ship’s piano player, Braulio.

The next morning we arrived at Puerto Baquerizo Moreno, a small town on the island of San Cristobal – one of only four inhabited islands in the Galapagos — where Darwin first went ashore 1835. The island is also the home of the La Galapaguera Giant Tortoise Breeding Center at Cerro Colorado. 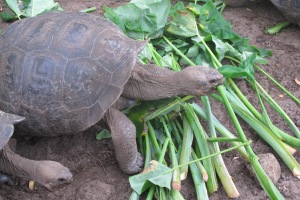 The giant tortoise, which is found almost nowhere else in the world, is the poster child of the Galapagos probably because the islands took their name from this huge reptile (galapago), which is the Spanish word for tortoise. They are the world’s largest tortoises with some greater than 1.5 meters in length and weighing an average of 227 kilograms, and have a natural life span of more than 100 years.

The breeding center exists because the Giant Tortoises were near to extinction in the 1950s due to over hunting and competition for food from non-native species introduced to the local environment.  Today, the centre is helping to restore the local giant tortoise population hatching baby tortoises and caring for them until they are old enough to be released into their natural habitat – usually two years from birth.

Our tour guide took us along a trail, stopping to explain each stage of the breeding and development process, and showing us the various enclosures which hold the giant reptiles until they are five-years old. He then took us to where the more mature tortoises come to graze on stalks of green plants that the staff cut and carry to designated feeding zones.

Sea Lions on the sidewalk

While these gentle herbivores amble along at a painfully slow 0.16 miles per hour (0.26 kilometers per hour), you don’t want to get in their path when they are heading to a feeding zone at meal time. My wife Gail accidentally did, and she was rammed from behind by a giant tortoise that tried to slip between her legs (it missed) as it was racing to get to the feast before the best greens were eaten. The episode left Gail with a bruise on her calf and a new appreciation of the danger posed by a hungry giant tortoise!

After finishing our tour of the breeding center, we returned to Puerto Baquerizo Moreno and strolled down the main road where we discovered a baby sea lion with its mother lying on the sidewalk, clearly oblivious to the humans walking by them. But these pair of cheeky sea lions were trumped by a relative at the pier, who we found taking up an entire bench normally used by passengers like us while waiting for a tender back to the ship!

The next day our ship called at Espanola, where we saw the only raptor that breeds in the islands – the Galapagos Hawk. Then we pulled up anchor and headed to Santa Cruz Island, where we spent our final night aboard the Silver Galapagos before flying back to the port city of Guayaquil on the Ecuadorian mainland.

We had just spent seven days exploring one of the world’s most isolated and unspoiled national parks and marine reserves, and enjoyed amazing encounters with rare and beautiful wildlife. When we first set out on this adventure we weren’t sure that a full week of daily encounters with rare birds and reptiles would keep our interest. But on our last night as we sat in the lounge watching a video of our trip filmed by the ship’s photographer Jorge Prigann, we wondered why we hadn’t booked one of the longer 14-day voyages.

(There are a number of ways to tour the Galapagos Islands, including by cruise ship or by land combined with daily boat excursions. Cruise ships in this area can be expensive (US$800 to $1,200 per person per day), but they usually come with all meals, some alcohol, and free guided excursions. Staying in a hotel on San Cristobal or Santa Cruz can be cheaper, and allows you to explore on local excursion boats when and where you wish.)