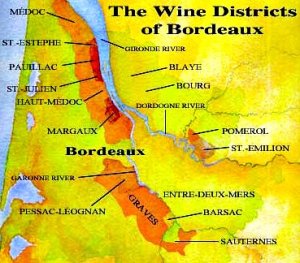 Back in the late spring of 1988 our wine scribe Jim Walker, his wife Hélène and several friends spent a week drinking their way around the finest watering holes in Bordeaux, France. Join them now as they visit one of the very best … and sweetest.

We had completed an amazing morning of tasting at Château La Mission Haut-Brion and Château Haut-Brion (O! Bordeaux – Gravitas in Graves has all the scrumptious details) and then headed a few kilometres up the Garonne River to the village of Sauternes and our luncheon destination, Auberge les Vignes. But, before we get to lunch, let me tell you a bit about Sauternes and its noble rot. 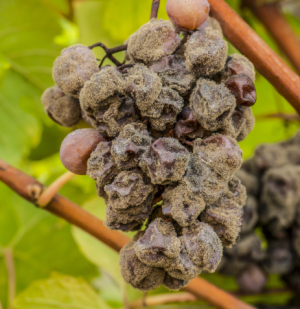 Sauternes, along with its neighbouring appellation Barsac, is renowned for its absolutely delicious, ethereal, sweet white wines. Now then, they aren’t sweet because the vintners there load them up with sugar. No, it’s the result of a parasitic, funky fungus scientifically called Botrytis cinerea, (ashen bunch of grapes in English), but better known a little more prosaically as “noble rot.” It thrives under certain climatic conditions, particularly the misty, foggy, humid, mild mornings of early fall. Then the sunny, dry afternoons encourage its growth. The noble rot attacks each ripe, mature grape individually, devouring the skin and sending its root-like filaments deep inside to feed on the grape’s acids and sugar (reducing the sugar content by up to a third and the tartaric acid by five-sixths), killing the grape in the process. It also feeds on the water in the grape which is further reduced due to evaporation through the punctured skin. The rot also causes a number of chemical reactions within the grape, but I fear that I have already been overly technical to prattle on. Suffice it to say that it all adds up to highly concentrated juice that yields a magical taste.

Now then, producing top-notch Sauternes is no easy, or inexpensive, matter. First, Mother Nature has to deliver the ideal conditions for the development and proliferation of the noble rot, something that occurs roughly three years out of every decade. At the same time, she mustn’t inflict the vineyards with her many forms of nastiness like hail, autumn frost and excessive rainfall. Then, because each individual grape reaches its ideal level of rottenness on its own schedule, the moldering little devils must be picked by hand and at different times. It is not uncommon for the pickers to pass through the vineyards on as many as six different days (up to thirteen times at Château d’Yquem). If you could find the pickers, imagine the cost. And to compound the Sauternes vintners’ financial challenges, sweet wines have fallen out of favour with today’s waistline conscious consumers with a preference for dryer wines. As a result, many producers in Sauternes are now producing dry white wines from the local Sémillon, Sauvignon Blanc and Muscadelle grapes in addition to the sweet nectar. Château d’Yquem’s version is called ‘Y’ or ‘Ygrec.’ 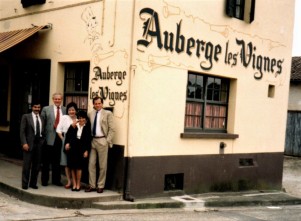 Your intrepid imbibers posing before lunch

And then it was time for lunch. We had arrived at the unprepossessing Auberge les Vignes located in the heart of the village of Sauternes. The interior wasn’t much more enticing; best described as dark, drab, dreary and rustic. As we settled in at our table with its red and white checkered tablecloth, it became quickly evident that we were the only patrons. None of this was auguring well. But, things did smell awfully good. A jovial fellow in a blue plaid shirt and jeans emerged from the kitchen and warmly greeted us. He was the owner and it turned out that he was from Quebec (Nora, Arnaud, Hélène and I lived in Montreal at the time). The unpretentious meals that he prepared for us, with the meat grilled over an open fire, were absolutely delicious as were the accompanying wines. It turned out to be one of our favourite meals during our entire invasion of Bordeaux. Lesson learned … one shouldn’t judge a book by its cover or a restaurant by its appearance. 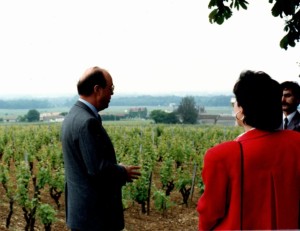 It was just a short ride to Château d’Yquem. We were practically giddy with anticipation. After all, this was one of the most highly regarded wineries in the world. The definitive 1855 classification of the wines of Sauternes and Barsac designated 26 classified growths. But, just one of them was deemed to be premier cru supérieur – Château d’Yquem. The noted wine critic Robert M. Parker, Jr. noted in his book Bordeaux: “Yquem, despite the existence of other outstanding estates, rarely has any competition and must be considered to be the only Bordeaux wine in a class by itself.”

The Yquem property was highly regarded as far back as the Middle Ages when King Edward IV ruled both England and Aquitaine. Jacques Sauvage was given feudal tenure over d’Yquem in 1593 and shortly thereafter built the chateau that stands to this day. Later on, the Sauvage family tore up all the red grape vines and replaced them with white. Francoise Josephine de Sauvage d’Yquem married Count Louis-Amédée de Lur Saluces in 1785 and the estate remained in the Lur Saluce family till the time of our visit. The family owned Château de Fargues, another superb Sauternes estate, for three hundred years before acquiring Yquem. It is yummy and a bit of a bargain, if you can find it.

The Comte with his treasures and us

It was Le Comte Alexandre de Lur Saluces who greeted us when we arrived and took us on a tour of the estate. Le Comte was a very serious, hospitable gentleman who took obvious pride in Yquem and its long, delicious history. He explained that the 280 acre estate was planted 80 per cent Semillon and 20 per cent Sauvignon Blanc and that the vines maintained an average age of about 25 years and are replaced before reaching 50 years. There are over 100 kilometres of pipes that drain most of the property. And, the yield is very low; it takes all of the fruit from one vine to make a single glass of the ethereal elixir. By the way, Richard Olney wrote a wonderful book–Yquem–that I think readers would thoroughly enjoy.

Our tour continued into the cellars where barrel after barrel lay resting, biding their time for three years before their contents were bottled and sent to delighted, wealthy connoisseurs around the globe. They need to be wealthy. The LCBO recently offered single 375 ml bottles of the 1999 vintage for $369, magnums of the 2005 for $2,299. 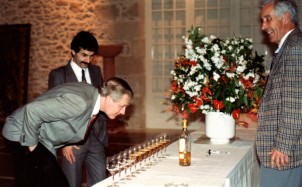 Bowing before the maestro and his sticky treasures

The Comte then took us upstairs to the tasting room (always my favourite part of a winery visit) where he introduced us to Pierre Meslier, régisseur of Château d’Yquem and Château de Fargues since 1963. Pierre took great delight in our worshipful appreciation of his creations and proceeded to anoint us with samples of his 1983 vintage. I had never had the opportunity to taste an Yquem before and, as a budding oenophile, was in for a truly life-altering experience. Permit me to hand over its description to Robert Parker and his gushing hyperbole: “A wine that is just hitting its adolescence, this spectacular Yquem is the great vintage of the early 1980s and is the best Yquem since 1976. The wine has medium-gold color and an extraordinary nose of honey-dripped coconuts, pineapple, caramel, crème brûlée, orange marmalade, and no doubt a few other items. Unctuously textured and full-bodied, with massive richness and great sweetness, this is a seamless classic that will probably be immortal. Anticipated maturity: 2005–2075. Last tasted: 3/02. Score: 98/100.”

What an experience. As we parted, we presented Comte Alexandre with one of the 1988 winter Olympic coins that we had brought along as thank you gifts. He seemed genuinely delighted and said he would put it in the large glass presentation case where the many Château d’Yquem trophies and awards were proudly displayed. 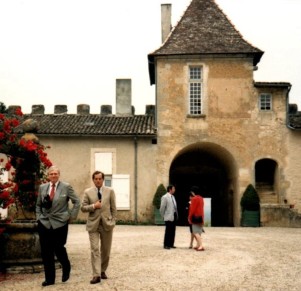 Arnaud and I sauntering happily away from Yquem

That evening we dined at the Automobile Club Formation du Sud-Ouest back in the city of Bordeaux. We were told that it was a very exclusive establishment. Our reservation was for 10:00 p.m. and when we arrived at the appointed hour, the voluminous, imposing, somewhat gloomy restaurant was empty except for us and the wait staff. So much for exclusivity. However, the place filled up as we finished our entrées. Seems the privileged denizens of Bordeaux elected to dine late.

By way of a postscript, the luxury goods company LVMH purchased half of the shares of Chateau d’Yquem for $10 million in 1996. Unfortunately, the relationship between the new owners and the family members was turbulent to say the least resulting in many protracted law suits. Finally, after a long, acrimonious court battle and multiple lawsuits involving many family members and heirs, the Comte arranged for L.V.M.H to purchase the remaining shares of the property in 2004. As the result, more than 200 glorious years of Lur Saluces stewardship came to an end.

PS: If you enjoy fabulous wines from the Rhône Valley, take a gander at our Arthur’s Cellar website. Better yet, sign up on our homepage to receive our electronic bulletins – no fees or other obligations; just great wine.

Please “like” our blogs, if you have enjoyed our musings, or add a “comment” — clickable at the top or bottom of each story. The search function works really well if you want to look back and see some of our previous articles.