LEVIATHANS OF THE LAGOON GETTING CAST ADRIFT

In August of 2017, I wrote about the negative impact that large cruise ships were causing for small ports and historic city centres in a blog called Is my ship too big? Recently, the Italian government took action to address the problem in Venice, and it may not be long before other countries follow suit.

After a decades-long battle, residents in Venice have succeeded in getting cruise ships banned from docking in its ecologically sensitive lagoon near the city’s historic centre.

Damaged river boat after being hit by MSC Opera

Last week, the Government of Italy announced it would begin re-routing cruise ships away from the lagoon starting in 2020. The decision follows a series of dangerous incidents, and years of damage to the shoreline and city’s crumbling foundations caused by the huge wake left by giant cruise ships.

In June, the MSC Opera crashed into the crowed quayside of the Giudecca Canal and hit a smaller vessel docked there, injuring five passengers. Later that month during a storm, the Costa Deliziosa narrowly missed ploughing into a canal-side restaurant on the bank of the Giardini della Biennal.

Beyond the environmental damage, the 50,000 local residents of Venice say they are being overwhelmed by tourists, which reach 60,000 daily during the peak summer season — half of those coming from cruise ships. The growth in visitors, a steady exodus of long-time residents, and the visual blight created by mega-cruise ships towering over the city have led to protests against ships in the Venetian lagoon since 2006.

“No Big Ships” protest in Venice

After the incidents in June, thousands of Venetians marched against what they see as “sea monsters,” warning the ships are clogging the city’s narrow waterways and destroying the lives of locals. More recently, 5,000 people gathered at the city’s iconic San Marco Square and nearby in small vessels to protest what they called “bisons of the sea” that threaten the city’s survival.

It’s become so bad that city officials have even proposed measures to cut down on tourist traffic and rid the city of what it calls “boorish” behaviour by introducing fines and a €3 per person entrance fee for day-trippers that is scheduled to begin by December 31, 2019.

According to a story in the Financial Times, Italy’s minister of transport Danilo Toninelli said the cruise ships would gradually be moved away from the Giudecca Canal, the main waterway currently used by cruise ships visiting Venice, to piers well away from the city. These include the Fusina and Lombardia terminals some three miles away across the lagoon, on the Italian mainland. 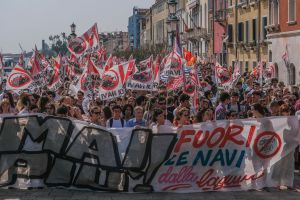 Mr. Toninelli promised that a third of all cruise ships visiting Venice would be rerouted by next year. He also said the government hoped to create new cruise ship piers near the opening of the lagoon at Chioggiae, or at Lido San Nicolo, a ferry terminal on the Adriatic side of Lido Island.

For decades, local politicians in Venice have been debating the economic costs and benefits of visiting cruise ships. For example, some claim the cruise industry boosts the local economy by an extra €280 million a year. However, critics say that the 500 cruise ships that visit each year add little value as their passengers are mostly day-trippers who spend little money in restaurants, hotels and shops, while causing congestion and leaving huge amounts of litter behind. They are also concerned about the environmental impact from cruise exhaust, and the damage caused by bow waves to the fragile foundations of Venice.

Large cruise ship in the lagoon

At a minimum, the city wants stronger rules that will protect its UNESCO world heritage site status.

According to the Brussels Times, Venice is looking to join forces with Bruges and other European port cities in the hopes of reducing the impact of large cruise ships and their passengers.

“I have written to all the European cities that share our experience of cruise tourism and that need to strike a balance between economic development and environmental sustainability,” Pino Musolino, the head of the Venetian port, told the paper. The appeal went to the ports of Barcelona, Amsterdam, Marseille, Dubrovnik, Bruges (Zeebrugge), Hamburg, Palma and Málaga.

“The growing size of the vessels, their environmental impact on the areas around our ports and the pressure exerted by the increasing number of tourists are creating a conflict situation,” added Musolino.

Whatever the final outcome for Venice, it’s clear that many of the world’s oldest and most popular tourist destinations are being negatively impacted by the unbridled growth of tourism. If we want to protect these iconic places for future generations, more controls and tighter rules are needed on tourism, especially when it comes to Venice and its Leviathans of the Lagoon.

Please “like” our blogs, if you have enjoyed our musings, or add a “comment” — clickable at the top or bottom of each story. The search function works really well if you want to look back and see some of our previous articles.