RESPLENDENT IN OUR ROBES 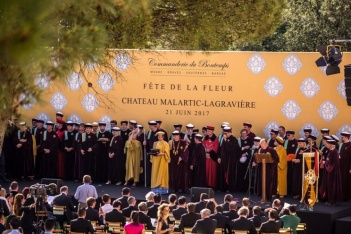 It’s hard to believe, but Claudia Cardinale, Hugh Grant and Jackie Chan have something in common with our wine scribe Jim Walker.

This extraordinary circumstance came to pass as our troop of tipplers toured Bordeaux in the late spring of 1988. It had already been a remarkable day that began with a tour of Château Ducru-Beaucaillou followed by lunch with the owner, Jean-Eugène Borie and his family (see O! Bordeaux – Sojourning in Saint-Julien for all the yummy details) and then a mid-afternoon tasting at the renowned Château Latour (refer to O! Bordeaux – Lust Loomed Large at Latour for the sordid story). It had been a day that any Bordeaux fancier would envy. But, what lay in store for the rest of the day was the vinous icing on the cake.

François Chandou, the host and guide of our incursion of Bordeaux, had asked us to write a short essay outlining our Bordeaux chops – our first encounter, our most memorable bottle, our mentors, our cellar holdings and so on. I jotted down how my father and uncle had started the ball rolling (When Bacchus Beckoned), my rapturous encounter with an unforgettable 1960 Léoville-Barton with its wonderful label, the wisdom imparted by Sherwood Deutsch (A Veritable Vinous Valhalla) and a list of all the Bordeaux nestled in my cellar that Sherwood had sold me over the years (at discount prices, natch). There was method in François’ strange request for he had submitted our essays to the Commanderie du Bontemps de Médoc et des Graves (since conveniently lengthened to Commanderie du Bontemps de Médoc, des Graves, de Sauternes et de Barsac) for membership consideration. Lo and behold they had accepted us – Francois, Arnaud Ratel, Loïc de Kertanguy and yours truly to become Commandeurs d’Honneur of this eminent group. We were headed to the Commanderie’s offices in Pauillac for our induction. These ceremonies are usually held twice a year at flowering and harvest time and are hosted by one of the Bordeaux wineries. They are grand events. Somehow François had convinced them to hold a special session just for the four of us. 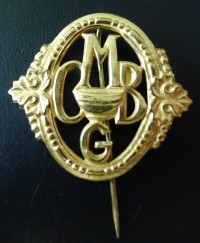 Our minibus stopped in front of a fifties-style low rise building in the middle of town. We bounded up the short flight of stairs into the vast reception hall where we were greeted by a number of elderly gentlemen garbed in purple robes and decidedly odd looking hats. As it turned out, this was not just any ordinary gaggle of ersatz monks but la crème de la crème of the Bordeaux wine establishment. Among them were Henri Martin of Châteaux Saint-Pierre, Gloria, Bel Air and Haut-Beychevelle Gloria (also the founder of La Commanderie in 1949 to mirror the highly successful Chevaliers de Tastevin in Burgundy), Yves Fourault of Château Beychevelle, Xavier Borie of Château Grand-Puy-Lacoste and Jean-Louis Triand of Châteaux Gloria and Saint-Pierre to name but a few. We milled about for several minutes introducing ourselves and inspecting the Bordeaux paraphernalia scattered about.

Who knew bluffing could be so hilarious?

The ceremony then began with Jean-Louis Triand reading aloud our résumés derived from the write-ups François had us prepare. Then Yves Fourault approached us with a full glass of wine in his hand. He explained that before we could be inducted, we had to identify the wine he held in his hand – right down to the geographic source, vintage and producer. We were each given a glass. Then, to my abject horror, M. Triand approached and asked me to identify the deep scarlet liquid. Gulp! I didn’t have a clue. How not to look like a complete idiot in front of this august assemblage? I gave the wine a sagacious inspection, holding it up to a light, swirling it in the glass, placing it beneath my quivering nostrils and breathing deeply. Then I took a dainty sip, making as many wine slurping sounds as I could manage. All this gave me a few precious moments to think. Finally, in as an authoritative a voice as I could conjure up, I proclaimed, “This is a red wine.” Long pause. “It comes from Bordeaux.” Long pause. “Now then, I would be pleased to pinpoint the source, the vintner and vintage but then my colleagues would have nothing left to do, which would be terribly unfair, so I will let M. Ratel carry on from here.” M. Triand thought this was very amusing … Arnaud not so much. 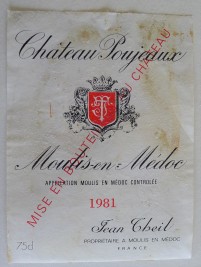 My colleagues could do nothing to advance the identification process. But, the Le Grand-Maitre, as an act of great compassion, granted us entry to the Commanderie anyway. It turned out that the mystery wine was a 1981 Château Poujeaux, a top-rated Cru Bourgeois from the Moulis appellation in Bordeaux. That’s a photo of the actual label from the bottle over which we ruminated. Here are my tasting notes scribbled down after the investiture: A deep garnet red with aromas of cherries, cedar, violets, tar, tobacco and a hint of clove. Medium-bodied with pronounced tannins and a fine, lingering aftertaste. This is a very nice wine. 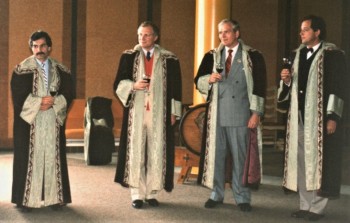 François, Loïc, yours truly and Arnaud–Resplendent in our robes

Next came the donning of the sacred robes (there is something positively ecclesiastical about sporting an ornately decorated robe even if mine was a little on the small side) at which point we officially became Commandeurs d’Honneur de la Commanderie du Bontemps de Médoc et des Graves, a great honour indeed. But not all that exclusive so it would seem given that there are around 25,000 other Commandeurs the world over, including the three aforementioned movie stars. We were each presented with a spiffy certificate and a nifty gold-coloured pin that we were to wear anytime we partook of Bordeaux wines. And that was it. We handed back our robes and bade our conferrers a fond farewell, promising to forever drink as much Bordeaux wine as we could.

That evening we decided to celebrate our inductions and relive all the marvellous things that had happened that day at a popular local restaurant called Le Lion d’Or. Located in Arcens en Médoc just outside of Pauillac, it was a favourite of the neighbouring vintners and well-known for its boistrous revelry. It was also noted for its talented, flamboyant chef, Jean-Paul Barbier. The restaurant was nearly full as we entered and we were instantly, pleasantly assaulted by the most wonderful aromas and spirited babble of convivial conversation. The dining area was long and narrow with a floor of large beige and brown tiles laid diagonally and wooden tables decked out in white linen and covered with glasses and silverware. One wouldn’t call it glamourous, but it was easy to tell that this was a serious eatery. We settled in at a table near the entrance and immediately ordered red and white bottles of Médoc Cru Bourgois (who could afford the stuff we’d been drinking all day?). Les vignerons were passing bottles of the fruits of their labours from table to table but, malheureusement, none made even the briefest of pauses at our table. 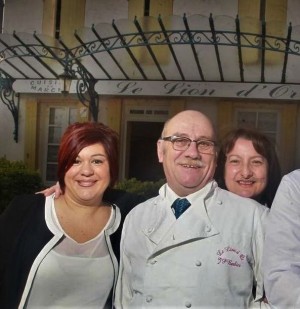 We had a grand time selecting our meals from the wide range of hearty fare listed on the carte. We had just placed our orders when new couple arrived and were seated at the table across from us. You couldn’t miss them. He was large, middle aged, colourfully dressed, had a florid complexion, spoke (more accurately bellowed) in a thick Texan drawl and had all the social graces of Donald Trump. She was about half his age, scantily clad, very flamboyant and appeared to be blonde. They were definitely disturbing the natural rhythms of Le Lion d’Or. Soon they too were ordering, but in a loud and decidedly obnoxious way. The waiter cringed all the while. Then the bimbette, as Hélène called her, hollered out, “Is the salmon fresh?” At that the waited scooted back to the kitchen.

Moments later Chef Barbier appeared at their table side holding a huge, still flopping salmon and positioned it inches from her face. “Is this fresh enough for you, Madame?” Her shriek still rings loud in my ears.

Our American neighbours passed the rest of the evening in relative silence, much to the merriment of the assembled diners. Our meal at Le Lion d’Or was brilliant and a fitting conclusion to a magical day.

Before I sign off, I want to tell you about a fabulous red wine that is perfect for the barbeque. And, it’s available right now on LCBO.com. It is the stunning 2017 Côtes du Rhône from Domaine Giuliani called les Notes de Louis. This glorious red is almost entirely Grenache–and the Giulianis are very, very talented Grenache growers. I can’t over-emphasize how good the 2017 vintage was in the Southern Rhône. This robust beauty (15.5 per cent alc./vol.) is a brilliant dark ruby colour and exhibits a pronounced, lively nose of raspberries, plums and cherries. In the mouth these persist, accompanied by black currents and hints of pepper and licorice. It is big and wonderfully round and supple with silky tannins and surprising length. This stunner will go marvellously with all kinds of grilled meats. While drinking brilliantly well now, it will keep nicely for at least three or four years. This is terrific stuff and only $18.40 the bottle.

PS: If you enjoy fabulous wines from the Rhône Valley, take a gander at our Arthur’s Cellar website. Better yet, sign up on our homepage to receive our electronic bulletins – no fees or other obligations; just great wine.

Please LIKE this blog, if you have enjoyed the article, or add a COMMENT — clickable at the top or bottom of each story. Click on the FOLLOW button at the bottom of the page if you would like to receive email notifications of new articles. The SEARCH function at the top works really well if you want to look back and see some of our previous stories.