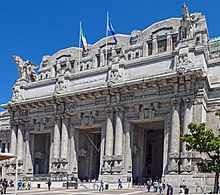 Located in northwest Italy about 35 miles south of the magnificent Alps and a stone’s throw from the gorgeous Italian Lake District, Milan offers a sublime mixture of high end fashion, historical architecture, and tons of culture, including Leonardo da Vinci’s classic mural “The Last Supper.”

As dusk began to fall, our 4 ½-hour train journey from Geneva through the Swiss and Italian Alps finally came to an end at Stazione Milano Centrale, the city’s imposing Art Deco railway terminus built in the early 20th-century .

Located in the heart of Italy’s northern region of Lombardy, Milan was conquered by the Romans in the 3rd-century BC and eventually evolved into a leading mercantile centre during the Renaissance period under the rule of the Visconti and Sforza families.  During this era, many architects and artists were attracted to the city, including the legendary painter and inventor, Leonardo da Vinci.

Gail in front of the Duomo

While Milan can’t compete with Rome and Florence in terms of the number of historic buildings and works of classic art, the city does have several iconic attractions. These include the Duomo di Milano, the Teatro Alla Scala, and da Vinci’s famous painting–The Last Supper. Milan is also the centre of Italian business, fashion, and modern art, and one of the chicest cities in Europe.

After a short cab ride to our hotel in the old city centre, we (me, Gail and our friends Barry and Toni) decanted our luggage and walked to the nearby Galleria Vittorio Emanuele II, the huge glass-domed shopping arcade built in the 19th-century and named for the first king of Italy. The arcade features a number of luxury shops like Gucci and Prada, as well as several charming bars and restaurants, including La Locanda del Gatto Rosso where we dined on delicious Porcini Pizza with local Lombardian red wine. 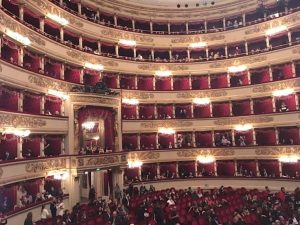 The next afternoon we headed to our first stop of the day, Milan’s stunning 15th-century Cathedral known as the Duomo. The third largest church in Europe (it can hold 40,000 worshipers), the Duomo was built almost entirely with pink-hued marble brought to the city from quarries near Lake Maggiore via a series of canals. The cathedral’s Flamboyant Gothic design features decorative motifs, clustered columns, sharply pointed spires, intricate sculptures, and flying buttresses.

Inside, the Duomo boasts a 500-ft long nave with 52 pillars that support a ribbed ceiling, magnificent stained-glass windows, and dozens of beautiful statues that culminate at the apse. Above the altar, there is a tiny red light on a cross that marks where a nail from the cross of Jesus is kept.

After touring the Duomo, we walked through the nearby Galleria Vittoria Emanuele II and across the Piazza della Scala to Milan’s 18th-century neo-classical opera house.  The world-famous home of Italian opera, the lavish Teatro Alla Scala is where the greatest singers of the past 200 years have appeared, and where Verdi, Puccini and other great composers first had their works performed.

Our tour guide took us to the top floor of La Scala and into a plush balcony box where we looked out over a spectacular theatre of some 2,000 seats, most in the six tiers of boxes that surround the stage on three sides.  Then we were ushered down to the theatre’s museum, where we saw a collection of paintings, busts, costumes, and other memorabilia relating to the history of La Scala and Italian opera.

From here we headed to the Church of Santa Maria delle Grazie to see one of the most inspirational pieces of Renaissance art, The Last Supper fresco, a magnificent painting by Leonardo da Vinci. Commissioned by the Sforzas, Milan’s leading family of the day, to decorate the dining hall of the monastery that adjoins the church, da Vinci began work in 1492 and finished six years later. Unfortunately, da Vinci’s masterpiece began to deteriorate just a few years later as he had painted it in layers as he would have done on canvas, rather than applying pigment to wet plaster in the usual fresco technique.  Consequently, over time the painting has undergone many bouts of restoration which has diminished some of its colour and clarity.

Our highlights tour of Milan having now come to an end, we headed to our favourite restaurant in Milan, Da Vic Ristorante Guerrini .

Da Vic is a cozy neighbourhood restaurant with outstanding food and service, and is always filled with locals who know their food. I enjoyed an appetizer of raw shrimp ceviche followed by veal cheek with pasta in a rich ragu sauce, while my wife Gail started with deep fried zucchini flowers, and finished with grilled octopus. It’s customary for Victor (Vic) the chef to come by each table to talk with diners before they leave; however, we left to catch our Uber ride before Vic could get to our table. But as we were getting into the car, he came running out on the street to give us a hug and make sure he thanked us before we left!

The next morning we took the subway to the Castello Sforzesco, the 14th-century fortress that was transformed into a private residence during the Renaissance period by the Sforzas.  Today the Castello houses a number of important museums that include a collection of Milanese and Lombard paintings, and the famous Pietà Rondanini, the haunting and sadly unfinished marble statue by Michelangelo that he worked on for over a decade before his death. The statue depicts the Madonna standing and supporting the body of her son, Jesus, after his crucifixion. 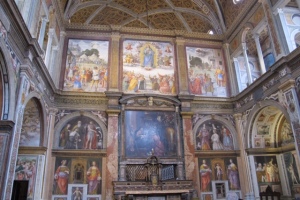 Just a few blocks south of the Castello we found the 16th-century church of San Maurizio al Monastero Maggiore, which is sometimes called the Sistine Chapel of Lombardy because it is graced with so many beautiful works of art. My favourite artwork in the church is a series of gorgeous frescoes from the 16th century, including one depicting the life of San Maurizio by Bernardino Luini, who was a follower of da Vinci.  A stunning fresco adorns the vaulted ceiling in a section of the church called the Hall of Nuns, which depicts a starry sky with God, the Evangelists, and angels.

Continuing further south we stumbled upon the Piazza Affari , a small square that faces the Milan Stock Exchange. In the middle of the square is a marble statue of a large hand with its middle finger extended up as if to say “F*ck business!” The status’s title is L.O.V.E., which stands for Libertà, Odio, Vendetta, Eternità (Freedom, Hate, Vengeance, Eternity), and was created in 2010 by the Italian artist Maurizio Cattelan. The statue was supposed to stay in Piazza Affari for just a couple of weeks, but the city government decided to keep it there indefinitely, much to the chagrin of local bankers.

Of course, no visit to Milan would be complete without seeing a museum dedicated to Leonardo da Vinci who lived in Milan from 1482 until 1499. So after lunch, we made our way to the Leonardo3 Museum, a temporary exhibition dedicated to the great artist and inventor, with working models of his machines and digitalized restorations of his paintings.

The amazing working models of machines designed by Leonardo on display include a submarine, a mechanical eagle, a rapid-fire crossbow, and reconstructions of his musical instruments. There’s also a digital restoration of da Vinci’s The Last Supper that provides information on the story and the science behind the painting.

Later that evening as we sat in a café enjoying a glass of wine, we wondered why so many tourists to Italy flocked to cities like Rome, Florence and Venice, but rarely added Milan to their itinerary. It was a mistake we had made for many years, but one that we would not repeat in future. 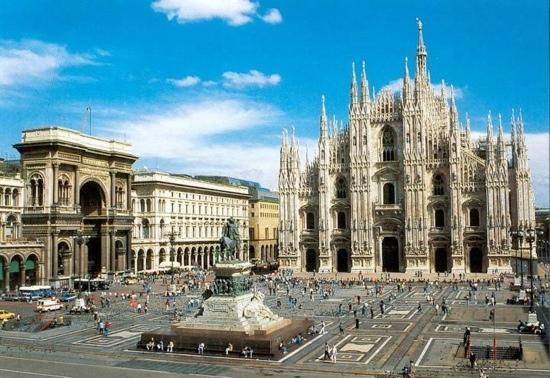 Please LIKE this blog, if you have enjoyed the article, or add a COMMENT — clickable at the top or bottom of each story. Click on the FOLLOW button at the bottom of the page if you would like to receive email notifications of new articles. The SEARCH function at the top works really well if you want to look back and see some of our previous stories.