A SPIRIT OF COMMUNITY

In our little Yorkshire village, the sense of community pride is such that every garden is filled with flowers and manicured to within an inch of its life, the lanes are spotless, and the village has won the Britain in Bloom award.

As I wrote in Village Life the community has done so well in competition, it was asked to step aside and let other folks have a chance. So, although there haven’t been any awards for a while, the sense of communal effort is tangible when you enter the village. Drive past the 11th century church, or the ruins of the 15th century manor, or even the newly renovated pub, with its delightful patio bordered with boxes of flowers. There’s no litter, tubs of flowers border our residential lane, and a weed barely dare show itself along the verge. The garden club has been active again, but sadly, we weren’t in the UK in July to participate in the open gardens event. Nevertheless, by keeping our tubs of flowers full of blooms, we are there in spirit.

Garbage piles up outside a Toronto homeless shelter, courtesy of an inattentive Council

In the farmers’ fields, wild poppies abound. Nearby, come springtime, more than a mile of hedgerow has been planted with thousands of daffodils.

There’s a dark curse behind all this beauty. Those evil characters who indulge in fly-tipping despoil country lanes with bags of waste, dumpster loads of building rubbish and old stoves and fridges. Suspects include those folks who knock on the door and offer to take away any old stuff for a modest fee. If you assume it’s going to a proper waste recycling centre, you need your head examined. They trouser your cash and tip it “on the fly” beside the nearest lonely lane, or in a farmer’s field. 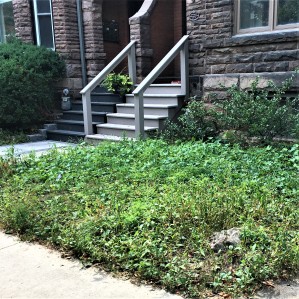 Bad Toronto neighbour’s front garden is all weeds and rubbish

Fortunately, our Yorkshire community is up in arms, the local Council has installed hidden cameras to catch the culprits, and eventually the villains will stop. Sadly, they’ll probably just go somewhere else that is less well guarded.

A story in The Guardian reveals that “new research by environmental groups and the national Tidy Britain group suggests that grassroots anger is mounting as evidence shows that Britain is one of the most litter-blighted countries in Europe – its parks, verges, wasteland and housing estates fouled by packaging, cigarette ends, drinks cans and bottles.”

“Rates of fast-food littering and fly-tipping are on the rise and people find this really offensive. We are now on the verge of a crisis,” said Richard McIlwain, the head of Tidy Britain. “We seem to have more litter than anywhere else in the world.”

“Everyone wants clean streets. There is not necessarily more litter than a decade ago, but it is now less socially acceptable,” said Richard Beddoe, Westminster council’s cabinet member responsible for street cleaning.

“We have to change the culture. Fines do not work. They haven’t reduced the amount of litter or raised revenues. We have to persuade people to change their habits. It used to be socially acceptable to drink and drive. Now it’s not. Littering should be made socially unacceptable in the same way. The big stick does not work. The goal has to be a complete change of attitude.”

In the UK at least, everyone is moaning as usual, and small groups of volunteers get out regularly to clean up after the litterbugs, but I’ve not been able to find one decent suggestion on how to treat the bigger problem. In my mind, communities need to be “woke” to their responsibilities for their own cleanliness. Not littering has to be a habit, rather than thoughtlessly chucking rubbish down on the ground with no consideration for who will pick it up later. These quotes hit the nail on the head, but if the blokes at the top of the rubbish pile haven’t any better suggestions for fixing the problem, then Britain is surely going to sink in a mountain of its own muck.

In Toronto, on streets around our Annex neighbourhood, there seems little sense of the community spirit that unites our Yorkshire village through the Brit’s well-known love of gardening. Setting an example, Diane has transformed the scrubby patch of boulevard grass in front of our townhouse into a veritable jungle of greenery, perennials and spring bulbs. A delightful crazy paving path leads those who have parked on the street through the shrubbery to the sidewalk. Our neighbours have joined the effort, though not all of them keep their patch of green up to the standards of the rest. Now that we are older, we have a couple of lads come in every month to do the weeding, a worthwhile service.

On nearby streets, some owners garden with enthusiasm and others take a more lackadaisical attitude. One garden was so strewn with trash from a nearby bus stop, they got the City to put up a sign. However, their property has such an air of abandonment, a bulldozer might do a better job.

It must infuriate those who have an immaculate garden, to be adjacent to those who have unmown grass and weedy unattended flowerbeds. Walking round the block, I found countless examples of urban neglect, next to pristine presentations. Surely these people, who walk out of their houses every day past decay and rubbish, must have some gene missing. My grandmother would have simply said they weren’t well brought up.

With that thought, I realize we must start with the children. If we don’t instill the habit of living in a litter free environment on the young as they are growing up, then this problem will never be solved.

Don’t despoil your own habitat, or to put it more bluntly: “Don’t sh*t in your own nest!” If we start there, perhaps the bigger problem will slowly be resolved.

This is the last in a three-part series on the world-wide problem of waste and litter. The first was Oceans in Peril and the second was Who’s a Litterbug?

This is Nigel’s 256th blog on Gentleman’s Portion. The SEARCH function at the top works really well if you want to look back and see some of our previous stories.