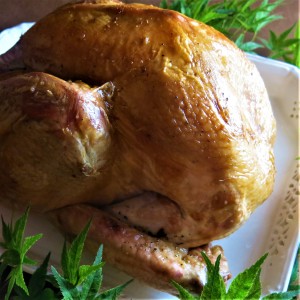 In two weeks it will be Thanksgiving in Canada, and for the third year in a row, I’m going to miss all the fun and festivities, but some outstanding holiday recipes follow if you read on.

The USA, our neighbour to the south celebrates on the fourth Thursday in November. In the UK, where we’re visiting, the Anglican Church of England celebrates Harvest Home, but no feasting occurs.  The trick to my celebration in Yorkshire will be to find a turkey, normally unobtainable in England at this time of year.

The Brits have been giving thanks for successful harvests since pagan times so it was probably a bunch of old Druids who decided the festival should occur near the fall equinox when the harvest moon was full, to light the way. This year that planetary intersection was on Sunday, September 21.

In North America, Thanksgiving has become almost entirely a secular holiday and an excuse to stuff ourselves with traditional turkey, roast potatoes and cranberry, all native to the continent.

The Pilgrims arrived in America on a Thursday, and that day has been celebrated ever since. Since 1621, individual states marked the festival on various occasions until American Civil War President Abraham Lincoln proclaimed a national date as the last Thursday of November, in 1863, which was eventually formalized by President Franklin Roosevelt in 1941, as the fourth Thursday in the month, which this year falls on the 28th.

Canadians possibly celebrate Thanksgiving before the US because we’re further north and our crops are all harvested earlier. When United Empire Loyalists fled the US during the Revolution, they brought us the tradition of turkey and all the trimmings. Bless them.

The reason I’ve skipped turkey in Canada over the past few years was because, as a dutiful son, I attended (indeed helped organize) my mother’s significant birthday celebrations, which fell on October 13. I’m not sure we made every one, but I have photographic proof we were drinking Scotch together on her 90th, and later her 99th and 100th, when she was pleased to get her letter from H.M. The Queen. She nearly made her 101st but died shortly beforehand. So, the family gathered to scatter her ashes in the English Channel on what would have been her birthday.

This year, my middle daughter, who lives in Oxford, my beloved Diane and I are in the UK and I am determined to celebrate in the Canadian tradition. Far be it for me to suggest smuggling a bird in my suitcase, but I did bring a can of cranberry sauce, just in case fresh ones weren’t available. Fortunately, in the little village of Harthill nearby, there is a row of shops, including a butcher and a baker (but no candlestick maker). Tony, the friendly owner of Harthill Butchers, has kindly organized a bird for the occasion. There is also a very good veggie shop, so we will have roast potatoes and Brussels sprouts galore.

Jim Walker, our esteemed wine expert, suggests two great choices from Domaine Palon. In Ontario both are available on LCBO.com.

2017 Vacqueyras Blanc du Bary: This luscious, refreshing white was crafted from 80 per cent Clairette and 20 per cent Grenache Blanc, both hand-picked from vines averaging more than 45 years of age. The yield was but 13 hl/ha! It has seen some new oak, but not too much. It is a clear, bright yellow-gold colour with a vibrant nose of grilled almonds, peaches, pears, honeysuckle, vanilla, exotic spices, toast and minerals. It is very smooth and extremely well balanced–lots of fruit offset by a gorgeous acidity. It is fresh, complex and rich with wonderful flavours of peaches and pears. It would be perfect, served at about 8°C, with rich poultry dishes, such as turkey, oysters, other shell fish, fish, and goat cheese. Meant to be drunk young.

2017 Gigondas Rouge: This elegant Gigondas is made from 79 per cent Grenache, 15 per cent Syrah and 6 per cent Mourvèdre, hand-picked from seven hectares of vines averaging well over 50 years of age. The Syrah and Mourvèdre are aged for 12 months in new oak casks. It is a pure purple with a lustrous sheen and offers up pronounced aromas of blackberries, black cherry jam, pepper, roasted coffee beans, garrigue, pepper, clove and licorice. It is surprisingly big and velvety in the mouth with gentle tannins and a long, perfumed finish. I’d like to see another six months to a year on it to get everything in proper balance. Served just below room temperature, this most impressive wine will go perfectly with turkey, magrets de canard, wild game, other roasts and medium cheeses. Decant it for at least an hour before drinking. It will cellar well for 10 to 15 years.

If you’re reading this too late to affect your Canadian Thanksgiving plans, then please bookmark the blog for a couple of weeks before American Thanksgiving or Christmas!

And now, for those of you who need a quick refresher on the best ever roast turkey recipe, here it is, from Market to Table: The Cookbook, my Thanksgiving gift to you. Plus, my outstanding stuffing balls and lemon and thyme roast potatoes. You’re welcome.

Note: Serve with festive stuffing balls, and your choice of vegetables, such as lemon and thyme roast potatoes, Brussels sprouts, beets and carrots, cranberry sauce and pan gravy.

Makes 20 to 24 balls. Voted best new dish at my Family Feast this past Christmas, they are an easy alternative to stuffing in a bird’s cavity. 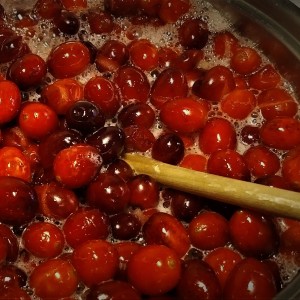 Note: Option: for a spicier version add 2 in. stick of cinnamon, 3 whole cloves and 3 allspice berries. Allow to marinate for at least a day. Remove spices before serving.

This is Nigel’s 257th blog on Gentleman’s Portion. The search function works really well if you want to look back and see some of our previous articles. All recipes are under Market to Table, q.v.

Market to Table: The Cookbook is a great a gift idea for yourself, friends, family or anyone who loves to cook, available for about $12 as an eBook on Lulu.com, i-Tunes and Amazon.