Tasting wine at four Bordeaux châteaux would be a treat for any oenophile. But, in a single day … before lunch? Join our wine scribe Jim Walker and his fellow imbibers as they accomplish this marvellous feat.

That Friday in late spring of 1988 began much like the five days that preceded it … overcast, a tad on the chilly side and filled with the anticipation of delicious wines about to be tasted and, perhaps, consumed. But, there was one big difference. This was the final day of our wondrous week-long tasting invasion of Bordeaux. And, we were going to complete it in style with visits to two of region’s First Growth estates.

But first on tap was an early morning tasting at Château Beaumont, our home for most of the week. This winery can be traced back to 1772, making it one of the oldest producers in the Médoc. Its landholdings were tiny back then, but over the years neighbouring properties were acquired until, at 280 acres, it became one of the largest vineyards in Bordeaux. The chateau, having been completely renovated just before our stay, was designed and built in 1854. The estate was not included in the next year’s Bordeaux official classification and has remained a humble Cru Bourgeois ever since. The estate is owned by the Grands Millésimes de France, a partnership between the GMF Insurance Company and Suntory Beverage & Food Limited. They own Château Beychevelle as well.

Arnaud, me and the gates of Ch. Margaux

Philippe Dhalluin, Château Beaumont’s winemaker, met us on the front steps and led us across the manicured lawn to the modern winemaking facilities. On the way he expounded upon his philosophies about viticulture and of creating fine wines. We were soon tasting his latest vintages which, compared to the great wines we had been enjoying, seemed just a bit one dimensional. They were good, but we had been terribly spoiled. There is no doubt that Philippe knew what he was doing for a few years later, in 2003, he became responsible for winemaking at Baron Philippe de Rothschild S.A. which included Château Mouton Rothschild in Pauillac, Opus One in Napa Valley, Viña Almaviva in Chile, Domaine de Baron’arques in Limoux and two other Pauillacs, Château Clerc Milon and Château d’Armailhac where he now has his office. Spending an early morning hour with Philippe and his wines was a splendid way to start our last day.

Next on the agenda was a visit to storied Château Margaux. Records of the property date back almost a thousand years to the time when it was known as La Mothe de Margaux and was exclusively reserved for royalty. But, there were no signs of vines back then. It was up to Pierre de Lestonnac in the late 16th Century to restructure the property and convert its grain fields into vineyards. From then on in the wines of Château Margaux have been favourites of affluent lovers of the nectar of the grapes. In 1705 the London Gazette promoted the first sale of top Bordeaux wines including 230 barrels of ‘Margoose.’ The wine wasn’t bottled at the chateaux back then. Thomas Jefferson, the United States ambassador to France and an oenophile par excellence wrote of 1784 Margaux: ‘There cannot be a better bottle of Bordeaux wine.’ 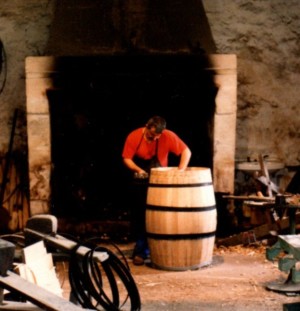 The estate was confiscated during the French revolution. In 1810, the new owner, the Marquis de la Colonilla hired the architect Louis Combes to build the chateau (in neo-palladian style), the cellars and the cooperage that are still in use today. The Ginestet family took over in 1950, but was forced to sell in 1977 due to financial pressures. The quality of the wine suffered significantly during their tenure. While it might be hard to fathom today, the estate was on the market for almost two years before it was finally purchased by André Mentzelopoulos for only $16 million dollars. André and his daughter Corinne, who inherited his entire estate in 1980, injected a huge amount of cash into Château Margaux. That investment and wise decisions eventually paid equally massive dividends. Château Margaux is easily worth $1 billion today, with annual revenues of about $100 million.

We were greeted by a charming hostess as we approached the front door that was framed by four massive Ionic columns. She took us on a tour of the château and grounds. To say the least, they were breathtaking. After drooling over the magnificent principal rooms of the chateau, we visited the barrel-making facility and then inspected the family’s wine cellar (like an ancient crypt) that included bottles of Château Margaux dating back more than a hundred years. In due course we met up with Philippe Barré, the estate general manager (regisseur) in the silent, cavernous, dimly lit barrel room. It contained what seemed like an endless phalanx of barrels, each with its centre stained garnet with wine juice. It was cathedral-like with the sweet musty aroma of aging wine a proxy for incense. Philippe professorially imparted his encyclopedic knowledge about Château Margaux and its vineyards to us willing acolytes. He conjured up such scintillating information as Château Margaux is but one of five first growths (and the only one with the same name as its Bordeaux appellation), that their vineyards cover 647 acres and that about 150,000 bottles of Château Margaux are produced each year.

Eventually Philippe announced that it was time to taste some of his wines. There was nary an objection. First to make the ultimate sacrifice was a 1985 Pavillon Blanc de Château Margaux, the estate’s white Bordeaux. It was 100 per cent Sauvignon Blanc grown on a single plot of land, a third of which was aged in new oak barrels for seven months or so. A pale straw colour, it was fruity, flinty and crisp with notes of vanilla and spice. Very nice indeed. We then moved on to a couple bottles of Pavillon Rouge du Château Margaux, the winery’s second tier red. This brand was first made in 1906 because the estate’s young post-phylloxera vines did not produce fruit of sufficient quality to qualify for the flagship Château Margaux. Still the second wine, today’s Pavillon Rouge is considered a match for a second or third growth Bordeaux and commands a similar price. The two we tried, a 1985 and a 1986 were excellent and would have happily been invited to our dinner table on any occasion.

The grand finale was a 1983 Château Margaux. Here’s how the noted wine writer James Molesworth described it in 2014:

This pulls together all the glorious notes of a fully mature Margaux, with singed cedar, rooibos tea (betcha haven’t had one of those recently), rose water and sandalwood aromas, followed by a stunning mélange of both fresh and dried red and black fruits, including currant, cherry, raspberry and plum. The long finish lets everything drape together beautifully. Absolutely stunning, this seems in no hurry to go anywhere. Remarkably fresh and defined at this time. Non-blind Château Margaux vertical (December 2013). Drink now through 2035. Score – 98.

I couldn’t have said it better myself. Incidentally, not long ago the LCBO sold a magnum of 1983 Château Margaux for a mere $6,400!

We took our leave from Château Margaux after thanking M. Barré, who retired just a couple of years after our visit, for his kindnesses and generosity. We had one more tasting slated for that morning just a few kilometres away in the Saint Julien appellation at Château Saint Pierre. Château Saint Pierre is another ancient Bordeaux winery with roots dating back to the 17th century. It is said that vines were first planted there in 1693 when it was called Serançon. Baron de Saint Pierre bought the estate in 1767, hence the name Chateau Saint Pierre. The winery garnered a fourth growth ranking in the 1855 Bordeaux classification. The estate then waxed and waned in size and quality until Henri Martin took control from his father Alfred in 1982. The 42 acre Saint Pierre vineyard, the smallest in Saint Julien, is comprised of 75 per cent Cabernet Sauvignon, 15 per cent Merlot and 10 per cent Cabernet Franc.

Henri Martin’s son-in-law, Jean-Louis Triaud met us in the front lobby of the modest but stately château and led us to an outbuilding where bottles and glasses awaited. In addition to Saint Pierre, the Martin family also owned the Cru Bourgeois Saint Julien, Château Gloria. This winery was created in the 1940s and therefore was not part of the 1855 Bordeaux classification. Many say that it merits fourth or fifth growth status and is considered a bargain Bordeaux. The LCBO sold its 2016 vintage for $89. It is a big estate with over 120 acres planted 65 per cent Cabernet Sauvignon, 25 per cent Merlot, five per cent Petit Verdot and five per cent Cabernet Franc. Around 200,000 bottles are produced annually along with another 50,000 bottles of the second wine, Château Peymartin. Jean-Louis proceeded to regale us with tales of both châteaux as he poured us samples from each to taste. First was a 1982 Gloria that was, well, glorious. A 1982 Saint Pierre followed that offered up aromas of cigar box, licorice and black currants. Simply delicious. If pressed, I think I enjoyed the Gloria just a bit more. 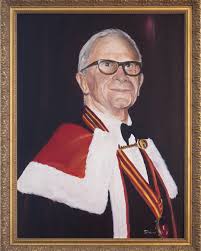 We then traipsed over to the main chateau where we enjoyed chilled glasses of Lillet before sitting down for a formal lunch at the large dining room table. We were joined by Jean-Louis’ wife Françoise and Henri Martin. Henri was a Bordeaux legend having been mayor of the town of Saint Julien for forty years. He wasn’t in the best of moods in that he had just signed over control of his properties to Jean-Louis earlier that morning. Hélène was slated to sit next to M. Martin and was a trifle daunted by the prospect. Becky told her to talk about dogs and grandchildren and everything would be fine. Once seated, I could tell that Hélène and Henri were getting on famously. His once dour disposition had become decidedly cheerful, almost chipper in fact. Later on, Hélène told me that he was an absolute delight.

Now then, I wish I could say the same about the lunch. Things began ominously with a large bowl of something dark brown in an equally dark brown sauce. Someone revealed that it was lamproie matelote (blood-thickened red wine stew of eel and lamprey from the Gironde estuary). Considered a delicacy by the Bordelais, it was not so regarded by this Canadien. Following this gustatory grenade came what I can best describe as mystery meat – grey, tasteless and soulless. We later speculated that it could possibly have been some form of mutton. I must say that the accompanying wines were delicious and adequately compensated. Lunch concluded with an apple tarte tatin and a wee drop of old cognac. You can tell by the photo at right that we had had a wonderful visit to Château Saint Pierre.

As this article is posted, Hélène and I along with daughter Kate and granddaughter Romy will be swanning around southern France. Upon our return, I will bring you up-to-date on our latest vinous discoveries and vintage assessments. In the meantime, do take a peek at our Arthur’s Cellar homepage to learn about our current wines on offer.

This is Jim’s 44th wine blog on Gentleman’s Portion. The search function works really well if you want to look back and see some of our previous articles.