At the helm of the SS Great Britain in Bristol

Britain’s success over the centuries has been based on its ships and its navy. I’ve been driving around the island to see a few historic examples that have been rescued, revived or restored.

In the spring we took the train to Edinburgh, where the Queen’s former yacht Britannia, was a highlight of our visit. I told the story in Stop All the Clocks, so I won’t repeat the details here. But that got me thinking about other great ships that have been docked around the coast and continue as museums. On this trip, I have managed to squeeze in visits to three more great vessels.

Travelling to Gloucestershire to see relatives, including my much loved 99-year-old uncle, I realized the SS Great Britain was docked nearby in Bristol. It was but a 10-minute jog off our track to see Brunel’s fantastic ship, a good excuse to visit. 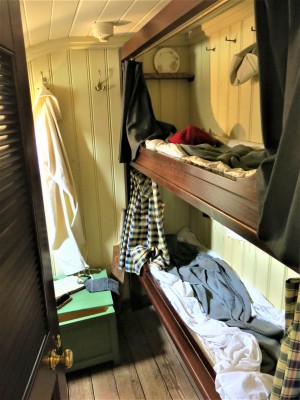 If this is 1st class, imagine steerage

Bristol was once a major shipping centre, a sheltered port and with easy access to the Atlantic. Isambard Kingdom Brunel was already the chief engineer for the Great Western Railway and had supervised the construction of the rail connection from London to Bristol, when the directors of the company decided they wanted a steamship to take passengers onwards to New York. Brunel’s first great ship was somewhat naturally called the Great Western. But it was a paddle steamer and slow in the rough Atlantic. So for his second ship, launched in 1843, Brunel devised a massive single screw. This was ground-breaking engineering: the world’s first propeller-driven iron ship.

The illusion: the hull below the waterline

Her first few voyages were as a luxury liner sailing frequently to New York, in as little as 13 days. The first-class cabins, which have been recreated, were compact but luxurious, with elegant and fine dining included. Compared to their airy quarters and access to the best part of the deck, second class and steerage, where the passengers were crammed into dormitories and had to do their own cooking, must have been miserable. Disaster struck the ship in 1850 when she grounded off Ireland, when her master missed a critical landmark. After she was refloated, she was sold and turned into a much different vessel. With 630 passengers she sailed to Australia, carrying emigrants, mostly in steerage class, until 1875, when she was wrecked again in the Falkland Islands. There she was turned into a storage hulk until she was finally abandoned in 1933.

Her stripped hulk was brought back to the very dock where she was built, in 1970, through the efforts of a group of enthusiasts, floating 8,000 miles on a towed barge. Over the next few years her structure was stabilized from further decay and many of the interiors authentically recreated.

Her hull below the water line was particularly damaged and is now contained in a very dry atmosphere, cleverly separated from the elements by a glass roof. On top of the glass sit a few inches of water giving the illusion that the SS Great Britain is ready to float out of her dock once more. Although our visit was quite short, this is the sort of museum I could visit many times. 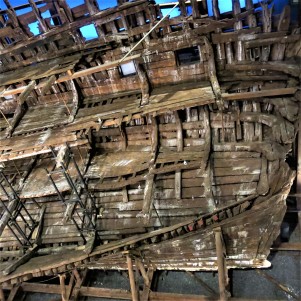 At the stern: what’s left of the Mary Rose

Our tour continued to the south coast, and while my other half was occupied with family matters, I drove on to Portsmouth to check out the Mary Rose, once the flagship of King Henry VIII’s navy. In spite of her fame, her location was hard to find with very poor signage in the town. Then I discovered that I should be looking for the Historic Dockyard. Be warned: it’s a huge site with lots of walking and the parking is another 400m away. Once there, I made for the Mary Rose Museum, which houses the remains of what was once a great warship.

On her final voyage in 1545, top heavy with guns mounted on added structures and a full crew, she capsized in the Solent and sank with most of the hands lost. The wreck was discovered deep in mud and eventually lifted onto a barge and towed to the custom-built museum that now surrounds her with a controlled atmosphere. It’s fascinating to see the bare bones of the vessel, less than half of which survive. All that was above mud rotted away, but most of the artifacts fell into the mud and thousands have been preserved, so there are a wealth of goods, coins, skeletons and cannon on display. Even the ship’s dog is there, built like a rat catcher.

Clever projections into what were once cabins or working areas of the ship, show life-size crew at work or war, so one can imagine how life must have been in the 16th century. The wreck was rediscovered in 1971, raised a decade later after years of very hard work, and the museum finally opened in 2016.

Less than 100 yards away lies Nelson’s flagship on which he perished in 1805 at the Battle of Trafalgar. HMS Victory is currently undergoing a 13-year, £35 million conservation project. Her masts have been removed, the visitors’ gallery closed until 2020, and her sagging hull is being newly supported. Nevertheless, the ship is an imposing sight and I walk around her hull, amazed at the size of her. I shall return another day, when the work is completed.

Near the dockyard entrance is HMS Warrior, launched in 1860, and driven by both sail and steam, she was the largest, fastest and most powerful warship in Queen Victoria’s navy. At the time of her launch she was the latest design in naval technology, but her very success meant she was soon outdated. After only 22 years’ service, her hull was used for storage. Fully restored, she has been back home in Portsmouth since 1987.

By the time I get to the ship, the rain is pouring down in torrents, so I give her a passing wave and run for the car. She too will have to wait for another day, but on my next visit I will be able to take in more of the many exhibits in the Historic Dockyard.

On a previous visit to London, I took a river boat down to Greenwich, with the objective of visiting the Royal Observatory on the zero meridien, the National Maritime Museum and the Cutty Sark. The latter had been damaged in a fire in 2007 and was still undergoing extensive repairs, so that’s a third ship I shall have to visit again.

Cutty Sark was built in Scotland and the clipper’s first commercial voyage left London in 1870 for Shanghai, where she picked up an amazing 1,305,812 lb of tea. Although she made eight more trips for the tea trade, she was never quite the fastest ship in the trade. After many adventures, she was towed into Greenwich in 1954 and restored. A disastrous fire closed her down for my last visit, but she is once again restored, reopened and awaiting my return.

There are other ship museums in the UK, which I will seek out, such as Capt. James Cook’s Endeavour, a recreation of which sails out of Whitby, Yorkshire, but for now I’ll treasure my three recent discoveries. Great ships indeed.

This is Nigel’s 259th blog on Gentleman’s Portion. The SEARCH function at the top works really well if you want to look back and see some of our previous stories.