Ever in search of new elixirs to tantalize the taste buds of his wine club members, our wine scribbler Jim Walker and his wife Hélène Buisson journeyed to the Alsace wine region of eastern France where they found what they were looking for, and much more. 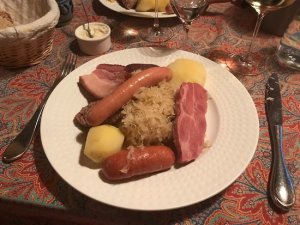 It was the fall of 2008. The sleek TGV train whisked us the two and a half hours from Paris to the center of Strasbourg as we started our quest for Alsatian wines worthy of the Members of Arthur’s Cellar Wine Club. A taxi shuttled us and our staggering collection of luggage (my back-pack and light suitcase included) to l’Arrière-Cour, a delightful, well-situated bed and breakfast that in a previous life had been a machine shop. It was a thoroughly modern, restful sanctuary that served as a second home for a Member of the European Parliament. 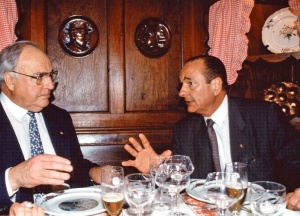 After depositing our bags (the services of a hardy young weightlifter would have been greatly appreciated – mercifully there were no stairs), thoughts naturally turned to lunch and that sumptuous Strasbourgian staple, choucroute garnie. This marvel is a massive assemblage of sauerkraut bathing in white wine, sausages, various renditions of pork and an endless supply of wonderful local mustard to ease it all down. Perhaps our hostess Sabrina Wells could recommend a suitable establishment for our assault? Go to Chez Yvonne where President Jacques Chirac was a frequent diner, she suggested. This sounded just right to us.

Chez Yvonne couldn’t have been more perfect. It had all of the charm and ambiance of an old German wine house coupled with the care and attention to the menu and carte des vins that only the French can bring to the table. I’ll spare you the lip smacking details of our marvelous meal and the luscious 2002 Leimental de Wettolsheim Riesling from Domaine Barmès Buecher that went with it, but suffice to say it was wonderful. At the end, we struck up a conversation with the very knowledgeable sommelier and asked him to recommend a small, family-run Alsatian winery that he felt made the finest wines in the area. I know just the one you are looking for, he enthused: Domaine Vincent Stoeffler. 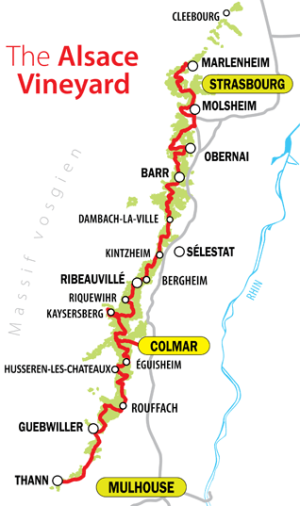 Armed with this information, we set off the next day in search of this font of great Alsatian wines along the 170 kilometre Alsace Wine Route, with its picturesque rolling hills and quaint fairy tale villages. The Alsace (Elsass in German) region of eastern France lies between the west bank of the upper Rhine River and the eastern slopes of the Vosges Mountains near Germany and Switzerland. Ownership of the area has bounced back and forth between France and Germany like a ping pong ball. Recent history saw the Germans take control of the area in 1861 when it was ceded to them following their victory in the Franco-Prussian War. It returned to French hands in 1919 as part of the Treaty of Versailles which formally brought World War I to an end. It has remained proudly French ever since.

To my mind, this Franco-Germanic heritage has resulted in a marvelous gastronomic mélange well-evidenced by the wondrous choucroute garnie. This carries over to the Alsatian viticulture where, as in Germany, white wines prevail anchored by the Riesling grape. The big difference is that the Alsatian Rieslings are for the most part much drier due to the fact that residual sugars are limited by means of more complete fermentation. In addition to Riesling, Pinot Gris (called Tokay d’Alsace till early 2007), Auxerrois, Gewurztraminer (my personal favourite with its scintillating scents of lychees, grapefruit, roses, pineapples and exotic spices) and Pinot Blanc make up the bulk of white wine production. Sylvaner, once the most popular, Muscat and Chasselas contribute a much smaller share. Pinot Noir is used for making a rather anaemic red wine and blush. There are also two late harvest classifications, Vendange Tardive and Sélection de Grains Nobles along with the increasingly popular fizz, Crémant d’Alsace. 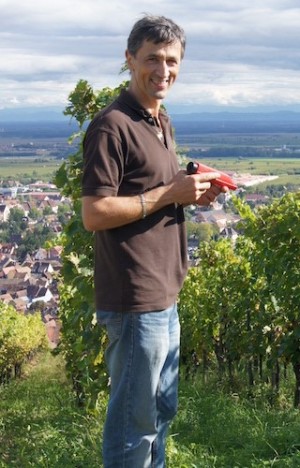 Vincent Stoeffler amongst his vines

The Romans were growing grapes and producing wine in the area over two thousand years ago. Today the vineyards cover some 40,000 acres of which three-quarters are classified for the production of AOC Alsace wines, four per cent for AOC Alsace Grand Cru and the remainder as humble Vin de Table de France. There are 51 Grand Cru parcels in Alsace, each delineated by site or village and all located on the slopes, not the river plain. These Grand Cru wines are subjected to stricter appellation rules. Alsace has over 4,000 grape growers, almost a thousand of which produce wine as well. About 60 per cent of the region’s wine production is sold by co-operatives or large négociants.

The wines of Alsace are typically from a single variety of grapes and are labelled as such. They seldom see any oak and the Alsace AOC wines are sold in the traditional coloured conical bottles called flutes d’Alsace, like most German white wines. 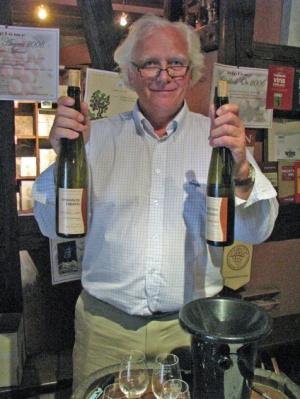 Now back to our quest: Domaine Vincent Stoeffler is located in the little town of Barr. We parked the rental car in a church lot and walked the short distance to the modest collection of buildings that is Domaine Vincent Stoeffler. We luckily found Vincent (we had not made an appointment) and explained our mission. Soon we were in his tasting room (definitely a good sign) where he told us that he had 35 different labels (an even better sign). Here are but a few of them: Riesling Kirchberg de Barr Grand Cru; Riesling Schoenenbourg Grand Cru; Gewürztraminer Vielles Vignes and Riesling Muhlforst – Lieu Dit (a small geographical area bearing a traditional name). Then, demonstrating a splendid division of labour, Hélène started talking and I started tasting. I knew from first slurp (an elegant 2005 Riesling Kronenbourg) that we were on to something exceptional.

Vincent Stoeffler is a certified oenologist who took over and combined his family’s vineyards in 1988. Since then he has tended to his vines with loving care and has gained recognition on the world wine stages for his very special Alsatian wines. He cultivates his vines of the eight traditional grape varieties with great respect to tradition, nature and modern science. The winery is certified organic. His are the epitome of terroir driven wines as the 35 labels, most from single plots of land, attest.

The domaine encompasses just under 29 acres of carefully tended vines scattered throughout the Barr-Mittelbergheim and Riquewihr-Ribeauville areas. The vines are carefully pruned to control yield and ensure that only the best fruit reaches harvest. All of their grapes are hand-picked and then pressed whole, with a slow, moderate pressure and minimum manipulation. Moderate filtration ensures that the wines are not stripped of character. They then rest on their lees in large oak casks, allowing aromas to develop and living yeast cells to act slowly on the wine over time.

Robert M. Parker, Jr. frequently reviewed Vincent’s wines giving them glowing reviews. His impressions have been supported by consistent top ratings from the European wine press including those by the prestigious Revue de Vin de France that has done so every year since Vincent took over. 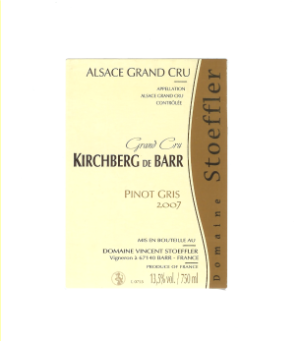 The Domaine Vincent Stoeffler wine that really sent me soaring that day was a 2007 Pinot Gris Kirchberg de Barr Grand Cru. Here’s how I described it when we offered it to our wine club members a few month later, for $36 the bottle:

Foie gras! The second I tasted this magnificent, sumptuous wine I wished I had a bit of foie gras to accompany it – particularly the way Mostafa Rougaïbi prepares it at his very special BYOB restaurant, La Colombe in Montreal. This light yellow beauty has an aroma chock full of peaches, apricots, honey and very hard to define spices. It is so refined in the mouth, yet full and round with a firm background of acidity. It goes on forever. It would benefit from another year or more of bottle aging to develop its underlying complexity. It is simply an unbelievably luscious wine.

We represented Vincent’s wondrous wines in Ontario for several years. But, sales were decidedly disappointing. At the time, Alsatian wines of any kind were a tough sell and Vincent’s top level wines commanded a premium price, often over $30 the bottle that furthered buyer resistance. And, his wines tended to be a bit unctuous, almost oily, and that turned off potential repeat sales. Sadly we ended our relationship with this fine winery a few years later. 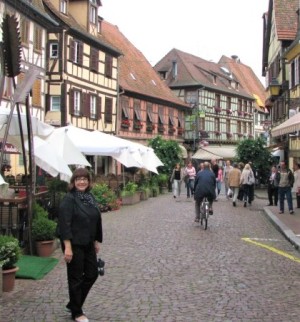 Before I conclude, I want to tell you about a happy instance that occurred while we were in Strasbourg. It was early one afternoon on a dark and dreary day. All of a sudden it started to pour and we were without umbrellas. Providence was with us for an inviting bar presented itself nearby. We ducked inside to find a very large, dimly lit room with a marvellously long dark wood bar. Behind it was a jolly chap who commanded a battery of 36 beer spigots. I was decidedly thirsty and felt that a brew or two was just what the doctor ordered. But, with such a selection available, which one should I choose? The bar tender had a compelling suggestion. Why not try them all? Why not, indeed? (I didn’t ask Hélène what she thought of this delicious notion.) I should also point out that there was no one else in the bar at the time. He proceeded to produce several small glass steins and, starting at one end of the taps, began pouring all sorts of Belgium, French and German suds for my tasting pleasure. I wasn’t too fussy about the fruit flavoured brews, but the rest of them were quite wonderful. I must confess that I didn’t get anywhere near sampling them all (but I did give it a heroic go). I also have no idea if it was still raining when we departed.

We thoroughly enjoyed Strasbourg and the Alsatian Wine Route and intend to return for a much longer stay. Locals told us that it is particularly enchanting at Christmas time. If you haven’t had a chance to visit this charming bit of France, we highly recommend you spend some time there. Don’t forget to savour the choucroute garnie at Chez Yvonne.

For those of you residing in Ontario, take a peek at the wines we currently have on offer at Arthur’s Cellar Wine Club. 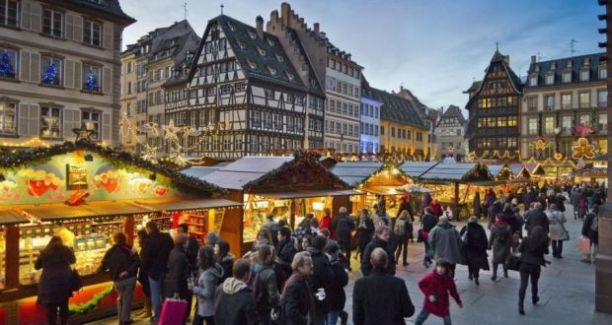