When I first wrote about shakshuka in the spring of 2013, almost no one knew what it was, let alone the name, but now there are plenty of spots in Toronto which serve this hearty Middle Eastern eggs and tomato dish.

Shakshuka garnished with chopped basil and sprinkled with paprika, sides of bangers and fresh baguette

This was fare I’d eaten for years without knowing its name. I’d first had it in Benghazi, Libya, where my family languished in the late 50s. Not surprisingly, that’s where it originated. Libyan Jews took the dish with them to Israel, where it has become a popular breakfast meal. Shakshuka comes from the Arabic, meaning haphazard. Yemen and Tunisia also lay claim to its origination, but I like Libya’s claim better. After all, they don’t have much else going for them. 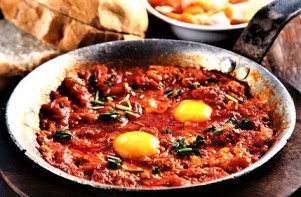 Israel’s Dr. Shakshuka stirs in the egg white without breaking the yolks

Wherever you eat this, you will be offered variations. Even in Toronto, where I’ve tried shakshuka at restaurants such as Edward Levesque’s Kitchen, sadly now closed, to Fat Pasha, closer to home on the Dupont Street Strip. Aroma, an espresso chain from Israel, opened here in 2007 and has expanded to more than three dozen outlets. I’m not a fan of their version, which is topped with fried eggs.

More recently, another Israeli chain has opened as Café Landwer, with a suburban location complemented by a new downtown location and two more to open soon.  Their halloumi shakshuka is one of several varieties available, with the eggs baked in a tomato sauce studded with big hunks of cheese and spinach. I lean toward the version served with merguez sausages.

It’s also served in many varieties at Dr. Shakshuka, a quirky restaurant in old Tel-Aviv, which offers Kosher Libyan fare. The good doctor adds paprika and stirs the egg white into the tomatoes, without breaking the yolk.

Further validation can be found in Yotam Ottolenghi‘s cookbook, Jerusalem. Ottolenghi is the London-based chef, Israeli-born to an Italian father, and a go-to favourite of mine for vegetarian recipes. When in London, I enjoy dining at one of his six restaurants, since visiting his first in Notting Hill, my old stamping grounds, more than 20 years ago. Chef Ottolenghi swears by coriander (cilantro), although I prefer basil, ever since I tried Chef Levesque’s version. Now, in England as in Toronto, shakshuka has become ubiquitous.

Every chef and every regional variation suggests different vegetables and spices, but all start with ripe tomatoes. If tomatoes are out of season and watery, then by all means use canned. Then it’s up to you if you add green, red, orange or yellow peppers; paprika, cayenne or Tabasco; onions, or garlic or both; basil, spinach or the Tunisian variation of zucchini (courgettes); and garnish with coriander, basil, parsley, paprika, cayenne or a combination of some or all.

Sausages are often presented alongside, although in Kosher and Muslim countries they are likely to be merguez, spicy lamb sausage. As a Brit, I favour pork bangers, but it is really your choice.

Finally, bread is critical for mopping up. Sometimes, I serve thick hot buttered whole wheat toast. Other times I prefer a long French baguette, cut into chunks at the table, or toasted. Just make sure there’s plenty for all and enjoy this outstanding Middle Eastern comfort food.

Featured image: Shakshuka garnished with parsley and paprika and toast for mopping up.

This is Nigel’s 267th blog on Gentleman’s Portion. The SEARCH function at the top works really well, if you want to look back and see some of his previous stories. The link to Gentleman’s Portion: The Cookbook is now live, well priced at $9.99 or £9.99.