THE TREASURE ON THE LAKE

Bellagio: the pearl of Lake Como

Located near the border of Switzerland in the alpine mountains just 35 miles north of Milan, the Italian Lakes District offers some of the most spectacular scenery in the world. In fact, the region is so beautiful that poet William Wordsworth once called Lake Como ‘a treasure whom the earth keeps to herself.’

It was late afternoon by the time our train reached the charming town of Varenna, some 60 minutes north of Milan in the heart of Lake Como.

One of five major lakes located in the shadow of the Swiss Alps (the other lakes are Maggiore, Lugano, Iseo and Garda), Como’s beautiful coastal villages and surrounding snow-capped mountains deliver the type of stunning scenery that has made these glacier waters the prize of the Italian Lakes District.  Lake Como also boasts historic lavish villas, gorgeous gardens, and a number of famous residents including Hollywood A-lister George Clooney and his wife Amal.

After decanting our train in Varenna on the east coast of Lake Como, we (me, Gail and our friends Barry and Toni) walked to the town’s dock and boarded the local ferry for the 15-minute voyage to the town of Bellagio. Located at the northern end of a peninsula that separates the central part of the lake into two fingers, Bellagio starts at the water’s edge and runs up a hill lined with narrow cobbled streets filled with shops, restaurants, hotels, and historic buildings. However, while the town is famously known as “la perla del lago,” if you’re on a budget, there are some lovely little towns scattered around the lake that offer less expensive accommodations, including Varenna.

It was nearly 6:00 pm by the time we checked into our lake view room at the rather modest Hotel Excelsior Splendide, so we made our way down to a waterside patio to watch the sun set while sipping Aperol spritz. We then headed to Terrazza Barchetta, a cozy Italian restaurant that has been serving up terrific Lake Como-style cuisine since 1887, and features a lovely covered terrace overlooking the centre of town. We had a wonderful meal that included squash blossoms, Tagliatelle Norma (with eggplant sauce), and local fresh white fish.

The next morning we took a ferry from Bellagio to Lenno, which is a small town on the west coast of Lake Como near the magnificent Villa del Balbianello. Rather than rent a car, we preferred to take the local ferry service which provides frequent and inexpensive service to the lake’s main towns, including Bellagio, Menaggio and Varenna.

Perched on a beautiful promontory overlooking the lake, Villa del Balbianello was built by Cardinal Durini as his summer residence at the end of the 18th-century on the remains of a Franciscan church. After the Cardinal died in 1797, the property was owned by a variety of people before it eventually fell into the hands of a prominent businessman from Milan, Guido Monzino, who was an avid collector and famous explorer. After Monzino’s death in 1988, the property was left to the National Trust of Italy, and has since been open to the public.

Villa del Balbianello is comprised of three primary attractions – the loggia, the villa and the garden. The interior of the villa extends over several levels and features precious tapestries, oriental carpets, and historic furnishings. The elegant loggia, built at the pinnacle of the promontory with superb views of the lake, and the terraced garden leading up to it, is so beautiful that it has been used for settings in a variety of Hollywood films, including where James Bond recovers from injuries in Casino Royale.

The loggia at Villa del Balbianello

After finishing our tour of Villa del Balbianello, we walked back to Lenno for a quick lunch before returning to Bellagio for some exploration and shopping.

Bellagio is small enough that we were able to easily traverse the entire town in a few hours, with plenty of time for shopping, cocktails and gelato. In particular, we found some great silk scarves at Azalea, and some fabulous designer bags and accessories by master artisan Pierangelo Masciardi at Arte e Moda.

Early the next morning we caught the ferry in Bellagio and headed to Varenna, where we had arrived two days ago by train but had not yet had an opportunity to explore. This small but quaint town is a great place to explore on foot because almost everything of interest is no more than a 20-minute walk from the ferry dock.

After leaving the ferry, we walked south along a beautiful lakeside path called the “Passarella,” which connects the dock to the old town center. The path offers stunning views of the lake and the old villas that look over it, and winds its way to Varenna’s harbour and up to the town’s main square, Piazza San Giorgio. The square features several grand churches including the 13th–century Chiesa di San Giorgio, and the 19th-century Hotel Royal Victoria where Queen Victoria once registered herself as the Countess of Claire to avoid public scrutiny.

We kept walking south and eventually arrived at the lush gardens of the lakeside Villa Monastero. The villa was originally a 12th-century Cistercian convent that was closed in 1567, and eventually became the residence of the De Marchi family who donated it to the public in 1936. Today the estate features a museum filled with ornate furnishings from the 19th-century, and a lovely botanical garden. While Villa Monastero provides a beautiful setting on the lake, it is not nearly as spectacular as the grounds at Villa Carlotta which boast a neoclassical building with a sculpture gallery surrounded by a stunning garden.

As we had worked up a ferocious appetite and thirst with our morning tour, we returned to the harbour for a delicious lunch of pasta and rosé wine at Nilus Bar, a lovely lakeside restaurant. We then took a mid-afternoon ferry back to Bellagio for a much-needed nap, followed by lakeside cocktails and a wonderful dinner of risotto and veal at Restaurant Bilacus.

After a spectacular 17-day trip that had taken us to Geneva, Lake Annecy, Milan, the Cinque Terre, and the Italian Lakes District, we would be leaving tomorrow for Milan and our return flight home. But for the moment, all we could think about was how lucky we were to be spending our final evening soaking up the beguiling beauty of “la perla del lago,” on a lake that poet William Wordsworth once called “a treasure whom the earth keeps to herself.” 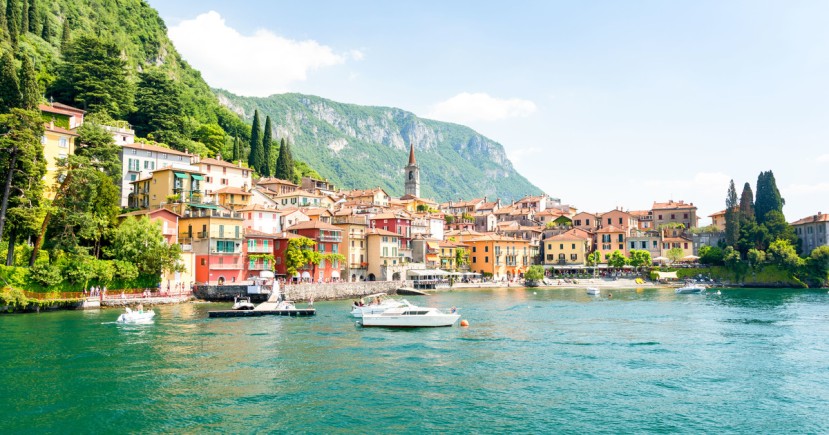 This is David’s 81st post on Gentleman’s Portion. The SEARCH function at the top works really well, if you want to look back and see some of his previous stories.