GIVE US THIS DAY…

I’ve been searching for flour and yeast since the first days of panic buying, but it disappeared faster than toilet paper. Now, I’ve come across a very small supply of both and fresh homemade bread has made my day. In the hope that you too will have a lucky find, I give you this day your daily bread.

The desire for bread, in our western society, is almost visceral. We have been eating bread of some sort or another for about 30,000 years. The agent which makes bread rise is yeast, for which I have been searching high and low. Even if I’d had a left-over supply, it would probably not be any good as yeast has a limited shelf life—it is a fungus and alive. It will live in a dried form for a while, but not forever, especially not in the back of a hot, dry storage cupboard. Even kept in the fridge it will not last more than a few weeks.

Originally, yeast added itself to the dough mix by accident. Bakers left their unleavened dough out in the open until some yeast spores drifted by and the process of fermentation began, which led to gasses being formed in the mix, making it light. Many thousands of years ago, someone noticed that bread made near a brewery, which also used yeast in the process of making beer, rose up more fully. Some think this happened the other way round, and that brewers set up shop near bakers, but we’ll never know for sure. Suffice to say, that for most of history the yeasts for brewing and baking were the same. Along came modern methods and we now use something called baker’s yeast, which provides a standard product and more consistent results. 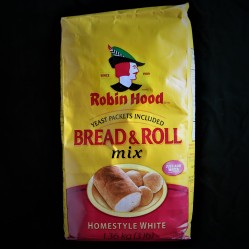 Tucked away on the back of a shelf at a nearby chain grocery store, I recently discovered two small bags of flour. One had been split open and was spilling all over the shelf. The other was a ready-mix bread, which I would normally have scorned, but it came with yeast. So, feeling that beggars could not be choosers, I quickly deposited the last whole bag of flour in the universe into my laden buggy. Coincidentally, later that day while chatting with a *baker, he offered me a gift more precious than gold—a small tub of fresh yeast.

Back home, I decided that I would give the ready-mix a try and then compare it with my own bread recipe. Happily, the mix turned out fine. I made two loaves, one a traditional rectangle shape and the other a round farmhouse size. The result was delicious, light and fluffy, golden and crusty on top. A couple of days later, I toast the last of the bread and find it makes an excellent start to the day with lashings of butter and marmalade.

My own tried and tested recipe has a few extra ingredients, which I think give it a better flavour: a fresh egg and real butter. The donated yeast fizzes up, so that it almost overflows the small bowl I used to ‘proof’ it in, which promises a well-risen dough. It does not disappoint. My loaves rise light and true in the pan and are as good as I expected them to be. Unfortunately, my last supply of flour does not allow me to make more from scratch, but here we are with enough bread in the house to last the week and no regrets. *Perhaps next week I will find a further supply of flour. 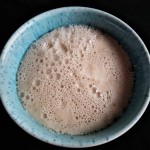 OPTIONS: Substitute honey for the sugar or add 2 to 3 TBSP dried herbs to the flour before mixing to make herb bread.

*THE GOOD SAMARITAN: Not to make too big a deal about this, because I don’t want the world trooping to his door to borrow a cup of yeast, but the good neighbour was Ed (Eduardo Martins) co-owner, with his wife Izabelle Tenorio, of Belle’s Bakery on Dupont Street, Toronto. During the lockdown, Ed has also stocked a small supply of other necessities such as sugar, pasta and canned tomatoes (and even toilet paper!) as well as a well-stocked fridge of home made sauces, soups and spreads, to complement his tasty baked goods and coffee. Ed has promised to get in some flour as well, as soon as he can find a supply. At the moment he can only buy in bulk and I have promised to help him re-package, if needed! Go for a coffee and sample pastéis de nata, fabulous Portuguese custard tarts to which I have become addicted, or outstanding empanada, Argentina’s answer to a meat pie. 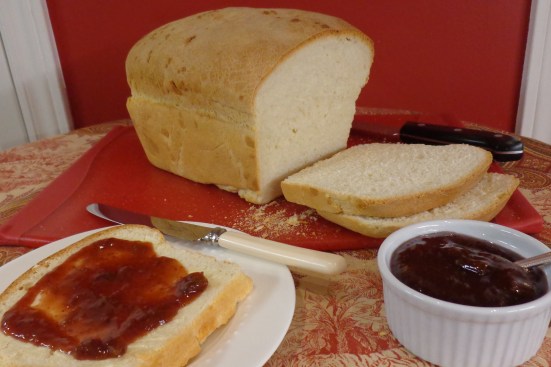