MYSTERIES IN THE LANGUEDOC

Many strange things have occurred in the land of the Cathars, even in recent times. Something very odd happened to a shipment of wine that was produced there and wound up at the Liquor Control Board of Ontario. And, what became of the nice lady who made that wine? Our wine scribe Jim Walker tells us all about the unusual goings on at Domaine l’Aiguelière in the heart of the Languedoc wine region of southern France.

It was early 2008. Christine Commeyras found us while surfing the Internet looking for wine importing agents who might be interested in representing her Domaine l’Aiguelière wines from the Côteaux du Languedoc (now called the Languedoc AOC appellation). She thought that the Arthur’s Cellar Wine Club sounded like a perfect way to get her wines introduced into the Ontario marketplace. After all, her products were already a big hit in Quebec. So she got in touch and asked us if we were interested?

Hmmmm! About the only thing we knew about Domaine l’Aiguelière was that its vineyards were located near those of Domaine La Croix Chaptal owned by our old pal and wine club supplier Charles Pacaud. Charles was happy to vouch for Christine and said her wines were first rate. Further, he was quite alright if we decided to represent them along with his wines. A little more research revealed that Robert M. Parker, Jr. regarded Domaine L’Aigulière as an ‘Excellent’ producer in his ‘Parker’s Wine Buyer’s Guide’. He has also rated their luxury cuvées, Côte Dorée and Côte Rousse in the mid-nineties as did The Wine Spectator. Things sounded very promising!

We were delighted to discover that Christine, like us, planned to attend the 2010 Vinisud Wine Exposition in Montpellier, a delightful city in southern France. We agreed to meet up with her there and taste her wines.

And so we did (here’s a recap of our activities that week). Christine was a delight, and so were her wines. She explained that her family had been growing grapes on the Larzac plateau for generations and traditionally sold them to the local co-op. But her father Aimé, who had been president of the Montpeyroux’s grape growers cooperative from 1974 to 1984, became exasperated with the poor quality of wines that were being produced from his grapes. So, in 1987 he decided that he would vinify his own wines in partnership with Claude Villar and assisted by the noted oenologist Dr. Pierre-Louis Teissedre. 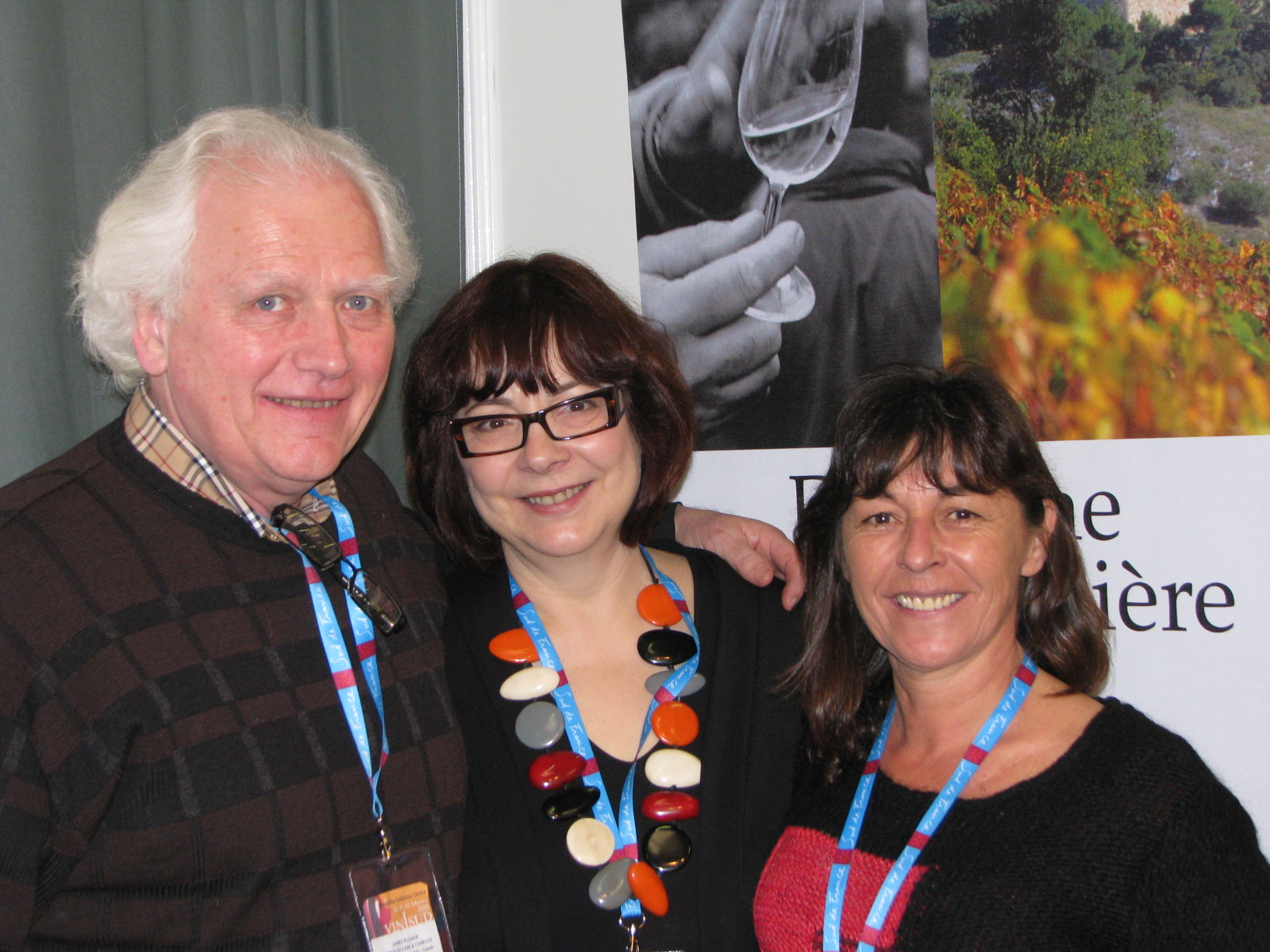 Together they created Domaine l’Aiguelière. From the outset they vowed to make the best wines possible from their nineteen different rocky plots lying about 1,000 feet above sea level in this far corner of the Languedoc, once the country of the Cathars. They followed organic growing principles and intervened as little as possible, letting nature work its magic in their vineyards. A similar approach was taken to their winemaking–modern in technique, but guided by traditional practices. The results were sublime Syrah and Grenache based wines of unique character and distinction. In 1997 Christine took over responsibility for the estate and followed brilliantly in her father’s footsteps. (Sadly, Aimé Commeyras passed away shortly after we met Christine.)

While all the talking was going on, I was doing what I do best … tasting the wines. First came the crisp, dry 2007 Sarments Blanc, a delicious white wine made from equal parts Viognier and Sauvignon Blanc. Next at bat were several vintages of the unoaked Tradition made of 60 per cent Syrah and 40 per cent Grenache from vines averaging 45 years of age. Then came a 2006 Tradition aged in one year old oak barrels. That added a nice tannic backbone to the wine. Finally, and what a way to start the day, were the 2006 Côte Dorée and Côte Rousse.

The two super wines of pure Syrah from vines averaging more than 60 years old were aged in different varieties of new oak (Allier and Nevers respectively) for a year. These were wondrous monsters–complex, full and most compelling.

Here are my tasting notes for the 2006 Côte Rousse:

A dark, brooding inky purple, this wine is simply massive (a real fruit bomb as

Robert Parker would say). Aromas of raspberries, blackberries, black cherries, pepper, nutmeg, garrigue, chocolate, anise, tobacco, coffee and much more leap from the glass. In the mouth it is fine and racy, concentrated and complex and oh, so satisfying. It is full, well-balanced and opulent with splendid tannins and a very long, lingering finish of spices, berries and anise. It needs to stand in a decanter for at least an hour or two before serving – ideally to be served with some really exotic game (woodcock, wild boar or venison ‘cuissot de cerf sauce grand veneur’). This marvel will last for years.

As you might have detected, I loved this wine; my notes concluded with a heavily underscored wonderful.

We placed our wine club order for Christine’s splendid wines as soon as we returned from France: both the oaked and unoaked Tradition (plus a sampler containing three of each) along with the Côte Dorée and Côte Rousse resplendent in their wooden cases of six (plus a sampler case of three bottles each). Member response was enthusiastic. 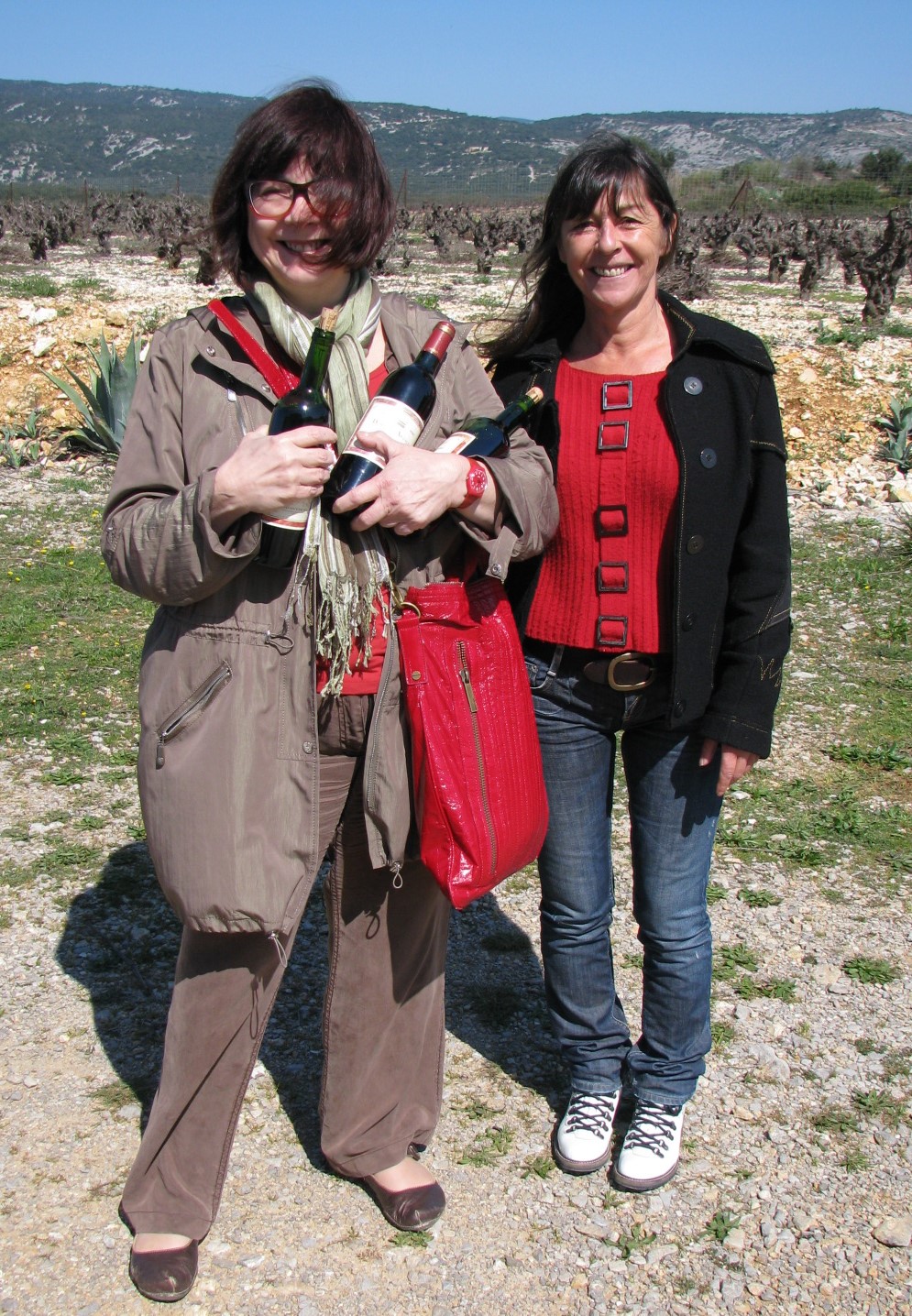 Soon after the LCBO sent their purchase order to the winery, we received a phone call from a very agitated Christine. It had been an extremely hot summer in southern France. “The shipper picked up your wine today in a van that was not air conditioned. I am extremely concerned that the wine will be ruined”, she exclaimed.

I immediately got in touch with my contact at LCBO Private Ordering to complain about this travesty. “Our shipper doesn’t have air conditioned trucks. Their collection point warehouses aren’t air conditioned. The wine is not put in air conditioned containers for the trans-Atlantic voyage and it is a crap shoot as to whether they’ll be loaded above or below decks. And, the LCBO warehouse here isn’t air conditioned either.” Gasp!

A few weeks later the shipment arrived and was tested by the LCBO laboratory. It passed with flying colours, as has every shipment we ordered (more than 1,000 different bottles). Each and every brand in every vintage gets tested. At the time we paid $175 per test for the privilege; it has since risen to $225. In any event, Christine’s wine was cleared by the LCBO and ultimately delivered to our members.

Then the phone calls and emails began. “Jim”, they would say, “my wine from Domaine l’Aiguelière doesn’t seem right, it tastes kind of skunky.” This was definitely not a good way for wine to taste and not at all like the wine I had tasted in Montpellier. I uncorked a few of Christine’s wines that I had included for our personal consumption and gave them a try. Skunky! Foul barnyard smells! Not all of them, but enough to know we had a major problem.

I got back in touch with the LCBO and presented the issue. I wanted the bottles retested in order to determine the problem and to arrange for returns and refunds. Their lab folks couldn’t identify the problem but suspected it might be a little devil called brettanomyces, brett for short. I’ll spare you the technical details, but basically brett is a rogue yeast species that affects a lot of red wines. It is found in aging barrels or in the wineries in general. In small doses it imparts an animal odour that some folks actually enjoy. In large amounts it ruins the wine.

I reminded the LCBO of our concerns about the way these wines had been shipped during the dog days of summer. The LCBO shrugged. And, I asked the LCBO why their expensive lab testing didn’t detect this rather obvious problem. “We don’t test for that” they helpfully responded. But they generously agreed to take back any unacceptable bottles … as long as the winery reimbursed them! I contacted Christine and explained the dilemma. She opined that it was all because of the way the wine was handled during shipping. While quite possibly true, I explained that she would unlikely receive any more orders from the LCBO if she failed to comply. Begrudgingly, she did.

We sent out notices to our members alerting them to the taint problem, recommending that they try their wine and to return any suspect bottles to their local LCBO outlets. Surprisingly, fewer than half of the bottles were ultimately returned. The LCBO billed Christine for them and she paid.

Christine Commeyras with her wines

On our annual Provençal pilgrimage the following spring we dropped by Domaine l’Aiguelière and arranged to sample the same wines from Christine’s cellar. They were all pristine; not the slightest hint of brett or anything else resembling a foul barnyard smell. The winery was immaculately clean as well. So what happened to the wine? My theory is that the extremely hot shipping conditions caused trace elements of the yeast to multiply unchecked. Not that the LCBO would ever agree. Thus, it remains a mystery. (From then on we have not shipped during the summer.)

We did place a second order for the Domaine l’Aiguelière wines, but it was very small. The damage had been done to its reputation. That was our last order. Their wine still sells well in Quebec and the folks at the Robert Parker Wine Advocate continue to rate the wines very highly. C’est la vie.

In the course of checking background material for this piece, a second mystery cropped up … what happened to Christine? There is not a word about her on the winery’s website (which doesn’t function well) or in any other published material. Here’s all I could find:

After the death of Aimé, his younger brother Auguste took up the winemaking reins, assisted by Marc Esclarmonde, a young and very competent oenologist, and the team is now supplemented by Yu Huang, a student from China who stayed on at the domaine following a very successful internship.

Not a mention of Christine anywhere! She has disappeared as completely as have the Languedoc Cathars.

PS: We have several shipments of wines (reds, whites and rosés) from the southern Rhône on their way to the LCBO. Ontario residents can keep an eye on their availability at Arthur’s Cellar Wine Club. 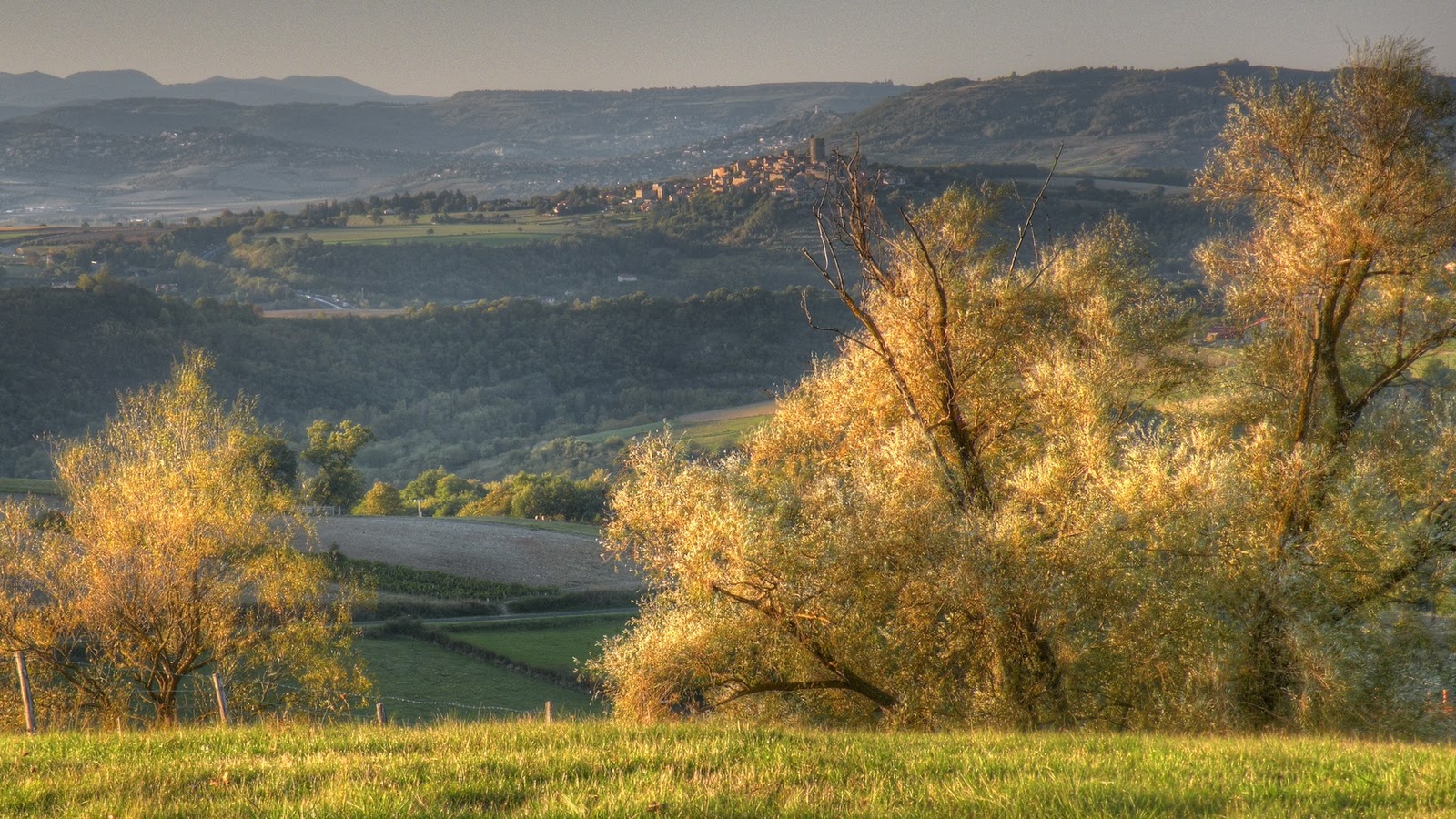 Featured Image: The Languedoc, land of the Cathars.

This is Jim’s 52nd wine post on Gentleman’s Portion. Please “like” our blogs, if you have enjoyed our musings, or add a “comment” — clickable at the top or bottom of each story. The search function works really well if you want to look back and see some of his previous articles.