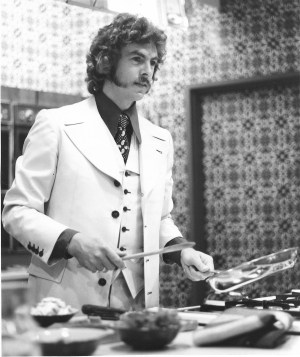 Cooking up a storm in my Travolta suit

I’ve always loved food. As a completely self-taught cook, I learned the hard way, by trial and error. The benefit for my readers is that anything I write about has been well and truly tested, by me, in my own kitchen. Sometimes I make mistakes and on those occasions I go back to the drawing board and try to figure out what went wrong. I try to write my recipes with the complete novice in mind, as I once was, with simple step-by-step instructions. All I ask is that you trust me and follow the recipe exactly as I’ve written it, at least the first time you try something. After that you’re on your own.

Readers tell me they like the stories which precede each recipe. That’s how I like to write. To put everything in context and remember where I was when the idea for something came to me or when I cooked something special. So there’s no particular order to the recipes I publish, they just come out as I fancy. When I was young I loved to cook. It was basic boy’s boarding school food. My favourite was baked beans on fried bread. Then I discovered cookie cutters. Fried bread came in all different shapes and sizes, as if it changed the meal, until my sister cried: “No more baked beans and fried bread.” Then I learned to cook something else.

In my teens, I lived (when not at boarding school) with my older cousin, the actor Oliver Reed. He taught me how to drink, but I had to learn how to cook for myself, mostly along the lines of spag-bol, as spaghetti Bolognese was called in those days. I learned by more by eating out, and then wondering how the food was made. I had Larousse, but that is more of a dictionary of French cooking, than a  recipe book, and my family all cook, very well in fact, so I suppose I came by my skills honestly.

Years later, in Canada, a friend who published a singles magazine asked me, over a convivial dinner naturally, to write a food column, and so my professional career as a cook started. A few columns later, a publisher came calling and asked me to write a cook book on the singles theme, and How to Eat Well and Stay Single was born. The bachelor cookbook paperback did quite well, selling a few thousand copies, before the publisher went bankrupt.

By complete coincidence, my wife Diane was involved in the food business for a while, as editor of the Canadian magazine Epicure. It was a breakthrough publication for its time, but eventually found it hard to compete against such American entries as Gourmet, on a Canadian budget. The benefit for me is that I have an utterly honest critic and skilled editor standing behind me and pointing out the error of my ways, before they hit the web.  Sadly, as a footnote, Gourmet itself folded in 2009 after 71 years of publication. 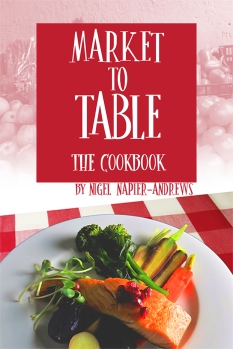 During the making of my TV series Escapes with Nigel we had several food experiences. I got to bake bread at the Spirit Tree Estate Cidery, prepare tender stuffed rabbit legs with the chef at Deerfields and set out an amazing antipasto spread at The Farmhouse in Barrie.  This led to my very own food show — called Market to Table — and we ventured out into some of Toronto’s most interesting markets, picked up unusual and interesting food, cooked up a feast in the kitchen with some of Toronto’s brightest and best new chefs, and finally presented it at the table. Six episodes aired in 2016 on a CTV local channel and You Tube and more followed in 2017, with new host chef Dan Frenette. The series also led to a new eBook. Market to Table: The Cookbook is a great a gift idea for yourself, friends, family or anyone who loves to cook, available for about $12 on Lulu.com, i-Tunes and Amazon.

Since then recipes have been piling up here and remarkably, they seem to have a consistent theme: comfort food. I am collecting the best of these recipes, mostly vegetarian, in a new book organized into the four seasons so you can more easily follow the farmers’ crop cycle and support locally grown food. Each recipe is preceded by a story, mostly as they appeared in the original blog, since readers tell me they like these anecdotes. Whether you are a serious foodie, or just like browsing, I hope you find something amusing, entertaining, informative or all three in the tales I tell and the recipes I develop.

Please enjoy reading my food columns under the Simply Food heading, as much as I have enjoyed writing them.